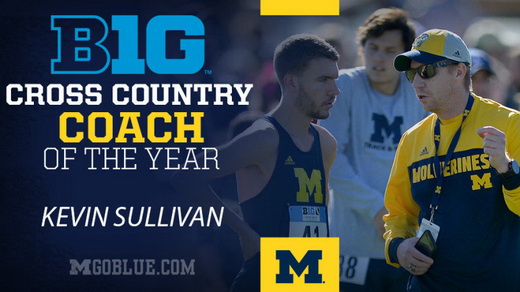 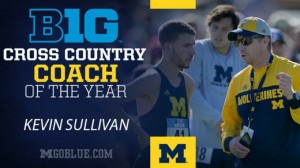 “At the end of the day though, this award really belongs to my guys who have bought into a system and believed in the process that takes them to the championship portion of the season,”

On Wednesday, November, 4th Brantford, Ontario’s Kevin Sullivan earned the NCAA’s Big Ten Coach of the Year award, as voted by his peers and the conference.

The Canadian middle-distance legend guided the University of Michigan Wolverines to their 10th Big Ten Conference Title since 1998 and the 10th in the Wolverines history.

“For me personally, the award really means that I helped to give my athletes the tools they needed to be successful,” shared the three-time Olympian.

Michigan scored 63 points to take the conference crown Sunday, November 1st placing all five of their scoring runners in the top-25. The performance was led by two-time All-American and fifth-year senior co-captain Mason Ferlic from St. Paul, MN. His runner-up placing was the best showing by a Wolverine since Cambridge, Ontario’s Nate Brannen finished in the same position in 2003.

“At the end of the day though, this award really belongs to my guys who have bought into a system and believed in the process that takes them to the championship portion of the season,” added Sullivan.