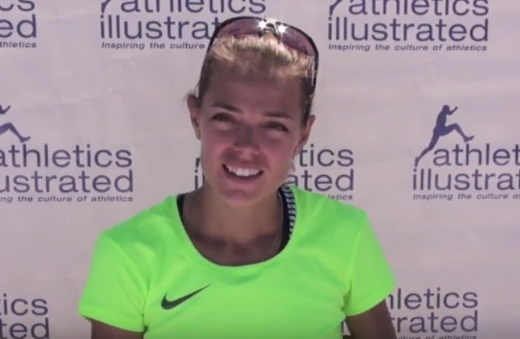 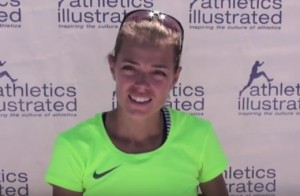 For the second time in less than three days Melissa Bishop stole the show at track meets by handily breaking records in the 800-metre distance event.

Today, at the 28th Victoria Track Classic she won easily, in the time of one-minute and 58.90 seconds. Friday night she took the 2016 Harry Jerome Track Classic all-time record with a 1:58.79 performance. She won in convincing fashion over American Brenda Martinez.

In each race the pacer, Liga Velvere, took the field through 400-metres in 57 seconds.

Asked about the pacing, Bishop told Athletics Illustrated, “Yeah she has been doing such a great job with the pacing. I will have to take her with me wherever I race.”

Bishop earned silver during the 2015 Beijing worlds, breaking the Canadian record in the process, with her 1:57.52 performance.

Asked if she will continue to race before the Edmonton Rio Olympic Trials, she said, “no this is it. I am just going to go home now and get ready for trials.”

Bishop noted that she loves racing both the Victoria Track Classic and Harry Jerome Track Classic, “I really love racing these meets out here, we have come out for the past six years. I feel I always run well here.”

Bishop just needs to finish first or second at the trials, then she is officially a Rio Olympian. The trials take place July 7 to 10th.

“I wanted Olympic standard obviously, but we didn’t go out fast enough, but today I doubled, where seven weeks ago I wouldn’t have been able to do that. Friday at Harry Jerome was the first race where I felt healthy, said Gollish. “I know it is a bit late and a few runners dropped out of this race, but I just told myself to just race it anyway. I had a good final 400.”

Gollish, while looking for Olympic standard (4:07.00), will race in Portland and Guelph before taking in the Edmonton Olympic Trials. Currently there are five women ahead of her in the national rankings for the qualification period.

American Duane Solomon had a bit of a rebound in Victoria, winning the 800-metre event in the time of 1:46.71, after running a pedestrian 1:50.23 Friday night. Second was Anthony Romaniw of Guelph who fought hard to catch Solomon, however, ran out of real estate, having turned on the jets with 200-metres to go. Romaniw was back in about sixth position at the 600m line, it was there where he made a decisive move and finished nearly side-by-side with Solomon, who owns an incredible 1:42.82 personal best time, which he accomplished by finishing fourth in the 2012 London Olympic Games.

Romaniw has recently demonstrated improved fitness having pipped the Canadian standard for the Rio Olympic Games. For the 800-metre event, it is currently just Brandon McBride with his 1:44.50 and Romaniw with his 1:45.94.

In the 1500m race, Victoria’s Brendan Hoff attained world junior standard and a new personal best. Hoff is having 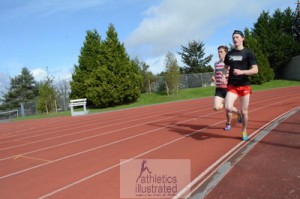 quite the season, as he won the provincial boy’s high school 1500-metres and 3,000-metres championships, breaking both provincial records in the process.

During the Harry Jerome Track Classic he ran a near three second personal best of 3:48.15 while finishing in sixth position. Today he finished in 3:47.38.

“The plan going in was just to get in and stay relaxed as much as possible through 800m and then just try close with everything I have. Coming into the final 300m I was switching gears as much as I could, then really hit the wall with 50m to go, but just pushed through,” said Hoff.

Other races on the day were 100m sprints, 800m and 1500m development races as well as the high jump and hammer throw. Full results are here>>

The Victoria Track Classic is one of five National Track League meets. The others include the Aileen Meagher meet in Halifax, the Speed River Inferno in Guelph as well as track classics in Edmonton, Vancouver and Victoria.

All races including the Edmonton Olympic Trials can be viewed live on AthleticsCanada.tv.