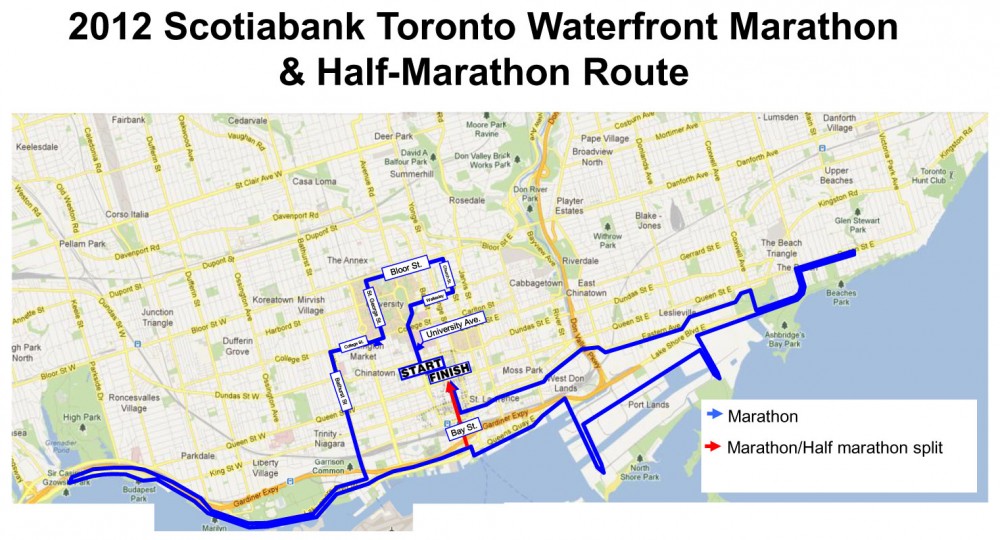 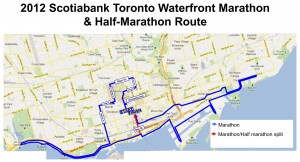 “This is the latest in a series of changes over the past few years that have propelled us towards our Toronto 2015 goal of having a world-class, big-city marathon for Canada — with at least 8,000 runners in the 42k race; 500,000 spectators on the streets; and $5 million a year raised for charity. First was a move to Nathan Phillips Square as our prestigious venue (2008). Then we were able to add The Beach neighbourhood to the course, allowing us the get off the lonely Leslie Street Spit (2010). Last year, we were able to add ‘live’ television and internet broadcasts from CBC.” ‘City-marathon’ mania has swept the world over the last few years: from London, to New York, Chicago, and Tokyo, which had 280,000 applications for 30,000 places this year. They are all about “masses” – of both runners and spectators, with more than 1 million spectators lining the courses, cheering on thousands of recreational runners and some of the world’s best, plus charity runners in flamboyant costumes.

City marathons also run by landmarks that help showcase the city to the world. “The key to all of this is running through neighbourhoods, that not only showcase the city, but make it easy for millions of spectators to merely step outside their front doors to watch some of the most thrilling marathon racing on the planet, up close and personal. It also gives runners not just a great ‘marathon experience’, but a Rome, Tokyo, Berlin or a Toronto Waterfront marathon experience,” said Brookes. “We are enormously grateful to the City of Toronto, to Staff, especially in Transportation, the TTC, the Mayor’s Office and Council (in particular Councllors Kristyn Wong-Tam & Adam Vaughan whose Wards 27 & 20 host most of the new route), for helping make this colossal improvement.”

The dramtic new enhancements fall in the first 10km section of the Course, allowing both marathoners and half-marathoners to benefit. After a one-year hiatus caused by construction last year, Scotiabank Toronto Waterfront Marathon & Half returns to Nathan Phillips Square, with its signature Finish line on Bay between Old and New City Halls. The Start remains on the West side of the Square, on University Avenue, but now proceeds North to Queens Park, East on Wellesley, North on Church Street, West on Bloor past Toronto’s “Magnificent Mile”, South on St.George through the University of Toronto, West on College, passing Chinatown at Spadina and Kensington Market at Augusta, before running South on Bathurst to the Lakeshore, and resuming the old route. This year, the West-end turnaround will be at Ellis rather than Windermere. The East end turnaround will be on Queen at Beach Avenue, allowing the race to cut the tough hill and nasty u-turn at Neville Park, that came at the 34km mark previously.

“I don’t know if this makes it a faster course,” said Brookes, “but it certainly doesn’t make it any slower. One thing’s for sure, we can now say not only, ‘Come to Toronto Waterfront to Run St.Lawrence, Run Swansea, Run The Beach’. We can add:

Run U of T

This will make it much more of a complete “Toronto experience” that includes the Waterfront, but also the vibrant communities just back from the Lake in both East and West End sections.

Brookes adds that the Canada Running Series organizing team is already hard at work to expand its internationally-recognized “Neighbourhood Challenge” programme into the new neighbourhoods.

The changes will also allow organizers to add a wheelchair component for the first time; they will significantly improve traffic flow in the downtown core around GO Transit and Union Station, and for the access ramps to and from the Gardiner Expressway. They will also reduce congestion for participants, allow for growth and an easier first few kilometers, through the implementation of more Wave Starts.

“I think we can finally say we have a Course that we can be proud of, worthy of the 5th largest city in North America,” said Brookes. “We can invite the world ‘TO RUN T.O.’ as our 2012 slogan says, and know that we’re taking the 25,000 participants from 50 countries through some of Toronto’s richest neighbourhoods, and past signature landmarks like Queens Park, The ROM Crystal, and the Bata Shoe Museum. Everyone is going to look great on TV!”

ENTER this year’s Scotiabank Toronto Waterfront Marathon or Half-marathon TODAY at www.stwm.ca before the caps are reached (6,000 for marathon; 12,000 for the half, this year).