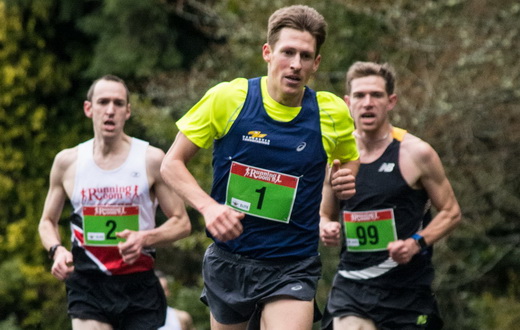 “Run. Because zombies will eat the untrained ones first!”
– Zombie Apocalypse Survival Guide

Steve Mattina may or may not fear the zombie apocalypse – it’s real by the way – and while his BMO St. Patrick’s Day 5K road race is welcoming to everyone of all abilities, he has a special place in his heart for the fastees. The elite, sub-elite and competitive age-group runners seeking a new benchmark, personal best or simply a competitive race experience need to look no further.

For those who live under a rock and may not know, Mattina is dead set on making the race the most competitive road 5K in North America. He is looking to grow the event at the elite end, knowing that the masses will follow – they have been following for 15 years.

At the competitive end, the race is nearly on-par with the Vancouver Sun Run – that 40,000-participant-strong race that takes place in Downtown Vancouver in April. The Sun Run is one of the biggest 10K races in the world and is a must-do, offering a blazing start.

Well, that’s metaphorical-like talk – the clock, like the 1800 other participants, kept on running and at 14:13, Justin Kent of Burnaby, who trains with the BC Endurance Project and Kieran Lumb of Vancouver finished 2-3. The first 10 runners across the line were all under 15-minutes.

By the time North Vancouver’s Ross Henderson crossed the final timing mat at 15:59, 41 runners had finished. A total of 76 finished faster than 17 minutes, 116 under 18 – you get the picture.

That’s a deep field for a local 5K road race.

As it is said, there are more Irish living outside of Ireland than inside and on St. Patrick’s Day, everyone is “Irish for a Day”.

Part of the attraction is the post-race beer. It’s green but your taste buds will never know.

To ensure a competitive start, Mattina offers a first-mile cash prim as a bonus. If you can win the first mile, you earn a bonus of $150, so long as you finish the 5K race within one minute of the winning time; so, no reverse sandbagging!

Last year, Kent and Gay battled hard and both passed the one-mile timing mat at 4:20 – Kent got the bonus as he was spotted as first through.

The course is now faster than it used to be. So, for those who haven’t raced St. Patrick’s for a couple of years, there is now only one sharp turn and there is also one less hill.

Mattina is notorious for recruiting fast runners; it’s a refreshing attitude that sadly many race directors have failed to adopt. While the trend in race management has been to simply get bodies to the start line, Mattina knows that if you treat people well, they will show up, but it is the elite and sub-elite and age-group competitive runners that lead the field to the start line. If fast runners respect an event, so will the not so fast – everyone wants to run well within themselves.

Mark Bomba, coach of the Langley Mustangs Endurance Group appreciates the race. He will be sending several athletes to the event that takes place in Stanley Park.

“We are really just getting going but Caleb de Jong will run, he is in 14-something shape,” said Bomba.

“Nathan Wadhwani is coming back from injury. We might have Nick Colyn, as he should be done school. Obviously, the core women will be there: Sarah Inglis, Lindsay Carson, Alycia Butterworth, Ally Ginther, and Regan Yee.”

Yee has already set two new bests in 2020, during her indoor track season. She ran the Millrose Games 3,000m in 8:57.84 and at the Dempsey Indoors in Seattle, she ran the 5,000m in 15:33.17. Both performances speak to potentially even faster times on the roads and outdoor tracks this spring and summer – it’s an Olympic year and both athletes want to be in the best shape of their lives.

That may sound like pressure, but Bomba doesn’t think so. “It’s a fun race. Come for the run, stay for the beer,” he added.

None of these trained athletes will be caught by zombies during the pending apocalypse, but they will have to race well to stay ahead of the deep field that is expected to show up on Saturday, March 14.