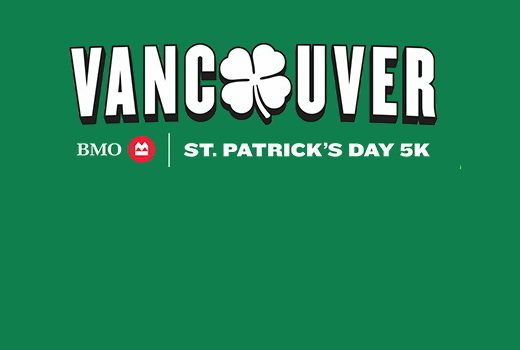 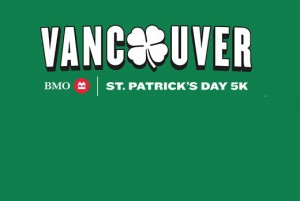 Looking for a fast 5K road race that treats runners at the front of the pack as well as those at the back in a first class manner? The BMO Vancouver St. Patrick’s Day 5K takes place Saturday, March 14, 2015 in Stanley Park. It is one of the best organised road races in BC and their post-race party is a gas. The course is fast, very scenic and traffic-free. The organizers set the standard for how a road race should be run.

Course records are: 16:15 by Rachel Cliff and 14:24 by Geoff Martinson both accomplished during their 2014 St. Patrick’s Day 5K performances. Should you wish to try to better those records, record-setting prize money for 2015 is $1406.00 for the men’s record and $1548.00 for the women’s record – matching the dollar amounts to the Canadian soil record times set by Canada’s own Malindi Elmore and Kenya’s Wesley Korir.

Before the 2014 event, Geoff Martinson and partner Brittany Therrien hopped onto a seaplane in downtown Victoria, courtesy of the race organizers. After a scenic 20-minute flight that offered vistas of coastal mountains and the gulf islands, they landed in downtown Vancouver’s Burrard Inlet. Then they found themselves in the back seat of a 2014 Maserati Ghibli Q4; a rocket emitting a throaty purr from under the bonnet. The two were chauffeured to the St. Patrick’s Day 5k start line in style. A little Hollywood; but they emerged from the Ghibli in front of 1,800 fellow runners, ready for their final pre-race rituals. Martinson, in his win performed much like the Ghibli. He was fresh off a course record win at another 5k road race six days before.

“The St. Patrick’s Day 5K is one of the rare road races that prioritizes a fun race atmosphere for the nearly 1800 participants who attend the race, they do this without neglecting the elite athletes — I’ve never been treated so well at a road race. The race directors, Steve and Karen, do an amazing job putting on the event, and not surprisingly the race has been consistently sold out and boasted an impressive elite field year after year,” said Martinson.

The after party offers green beer, good music and a post-race awards event that is fun, so much so that partiers are packed shoulder-to-shoulder, dancing and watching the awards presentation in the Stanley Park Pavilion. The 2014 edition was hosted by Clifton Cunningham, race director for west coast editions of the Canada Run Series, including the Scotiabank Vancouver Half Marathon in June and the Eastside 10K in September.

Erin Burrett of Nanaimo said, “Steve and Karen definitely go that extra step to ensure the St. Patrick’s 5K has the most competitive and deepest fields possible. By supporting so many athletes, they create not only an event to run a fast race but a fun environment in which to do it. Having run the event the last three years, I always look forward to seeing the field they put together each year!”

Martinson, who has been a competitive athlete in both the CIS for the University of Victoria, as well as a 2011 IAAF World Track and Field Championships competitor added, “ I can say comfortably that the St. Patrick’s Day 5k is one of my favourite running events — whether road, track, or cross country — that I’ve ever done.”

There is prize money for the top-three finishers both male and female, prize money goes $300, $200 and $100 for male and female, as well as Granville Island Growlers and Gift Certificates and Verismo Coffee Makers from Starbucks, deeper into the field. There is a grand prize draw for all participants, which is a two night stay in the south Okanagan at the Tinhorn Creek Estate Winery.