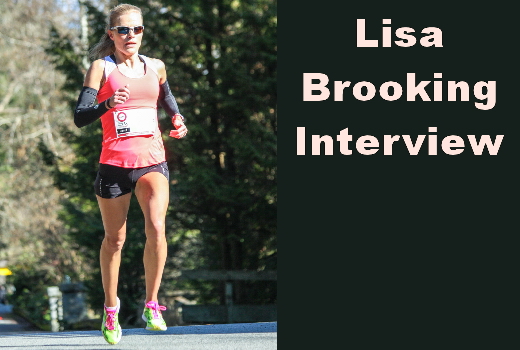 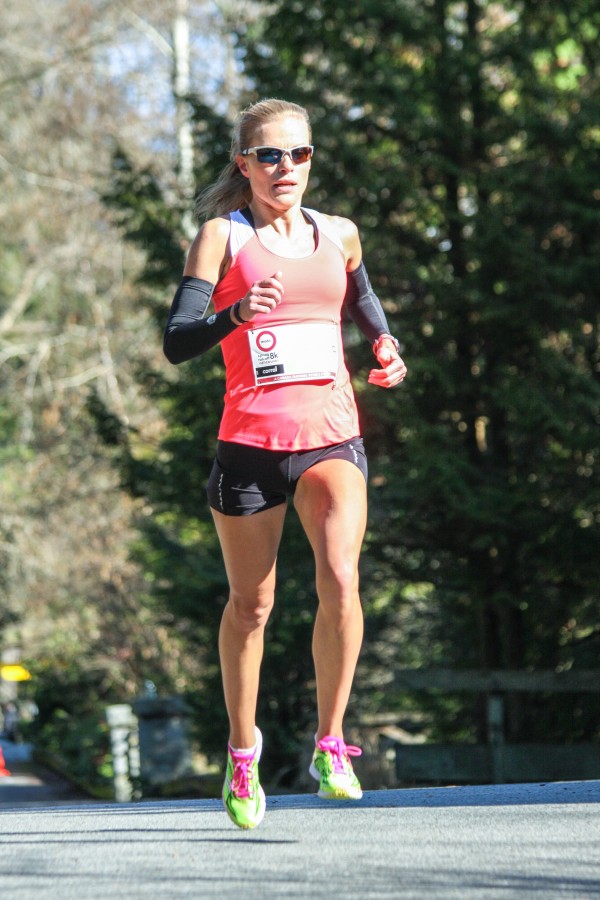 Lisa Brooking of Vancouver, BC is a distance runner, Nurse and former Canadian Interuniversity Sport (CIS) competitor for the University of Windsor Lancers. She will be competing in this weekend’s (April 6) BMO Sunshine Coast April Fool’s Half Marathon and Relay in Gibsons, BC. She is ranked as one of the faster athletes, along with hometown runner Kim Doerksen, ultra-runner Ellie Greenwood and Anne-Marie Madden. This will be a close race between the four.

Christopher Kelsall and Teresa Nightingale recently interviewed Brooking specifically for the race. Nightingale is the long-time co-Race Director with her husband Larry Nightingale. This is the 37th running of the event.

AI: We know you are busy, so tell us what has happened in your running life since last year’s April Fool’s Run?

AI: Tell us about your personal best.

LB: My goal at the Victoria half was to make a comeback from my personal worst at the Vancouver Scotiabank Half Marathon race, where I ran 1:26. I also wanted to achieve my long standing goal of breaking 1:20. I felt my goal was attainable considering current training though anything can happen on race day.

I remember showing up to the Victoria half in a very calm, relaxed state, feeling ready to run. I don’t remember much after the gun went off except that I was running and it felt comfortable. I didn’t know the course ahead of time though recall it being quite beautiful with many spectators throughout. The Victoria half gave off the same vibe as the April Fool’s race – a seaside city filled with quaint neighbourhoods and wonderful people supporting active individuals.

Words cannot describe my disbelief when I crossed the line as I pushed myself so hard in the last 5km wanting that sub 1:20. I had no idea I crushed it! I finished in 1:17.42 and I was in tears and I remember turning back to look at the clock after crossing the finish line. I was shocked (I really need to start running with a watch!). At that moment I felt like I achieved the impossible. That race gave me the motivation and drive to look ahead and dare to dream. This year I have some daring goals and look forward to working hard to achieve them. I am pleased to say Saucony believes in me too and has decided to sponsor me for 2014.

AI: What affected your running last year, where you ended up having that “personal worst” 1:26?

LB: I went back to school in the fall of 2012 for critical care certification then started my new and exciting job at RCH in the intensive care unit. I was determined to train hard and a successful running season while learning this new world of critical care nursing at a busy neuro- trauma centre. My season started off hopeful though it slowly got worse. I didn’t want to admit it, but I was simply run down with my new job and stressful work environment. I see now it was unrealistic of me to expect a banner season when at the heart of it my career was my focus. I have had slow half-marathon times in the past on non-certified, challenging course. The Vancouver Scotiabank was a devastating personal worst because the course is a fast certified course. I also had fond memories of this race the year prior finishing fourth women, first BC woman and with the time of 1:21.10. I knew if I was going to break the 1:20 barrier it was going to be on that course. Honestly, I feel I was so focused on the goal I was thinking about my body. I came off nightshift Saturday morning and raced Sunday. My body wasn’t properly rested nor hydrated and frankly I didn’t have the proper training under my belt to realistically achieve my goal. Ignoring all those factors I ran the race. The last half was so painful plus I was having gastrointestinal issues (which is common for me when my body turns back around from nightshifts). In summary, I took a month off following from anything more than light running. Took two weeks off work, flew home to Orillia, Ontario and spent my days on the water; wake boarding, waterskiing etc. Aug 1st was the official date where my head was back in the game and I was looking to make a comeback from my personal worst and end my season on a high note.

I am certainly proud to be a two-time defending champ and yes will run hard to defend my title.

AI: Without giving away your secrets, what can you reveal about your race strategy against the likes of Kim Doerksen, Anne-Marie Madden and Ellie Greenwood?

LB: They are strong runners and have laid down fast times at the First Half Half Marathon in February. I feel Sunday’s race is fair game for any of us to win. Kim and I are good friends and have costumes that may just fool spectators and officials alike if they aren’t careful 🙂

AI: What are your next big races this season?

AI: In regards to these half-marathons what are your time and or placement goals?

LB: My half-marathon goal for this year is to break into the 1:16 range with a daring goal of sub-1:16. My running goals are generally time-based though would love to podium finish in any of the half-marathons, named.

AI: What does a typical training week look like for you? What sort of weekly mileage and long runs do you get up to?

LB: Due to shiftwork my training schedule cannot be regimented. As well, I tend to gear my training around my body. For example, if I am feeling drained following a nightshift I would likely opt for a long, easy run versus intervals. I haven’t followed a training program since my university days though I do try to incorporate the following weekly: one track workout, two tempos, one interval session and one long run. I have been slowly increasing my long runs and am currently at 20km with a mixture of trail and road. Since the New Year I have incorporated cycling into my spring training. I currently have my road bike up on a wind-trainer. Weekly running mileage 60-70km, but I am aiming to increase to 100km by June. I tend to train on the cautious side due to past experience with stress fractures in university therefore I am increasing my running frequency and mileage slowly over this spring.

Despite my conservative approach to training, I am optimistic my goals are attainable! I surprised myself at the Goodlife Fitness Victoria Half Marathon finishing in 1:17.42, which was a four minute personal best time. However, this isn’t the first time a significant time drop has occurred. I ran as a Lancer at the University of Windsor under Coach Dennis Fairall for cross-country and track. In 2008, after a lot of work, I finally had my 3000 metre time near that 10-minute mark, but not under. Canadian Interuniversity Sport (CIS) standard in that year was 9:56 to guarantee a spot at nationals. I went onto run a 9:41, crushing standard and certainly surprising myself, I went into nationals ranked first in OUA and 3rd CIS!

AI: What are your goals for next weekend? Does being two-time defending champion give you extra confidence?

LB: This race will be my first half since my big PB in October. I’m using this race as a fitness indicator. I had to take some unexpected time off in December and early January (due to eye surgery) so I am not as fit as hoped at this point however, I feel a sub-1:20 is reasonable. But who knows my body may surprise me with another speedy time!

Both years I have had wonderful experiences before, during, and after the race. I am looking forward to staying at The Shore B&B. You couldn’t ask for better hospitality or homemade breakfast! I think knowing the race course has its benefits. There are lots of rolling hills. The post-race venue accommodates the race crowd perfectly but it’s the food that is the real show stopper. There is always something outstanding and hot like soup or stew or chilli; perfect food for an early April race on the Coast.