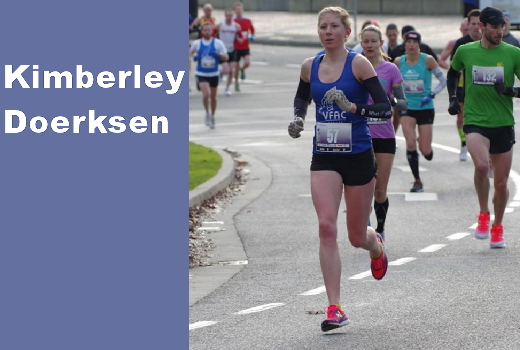 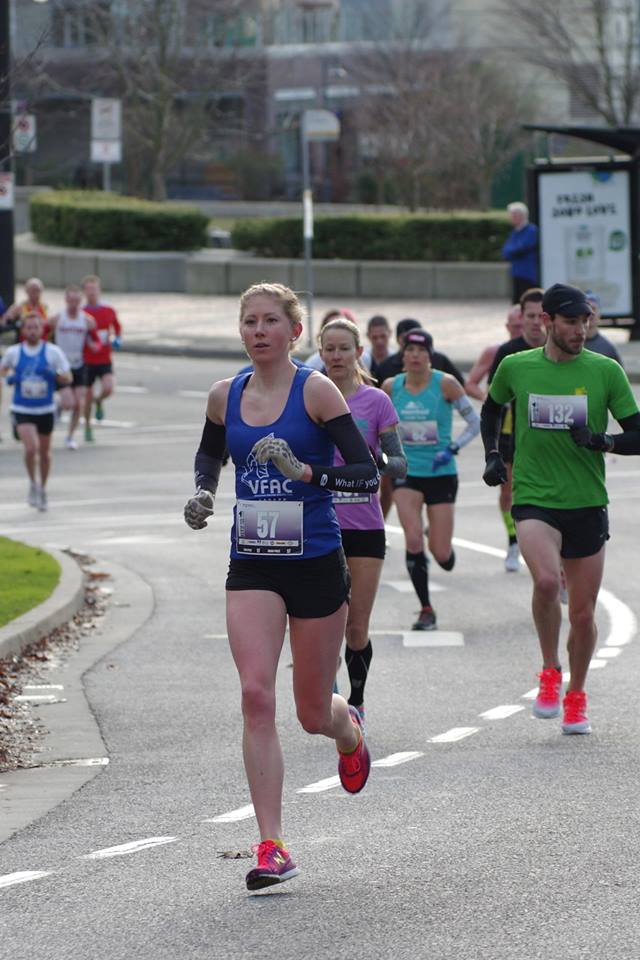 Kimberley Doerksen of Gibsons, BC will be competing in the 2014 BMO Sunshine Coast April Fool’s Run Half Marathon on April 6th from her hometown. The race provides a rolling, point-to-point course with a net downhill of over 140m. The race ends in the next town of Sechelt, BC, which is conveniently located 21.1 kilometres to the north; up the Sunshine Coast Highway.

Doerksen has recently established herself as a strong, up-and-coming distance runner, after having to battle iron deficiency for years; a condition she wasn’t aware that she had. Once diagnosed and treatment administered to the point where her iron stores were near normal; her potential began to show. Recently she has finished near the top of the field in three back-to-back-to-back races, which were the Synergy Health Bazan Bay 5k where she finished second in 16:49, BMO St. Patrick’s Day 5k in a very strong field, on a rolling course. She finished that race in 17:05 for fifth position and finally the Modo Spring Run-Off 8k, where she again finished fifth in the time of 28:02.

Teresa Nightingale interviewed Doerksen specifically for the race. Nightingale is the long-time Co-Race Director with her husband Larry Nightingale. This is the 37th running of the event.

Teresa Nightingale: You had a big breakthrough last year. I understand you were anaemic, when exactly did you find out and how long do you think you had low iron before that?

Kim Doerksen: Thanks. I found out I was anemic right after the BMO Vancouver Half Marathon (May 18th 2013 to be exact…). I had been having issues at practice and the race confirmed that something clearly wasn’t right. I went to the doctor thinking maybe it was exercise induced asthma, but when the blood work results came back both my iron and hemoglobin (the oxygen carrying protein in the blood) were both so low the doctor didn’t understand how I was getting off the couch, let alone racing and training. I began to take supplements right away and made a conscious effort to eat more meat (I wasn’t vegetarian but had vegetarian tendencies for meals, which didn’t help).

TN: When did you notice improvements?

KD: I began to feel better within a couple weeks – nothing huge, but enough that I wasn’t struggling during warm-up anymore. It took time, and I think the Summerfast race in July (about three months later) was when I knew I was noticing that I was getting closer and closer to 100%. My levels still aren’t where my doctor wants them to be, but they’re a hell of a lot better than they were! I’m not sure how long I was dealing with the low iron, but I know that my running performance never seemed to improve since after the Boston Marathon 2012.

TN: IT seems like this was happening around the time you joined with the Vancouver Falcons Athletics Club. Whose idea was it to join VFAC?

KD: I had just started training with VFAC when I found out about the anemia. I had run the Vancouver Sun Run (10k) and after a dismal performance (in my mind anyways), I wanted to shake things up a bit as I had been training on my own for about six months and wasn’t seeing any improvements (little did I know it was due to iron). So I decided to seek out a club that focused on distance running. I had been to many races in the Lower Mainland (Greater Vancouver) and always recall some of the fastest female times coming from girls wearing the royal blue VFAC singlets. I figured if I could train with the likes of Catherine Watkins, Helen Ritchie and Kristin Smart I could start to run at the levels they did. I chose the club mainly from seeing their performances at races, Google helped, and talking to my parents about it solidified my decision of what I wanted to do.

TN: Was Summerfast 10k your first hint at how much faster you could run? How much of a surprise was that 35:22?

KD: Summerfast was huge for me. Going into the race all I could think of was “I need to break my road race curse of the 40 minute mark” (my previous PB was a 40:09 from 2009). Workouts had been going well and I was feeling strong, but had no idea what I was actually capable of come race day. I was itching to race and my coach John Hill told me to be patient and “debut” at Summerfast. When I was given my starting pace with our race plan I balked. I just stared at my sheet and thought “this is impossible”. But, as per usual, John was spot on and came in right around what he predicted. I was so excited!!

TN: What half marathons have you done as your “faster self”? and what times?

KD: I’ve done three more so far: the Kelowna Wine Country Half Marathon had its inaugural race last September, so that was my first half back (I surprised myself, and many others I think) in a time of 1:18:04. Next was the Victoria Half, which I finished in 1:17:27, and then most recently was the First Half in Vancouver in 1:17:26.

KD: I can’t give all of my secrets for the race away. This year I would love to run a PB on my hometown course, but with that damn hill up Marlene and Ratportage it’ll be a tough go. It would be fabulous to get the course record, and if that is paired with a new PB I’ll be on top of the world!