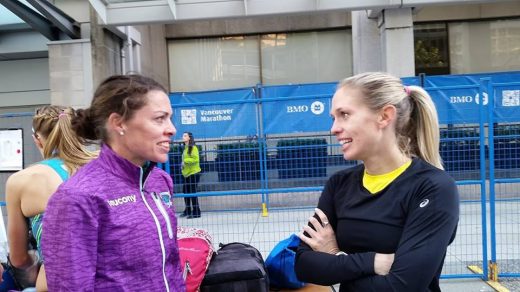 The Westcoast’s spring trifecta of big road races finished up on Sunday with the BMO Vancouver Marathon. The weekend event also includes the half-marathon and 5-mile (8.045K) distances.

Daniel Kipkoech won the marathon race in the time of 2:19:09. He won by over seven minutes as the second place finisher, George Towett from Newport, KY finished in 2:26:57. Eldoret, Kenya athlete Jonathan Kipchirchir Chesoo crossed the line in third position, stopping the clock at 2:32:08.

After winning the TC10K in Victoria the prior week (29:57) Kipkoech told Athletics Illustrated, “I would like to run 2:19 in Vancouver. I think I am ready for that time, depending on the weather.”

The weather delivered as did Kipkoech.

The top master was North Vancouver’s Craig McMillan, who finished sixth overall in the time of 2:34:44.

The top three women in the race were Kenyan Gladys Jepkechei Tarus. She finished in 2:39:38 just holding off Austin, TX runner Allison Macsas, by four seconds. The two didn’t finish far in front of first master, Markham, Ontario’s Lioudmila Kortchaguina, who crossed the line in the time of 2:41:24

The men’s half-marathon was won by Lethbridge, Alberta’s Kip Kangogo who won in the time of 1:06:08. Kangogo, two weeks prior, raced the Vancouver Sun Run. Before the race he said, “I want to see if these 38-year-old legs can still go.”

They did; however, he was up against a deep field that included 11-time US Mountain and road running champion Joseph Gray of Colorado Springs, CO. Gray won that race in the time of 29:38. Vancouver’s Geoff Martinson finished second in 29:44 and third was Kipkoech credited with 29:54. Kangogo finished the Sun Run in 30:27 and in sixth place. It was a good showing, but his BMO half-marathon performance was better.

He finished ahead of Kenyans Paul Kimugul, Willy Kimosop and Solomon Rotich, finishing 46 seconds in front of Kimugul.

“The race was well organised and also the weather was so nice compared to last year,” Shared Rotich. “I was good until 7K where I had stomach issues. And I decided to drop from the leading group of three athletes, for me to adjust my pace so I could finish the race. It was good enough I did manage to maintain my position all the way to the finish.”

Rotich is suffering from gastrointestinal issues which he is taking medication for. “I am so glad I did it, before I came to Canada, I had this stomach problem that was diagnosed as amoeba.  So am still under medication, otherwise I felt good.”

Andrew Connick from Waterford, Ireland finished fifth in 1:09:23, one second ahead of Cold Lake, AB’s Matt Setlack, who crossed the line with a two-minute personal best.

“It felt great,” shared Setlack. “It was almost like a Sunday long run. I’m super pumped with it. I had a couple guys to run with, which made it very enjoyable.”

Wife Emily Setlack, who was coming off of a second-place finish in the TC10K in Victoria the previous weekend (a race she really wanted to win), finished second again. Vancouver’s Natasha Wodak, in her return from foot surgery, continues to display renewed fitness after finishing well back of the lead two weeks before in the Sun Run, finishing fifth. Sunday, she won in the time of 1:12:58, she was 11th overall. She owns a best of 1:11:20 from New York in 2015. Setlack finished in 1:13:28

“I’m ecstatic,” shared Setlack. “Jane (Murage) and I ran together for the first few kilometres and Natasha (Wodak) caught me in Stanley Park and charged ahead for the final 6K. She was flying! That was a huge PB for me at around two minutes faster and I felt awesome.”

Murage finished third in 1:15:31, while two Vancouver runners came in for fourth and fifth, it was Lisa Brooking edging Sabrina Wilkie, finishing in 1:16:15 and 1:16:20 respectively.

The 8K race was won by Nanaimo’s Robert Brunelle in 29:04, defeating Victoria’s Chris Callendar with his time of 29:13. Abbotsford’s Russ Esau finished in third place stopping the clock at 29:34. He was also the first master.

The top three women were Courtney McEwan credited with the time of 33:03; she was followed in by Phillippa Keast five seconds back at 33:08 and third was Kim Collier of Calgary, crossing the line in the time of 33:58. The top master was Susan Gordon, who competes in the 55-59 category. She finished in the time of 33:54.

The three big west coast races are the Vancouver Sun Run with approximately 40,000 finishers, followed by the TC10K in Victoria BC, with just under 7,000 finishers and finally the BMO Vancouver Marathon, run back-to-back-to-back each year.