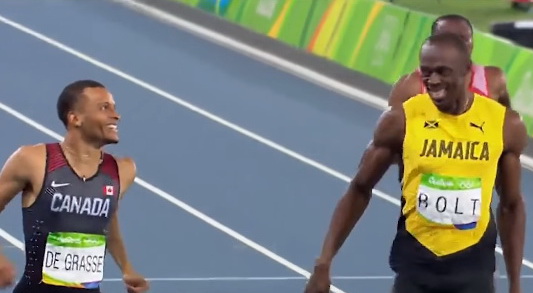 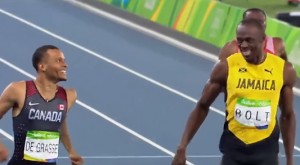 Today, Usain Saint Leo Bolt of Trelawny Parish, Jamaica undoubtedly elevated his stature to the annals reserved for only the greatest sportspersons of all-time.

Oh how the sport of athletics is going to miss him.

Today, sure, Andre De Grasse of Toronto reinforced his arrival as the next one, by earning the silver medal in the 200-metre final, to add to his 100-metre bronze, but the day was Bolt’s, to be sure; he went out with a flash.

Bolt became the first person to win, back-to-back-to-back gold medals in both the 100-metre and 200-metre Olympic events.

Bolt, if he had not already done so (he had, trust me), cemented his stature in the sport of athletics as the greatest sprinter male or female of all time.  Although De Grasse has indeed arrived on the scene, it was Bolt who flexed his star power.

Maracana Stadium has been left nearly empty for many athletics events; it is sadly a flagging sport. Today, it appeared to have the best attendance since the opening ceremonies; the building may have been about 85-90% full.

Bolt isn’t hanging up the golden Pumas just yet though. There remain at least three more superhero duties to take care of: help Team Jamaica win the 4 x 100-metre relay during the Rio Games, which is highly likely to happen, but not guaranteed. He also promised to race the 2017 IAAF World Track and Field Championships that will be taking place in London next summer and maybe, just maybe, tease us all with Diamond League meets where he may let loose and run the fastest he has since his magical days in 2009 when he blazed a 9.58 in Berlin. He will not approach 9.58 again, but he sure looks capable of running sub-9.75, a benchmark only three other men in history have crested.

That 9.58 performance was so off the hook, so jaw-dropping; his fame instantly skyrocketed like few others in sport history. Perhaps it was a greater performance than Wilt Chamberlain’s 100-point game; certainly Wayne Gretzky breaking the 200-point barrier for an NHL season comes to mind as comparable. Little else comes close. Tiger Woods’s first decade in the PGA perhaps?

Although Rio is Bolt’s Olympic swan song, the world championships include the same athletes in just as competitive of a meet, but played out on a smaller stage.

Bolt has been just as successful during the world championships. So far, he has won four gold medals in the 200-metre event as well as three golds in the 100-metres. He would have won the fourth 100-metre world’s gold, but he was disqualified, a victim of the ridiculous false start rule that must be changed, TV be damned.

Bolt’s star power could be witnessed after both of his gold medal  wins in Rio, where the fans stood to cheer him as he dawdled around the track posing for selfies, wearing the Jamaican flag as well as someone’s blanket, which was randomly placed over his shoulders, hugging athletes, posing his lightning Bolt pose for the media.

He is one with his people. A marketer’s dream come true; he is outwardly apolitical and carries no defects. He is beloved by Americans, Asians, Brazilians, Europeans and especially his fellow Jamaicans.

The 60-million dollar man will share a historical place in our collective hearts right there with a small handful of legends such as football’s Pele, the brilliant mastermind from Brazil, who sadly was not in condition to light the Olympic cauldron during these opening ceremonies.

Bolt will exist as a legend in our consciousness along with the greatest, Muhamad Ali, who is no longer with us. Long suffering from Parkinson’s disease and the complications that come with it, the great Ali was relieved of his wretched and tired body this spring.  In 1996 Ali lit the Olympic cauldron in Atlanta, the disease made him shake as he lit the flame, his people cheered him and many wept.

As Ali is no longer with us and Pele is fading, perhaps the proverbial torch has been metaphorically passed to Bolt.

Perhaps another proverbial torch has been passed from Bolt to De Grasse, the “next one”. De Grasse could not have aligned himself with a more appropriate mentor than he did with Bolt, as displayed during their semi-final 200-metre finish: De Grasse smiling apropos at Bolt with his giant, child-like grin, as they finished 1-2, “follow me son, I will show you the way.”

De Grasse has arrived right on time as an athlete and perhaps as an ambassador for a sport that needs a winner both on and off the track, now more than ever.