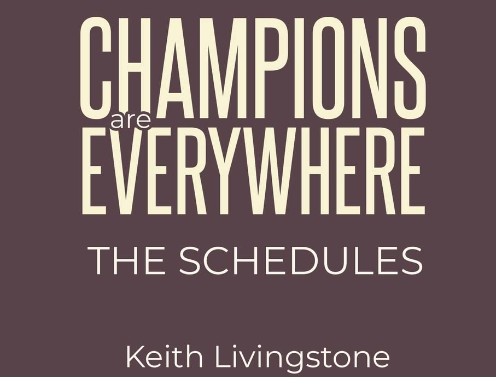 Title: Champions are Everywhere: The Schedules

“Champions are everywhere, you just have to train them properly.”

Author Keith Livingstone grew up in Auckland, New Zealand, a stone’s throw from the athletics mastermind Arthur Lydiard. He ran in the shadows, legacy, and footsteps of the great Lydiard athletes who put the small country on the athletics map. Lydiard’s athletes did this during the late 1950s and early 1960s and then again throughout the 1970s. The nation continues to produce competitive athletes today. But when Lydiard was directly coaching and then trained coaches, the Kiwis flew.

During Lydiard’s time, he wrote with co-author Garth Gilmour, several books including Run the Lydiard Way and Run to the Top among others. They were written in a practical local language of the times. Many of the Lydiard athletes have written training books themselves, or autobiographies including Peter Snell, Lorraine Moller, Vern Walker, and others.

Livingstone wrote Healthy Intelligent Training, which became a best-seller, and was adopted as a text of the Lydiard Foundation. The Lydiard Foundation is run by Moller, who carries on the Lydiard tradition of teaching would-be coaches how to apply the method. The method or the foundational parts of the method are seen in the programs of every successful coach and his or her’s schedules throughout the world — this continues today.

So, why publish another book, and why, reader, must you digest Champions are Everywhere: The Schedules? For one, HIT is a definitive text and Lydiard did not like to publish schedules (the publishers made him) because Lydiard feared that people would just blindly follow them.

Livingstone makes it clear not to follow schedules blindly. He also doesn’t just write about schedules here. Champions are Everywhere re-hashes physiology in a digestible way so that when you do consider a schedule, you are not just throwing a weekly training plan at the wall to see what will stick. There is a method to the madness for which the base principles remain intact.

Livingstone enters into a realm that many coaching books don’t bother to discuss: avoiding premature peaking. This is more important than just about any part of training for athletes who just randomly run quality sessions two or three times per week, nearly 52 weeks per year. They may run great races from time to time as well as terrible races, mediocre races, and get injured often — all very randomly.

The Lydiard program takes the athlete from base phase to hill phase to anaerobic phase consolidation, and then into the taper with some peaking workouts. It sounds simple and can be, however, as self-taught Olympic marathon runner Ron Daws once said, “good and bad training can look the same on paper.”

Livingstone uses only real-life examples of what to do, including having Arch Jelley, coach of the legendary John Walker, stop doing all quality sessions after running a lifetime personal best. Jelley put Walker back onto a 160-kilometre per week schedule for two weeks with no quality, then planned a re-peak. It worked, Walker then ran a 1500m world record. He peaked right on time.

Champions are Everywhere is choc-a-block full of examples that actually happened. This helps to illustrate each portion of the training program, whether the athlete is a middle-distance runner, long distance, or training to race the marathon event. Basic physiological principles apply to the 60-minute 10K runner just as they do to the 27-minute 10K runner.

The schedules illustrated are not just Lydiard’s or Livingstone’s or Jelley’s. Jack Daniel’s VDOT tables are explained, and the science of V02max stimulus is shared as is the effects of strength training for a distance runner. Peter Coe, Sebastian Coe’s father was an advocate of resistance training as was the great Percy Cerruty. Livingstone discusses British coach Wilf Paish and his resistance training method on Peter Elliott, one of the all-time great 800m runners (1:42.97).

Here, you may learn about mitochondria, muscle fibre types, enzymes, and acidic versus alkali blood PH, without having to go to the science well.

Champions are Everywhere is written very much in the voice of the author. Read HIT, then read Champions are Everywhere, and you will get to know what it is like to speak with Livingstone. He’s clear, concise, and specific. The illustration are — as they were in HIT — created by twin brother Colin who lives in Wales, while Keith has been a practicing chiropractor in Australia.

It’s handy reading for any coach who fancies themselves thoughtful, practical, knowledgable and carring, in regards to the outcome of the athlete’s training, that they are likely playing for.

We noticed you're visiting from France. We've updated our prices to Euro for your shopping convenience. Use Canadian dollar instead. Dismiss