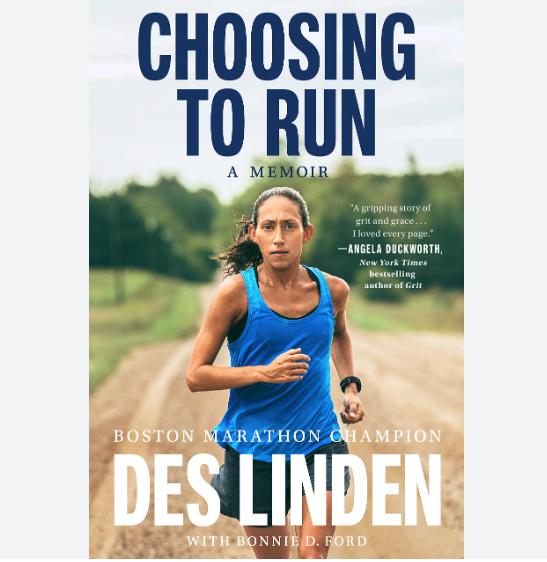 Title: Choosing to Run (a memoir)

Michelle Robinson Obama wrote the memoir, “Becoming,” and it is admirable work. Who does not love the former first lady and her appreciation of her own mother’s brilliant and kind of unflappable Zen neutrality…

Anthony Bourdain spoke to all through his autobiography Kitchen Confidential — we miss him.

“No one understands and appreciates the American Dream of hard work leading to material rewards better than a non-American.” — Bourdain.

George Orwell wrote, Down and Out in Paris and London in 1933 and truer words have not been uttered since “it is curious how people take it for granted that they have a right to preach at you and pray over you as soon as your income falls below a certain level.”

Those who have turned the pages of these autobiographies are better off for having done so.

Amongst these and other greats is Choosing to Run by Des Linden and Bonnie D. Ford. It is one of the all-time finest memoirs.

Choosing to Run is quite possibly the most entertaining sports memoir, full stop.

Linden’s Choosing to Run invites the reader inside the unique world of professional running — a close-knit global community — and in so doing bares her voice in its truest form. The reader can hear Des on the pages, the American kid from Southern California, as she blossoms into a world-class marathon runner.

Along the way, there are barriers, obstacles, and 10,000 hours of good practice toward the most excellent race.

One may be able to fake their own death more easily than faking a marathon. The distance and required effort, and the clock conspire to be the ultimate arbiter.

She was raised by an overbearing, competitive father, and a mother who, with the best intentions, was complicit. Although Linden is a superseder, her father’s competitive spirit remains within her — it had to.

Life threw Linden obstacles, but the greatest antagonist of all was hypothyroidism which nearly killed her. It was ugly and it was close.

She survived, in fact, she thrived in unexpected circumstances. It has been mentioned that she is competitive, yes?

Linden does not take guff from anyone but is tactical when appropriate.

For example, she tells the reader how she feels about doping and those who associate with dopers. She writes openly about so-called shoe doping and how all that she came to understand in the sport, is now apparently meaningless. Linden writes about the effects of doping and the use of super shoes with honesty and integrity and provides a practical perspective on the two that simply speak common sense — World Athletics, take note.

She is bold and was willing to risk her job (as a professional runner) when she answered a controversial question that she knew was coming during a press conference. She said it anyway. Linden pulls few punches.

Some of her relationships will make fellow athletes envious. Her agent Josh Cox, running friends like Reid Buchanan or Kate Gustafson, her sister, and a few race organizers.

Honesty wins in Choosing to Run on multiple levels. She also shares her perspective of her cohorts Shalane Flanagan, Kara Goucher, and Dathan Ritzenhein among others. This leads to another antagonist the Alberto Salazar-Nike Oregon Project (NOP) and the fallout from the alleged doping practices.

Choosing to Run is gripping, entertaining, and frank yet presented humbly and is one of the best sports memoirs of all time — it’s a must-read.

What others are saying…

“Revealing…Athletes of all ranks will find Linden’s memoir heartwarming and inspiring.” —Kirkus

“This is a gripping story of grit and grace. With unusual honesty and rare insight, Des Linden shares her journey, showing us that a true champion is defined not by whether she wins the race but by how she runs it. I loved every page, and the morning I finished, I laced up my sneakers and went out the door inspired to do my best!” —Angela Duckworth, New York Times bestselling author of Grit: The Power of Passion and Perseverance

“Des boldly pulls no punches in this behind-the-curtain account of her life as an elite distance runner.  If you’ve ever watched a marathon and wondered what was going on in the mind of that person who just blew by at 5:15 pace, here’s your chance.” —Ben Gibbard, ultra-marathoner and lead singer and guitarist of Death Cab for Cutie “The most entertaining sports book I’ve ever read, Choosing to Run will have you do just as the title says … Unless, of course, you grab a coffee or bourbon as you read one more chapter.” —Deena Kastor, New York Times bestselling author of Let Your Mind Run: A Memoir of Thinking My Way to Victory