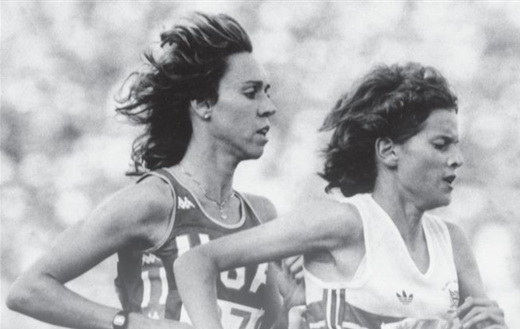 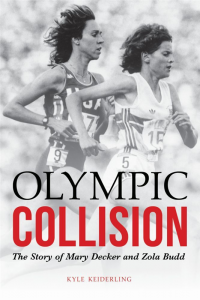 The story of the collision that took place between the barefoot teenage phenom of South Africa, Zola Budd and American track star Mary Decker, is as infamous as any sporting drama. Played out in front of millions, if not billions, it was the trip seen around the world, but few people today who are under the age of 50 likely know the fine details that lead up to the crash or the continuation of the drama afterwards.

The general story is as well-known as the Zenadine Zedane’s head-butt to the chest of the Italian trash-talker Marco Materazzi during the 2006 FIFA World Cup in Germany or of Mike Tyson biting the ears of opponent Evander Holyfield during their heavyweight bout or the high drama of Tonya Harding and the figure skating scandal, where she organized an attack on her primary American competitor Nancy Kerrigan. Kerrigan was smacked on the leg by Shane Stant with a baton in an attempt to break it.

The collision is the stuff of legend.

Author Kyle Keiderling, in his book titled Olympic Collision: The Story of Mary Decker and Zola Budd, brings to life the narrative of antagonist Decker and protagonist or perhaps damsel in distress Budd; she nearly fits both roles.

As much as you may think that you know the story, it is likely that you don’t know near as much as Keiderling had found out during his extensive research of the subject. And it is within those details, where the drama decidedly comes alive in the pages of his book.

Keiderling traverses chronologically from childhood-on in alternating chapters between Budd growing up in rural South Africa, running free on a farm and Decker as she grew up in small town New Jersey, then later Southern California; the two could not be more disparate characters. The characterization process may be overdone, but the reader will be clear on who is who in short order.

Budd, as we find out was a shy child who didn’t seek out attention and very much enjoyed running for the very basic joys that it brought her via her older sister, who would, in all practical sense, replace her own mother; she served as a confidant and the only person that Budd felt she could trust.

Like classic stories there is the protagonist Budd, and antagonist Decker portrayed in a good versus evil motif. In fact, there are several antagonists throughout the story including Budd’s father as well as the British and American protestors, the media and tens of thousands of spectators who witnessed the collision.

Keiderling avoids directly referring to Decker as a needy and all-consuming self-righteous bitch, but while he avoids the phrase, he implies it in a treatment that is akin to Michelangelo painting the Sistine chapel with a firehose. Her bitch-persona in Olympic Collision is so ever-present that it becomes, like Ringo’s drumming, integral to the composition. According to the author, her arrogance sees no limitation; Decker, in this story is unmistakeably the bad guy.

Her competitiveness would see her career derailed by so many injuries it would seem she was on a collision within herself. She rampaged through relationships, coaches, injuries and conflict with the media.

The story is a highly entertaining page-turner and a must read – even for non-track fans, however, if there is a weak link to the structure, it may be found in Keiderling’s seemingly near personal distaste for Decker. Keiderling does point out in the acknowledgements that Decker refused to communicate with him. It can be assumed that she could have saved herself all sorts of page-turning trouble by reaching out.

Budd, on the other hand seemed to be accessible, honest and straight-forward during her communications with the author. For someone who is introverted, shy and timid, she can deliver an interview in a professional manner, keeping eye contact and sticking to her story. Budd was thrown into the media spotlight against her will at an early age and developed a quiet professionalism. She has had to, as she was thrown into the belly of the beast, full throttle with little let-up until she nearly lost everything, even her running. It makes for compelling story telling.

Olympic Collision is a recommended read.