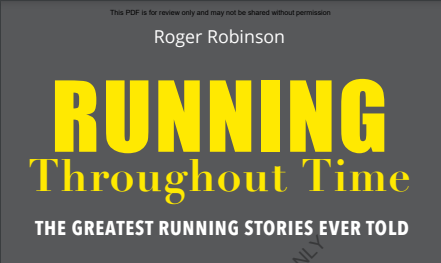 Title: Running Throughout Time: The Greatest Running Stories Ever Told

Is there a more elegant voice in the sport of athletics than the graceful Roger Robinson? The correct answer is no. And that fact is no more apparent than in the author’s latest release Running Throughout Time: The Greatest Running Stories Ever Told.

From Atalanta — the heroine runner of ancient Greece ― to the likes of Allison Roe, Billy Mills, and Joan Benoit Samuelson, this book brilliantly brings history to the fore.

This book creates an uncharted dynamic for the greatest runners in history as the pages come to life.

Robinson is up to his classy standard. This is of his better work, where he creates drama utilizing his signature narrative detail; understood best by the man who has been involved with the sport in the broadest and most varied ways. As a lifelong runner, he has competed at the elite level. He continues to compete well in his senior age group. Robinson has been in broadcast media, coaching, storytelling, is a scholar and journalist, and is a sought-after speaker. He knows the sport.

These stories offer new ventures. Readers will find out about the origins of the marathon through the story of Pheidippides and the Battle of Marathon. The first modern-day footrace from 1719 to recent history. Robinson writes about the origins of cross-country running, road racing, and pedestrianism.

Robinson also tells of recent history in new detail. For example, the stories of his wife Kathrine Switzer who famously registered and raced the Boston Marathon when women were not permitted to. He writes of Allison Roe of New Zealand. She won Boston too when it was accepted. And of course the long tenure of Join Benoit Samuelson whose flame burns embers in the hearts of American sports fans. Her name transcends athletics.

Robinson has lived the homework as a fan, athlete, media personality, and author. Running Throughout Time is a must-read for all running fans and those just interested in masterful storytelling and narrative.

Roger Robinson is a vivid storyteller and a lifelong elite runner who knows the sport deeply and passionately, yet he is also a meticulous scholar who digs and digs until he gets the story right. He shares his findings here, such as those from his investigation of the tragedy during the 1928 Olympics when most of the women running the 800 meters collapsed in distress.

Roger has been everywhere in running: elite runner, masters champion, stadium announcer, TV commentator, researcher, and journalist. The stories in this book are selected because each is significant in the greater story of running and because Roger can bring something new and exciting to their telling.

From variant translations of ancient poems, dusty stacks of old newspapers, crackly handwritten notebooks, and carefully studied film footage, Roger has done every kind of homework to get these unforgettable stories right.