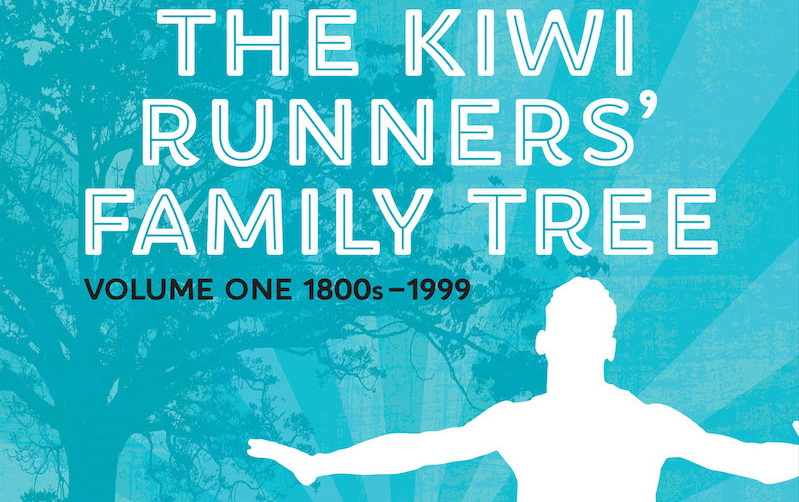 For example, Sir Edmund Hillary influenced generations. In 1953 he became the first confirmed person to reach the summit of Mt. Everest along with Sherpa Tenzing Norgay. Arthur Lydiard ran, coached, and inspired many on the athletics front. And of course, the New Zealand All Blacks carry global notoriety for their tremendous rugby successes.

The cover of this coffee-table-style paperback, designed by Murray Dewhurst, includes a reverse silhouette of Peter Snell, multiple world record holder, and Olympic gold medallist—he too has inspired many athletes.

Hillary, Lydiard and Snell continue to inspire adventurers and athletes to this day.

Snell and the legends that followed

The Kiwi Runners’ Family Tree is not the first book that Snell has graced the cover of. Vern Walker, a strong runner in his own right, published the book titled: Peter Snell and the Kiwis Who Flew, its title borrows from the book named Kiwis Can Fly by Ian Agnew about legends John Walker and Rod Dixon. Vern Walker admitted that he only named the book so to sell copies. Although there is plenty about Snell lore between the covers, it was a savvy move. Snell of course graces the cover of his autobiography co-penned with long-time Lydiard co-writer Garth Gilmour.

As the title suggests, The Kiwi Runners’ Family Tree covers New Zealand athletics history dating back to the early 1800s, before cross-country and pedestrianism took the world (primarily the Commonwealth, France and the US) by storm during the early-to-mid 1800s. Being “Volume One,” tells us that there will be a follow-up highlighting the 2000s and perhaps beyond. So, while the pages are choc-a-block full of Kiwi running history you won’t see the impressive Nick Willis, Zane and Jake Robertson, Quentin Rew, Kim Smith or Michelle Seymour in the pages.

The Kiwi Runner’s Family Tree starts off with a foreword by the legendary coach Arch Jelley. We find out that perhaps the reason why New Zealand may churn out a high volume of great athletes might be found within Jelley’s first sentence, “When I was young, we walked or ran just about everywhere.” Does that sound familiar? It should. He goes on to say, “….in much the same way as the young Kenyans do.”

And if you ask John Walker, Lorraine Moller, Rod Dixon and dozens of others, you will find that they too walked or ran just about everywhere—there is a lesson to be learned here.

The book follows a format

The format for each feature on each family member is not unlike an expanded sports playing card. At the top of each bio is indicated a few primary accomplishments listed with names, athlete image and titles. The sections of the book are divided by discipline in categories: sprinters, middle-distance runners, long-distance runners, marathon runners, hurdlers and steeplechasers, racewalkers, para-athletes, mountain runners and finally ultra-distance and adventure runners.

For runners from anywhere in the world—not just New Zealand—the New Zealand history in athletics within these pages should be mandatory reading.

One dollar from the sale of each copy of the book goes to Paralympics New Zealand.

In the epilogue, Sobanja writes, “Running seems to be woven into New Zealand’s DNA and it has played an important role in establishing this small, but formidable sporting nation.”

It has and although the population is small, the family is extensive and continues to grow through the inspiration of the legends listed in this book and living active lifestyles.