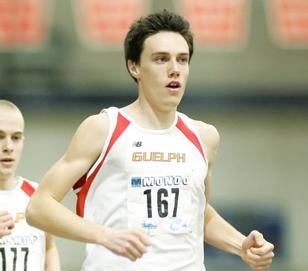 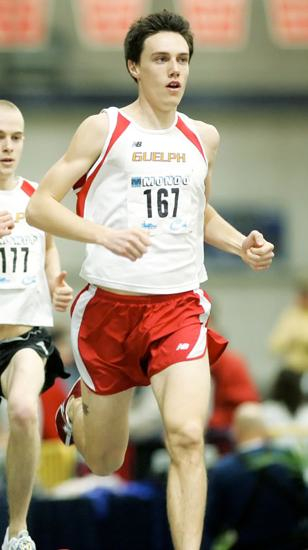 Christopher Kelsall: How cool is it to be from Guelph, Ontario and dominate the Canadian Inter-university Sport (CIS) Cross Country Championships for the University of Guelph Gryphons, while having the event hosted not too far away in Sherbrooke, QC? Did you have a lot of family and friends out?

Kyle Boorsma: It means a lot to me to represent not only my university but also my city when I compete. I push myself in races for my teammates because through training with them everyday I know how bad they want to win. But also, I run for my friends, family and the city because I know they want to see me succeed. Guelph hosted OUAs (Ontario University Athletics) and it was a great event. The support from friends and family created an amazing atmosphere. If you were there you’d understand why we call Guelph the running capital of Canada. Although Sherbrooke hosted the CIS Champs it still felt like we had a home course advantage because a lot of teammates and friends made the trip from Guelph.

CK: So the semi-home field advantage was one of the factors influencing how well you did?

KB: For sure. When you’ve got fans and training partners yelling at you at the top of their lungs you pick up on their intensity and you get fired up. When I took the lead I knew I was about to make it happen because you can hear it in their voices. That extra boost gives you adrenaline and the strength to say to yourself, “listen body, you do what I tell you.”

CK: During your post-race interview you mentioned testing Kelly Wiebe and that he didn’t respond. Were you confident once you left him behind, that you had the win? How many times did you look over your shoulder after that?

KB: I’ve only raced Kelly once before (last year’s CIS Champs) but I know he is a very strong competitor who doesn’t like to leave the race down to a kick. I was expecting Kelly to take control of the race right from the start, but we really didn’t attack the course from the gun. The course was very hilly and muddy so it wasn’t until 5km that the pace really started to heat up.

Kelly and I managed to separate ourselves from the rest of the pack shortly after 5km and he made a crazy move going up the big hill at 6.5km. His move was so fast that I knew he was trying to win the race at that point. I was able to cover his move and regained the 10 meters he had gained on me by the time we were half way up the hill. I could tell he was struggling and decided that this was the time to make my move so I really dug in going up the rest of the hill and over the crest. Kelly wasn’t able to hold on and then I knew I couldn’t hold anything back or let him catch back up.

At first I thought I’d gone too hard and fried my legs so I was worried if it came down to a kick. Two weeks prior, at the OUA Champs, I lost in a kick to Alex Genest and I knew I had to put as much distance between him and I before we got to a kilometer to go. I was confident I could run away with it at 3km to go but I knew I couldn’t hesitate. I never looked over my shoulder once after I took the lead. I knew Kelly and Alex weren’t going to lie down and hand it to me so I just focused and getting as far ahead as possible.

CK: This was your final year, yes? What is next for you?

KB: This was my final year and it couldn’t have ended any better. After coming second individually the last two years I had to win this year. There was no chance I was going to hold anything back because it was the end of my collegiate XC career. Also, I remembered telling my coach, back when I was a freshman, that we would win five straight team titles and I wanted to make good on that promise. The ultimate finish to my collegiate career would be to capture a team title in indoors this season along with individual gold medals and CIS records in the 1500m and 3000m.

Next on my plate, I hope to make the World Champs team this summer and compete at the Olympic Games in London. I’m planning on a big breakthrough this summer as I’ve got something to prove after 3 summer track seasons stuck at 3:40 for the 1500m.

CK: What is the process for achieving these international-level goals?

KB: I think when you improve so quickly it’s hard to figure out exactly what you did to make you so successful and what it’s going to take to get you to the next level. After dropping 17 seconds off my PB in the 1500m from age 18 to 20 it’s taken me 2 more years to figure this out. This fall was all about mileage for me. I bumped my weakly mileage by over 30% to increase the amount training I can handle. I think this will improve the amount of quality I can handle as I approach the outdoor season. All this hopefully means faster 1500m and 5000m times. Also, the mental side of my game needed work and that comes with experience.

KB: Well, this fall I averaged 75-miles per week and had a peak volume of 97 miles.

CK: During the winter it appears you focus on mileage. What does your week look like this time of year – you have a Sunday long run, yes?

KB: Yes, the emphasis in the fall in winter is shifted more towards quantity rather than quality.  However, at specific times during these seasons it is important to tap into the anaerobic systems. A typical week of training during a high mileage phase might look something like this:

CK: I understand your parents forced you into running during grade 9. What sort of crime was befitting of that judgment?

KB: Yeah that’s true. I didn’t really want to join a team in grade 9 but they convinced me it would be fun. I wish I could say I joined the team because there was a girl I liked or something but the truth is it’s because my mom made me.

CK: She’s a girl and you’ve got to like your mom.

KB: Cannot be replaced. I wouldn’t be where I am today without her.

CK: Well said. So do your parents have a running or sporting background?

KB: Neither of my parents competed in cross-country or track but they played other sports. My dad played soccer and basketball and my mom played baseball.

CK: Did you grow up playing hockey?

KB: Oh of course. Until I started grade 11 I still considered myself a hockey player not a runner. I made the switch to track and field because I could tell I had more potential for success than in hockey. I really dreamed of representing Canada as a hockey player but when I found out about competitions like World Jr. XC and World Youth Track Champs I really thought I had a shot at making those teams so I switched my focus.

KB: I wasn’t nearly as good at hockey as running. I played AA hockey for my city in grade 10. In grade 11 I quit hockey and committed fully to running.

KB: Yeah I’m a Leafs fan. But I’ve never been one to give up on something just because it was difficult, so I’m sticking with them. Sure the Sens (Ottawa Senators) may have won more games this season, but where are their fans when the team is not playing well? … cheering for Montreal.

CK: Do you think the Ottawa’s attendance problem comes from having the arena well out-of-town or is that an excuse? It seems many Torontonians don’t mind heading to Buffalo to watch games?

KB: I don’t know what the reason is but it’s funny because when the Leafs play the Sens in Ottawa there’s just as many Leafs fans at the game as Sens fans. I feel bad that the Sens’ star player, Alfredsson, gets booed at home games.

CK: Where does your coach Dave Scott-Thomas come into the picture, at least in terms of your development from hockey player to runner compared to going from just a good runner to the 2011 CIS Cross-Country Champion?

KB: DST is the man. He has been and continues to be instrumental in my development. Dave and I have been working together for 9 years now and he never stops thinking of ways to make improvements and get faster. That’s what makes DST such a good coach and mentor; he’s just so passionate about the sport. And it’s his vision that drives the success of our group here in Guelph.

Dave has this attitude that he’s just going to get it done. He sets goals, get’s after them, then figures out how to do it better. And he imparts that attitude onto the athletes he coaches. I think that’s why our coach-athlete relationship works so well. We set high goals together, and Dave is invested in my success. But if I don’t achieve what I set out to do I don’t feel like a failure of an athlete and Dave doesn’t feel like a bad coach. We just sit back down and figure out how to do better.  When you think of it like that success isn’t so complicated and that is the most important thing DST has taught me.

Dave Scott-Thomas on what Kyle did different to achieve gold:

“There was nothing radically different for Kyle. He’s an exceptional athlete and there wasn’t anything broken to fix. He did run a bit more volume this fall, but that was not reactionary to anything, just that each year he matures a bit more physiologically.

There’s a natural progression of growth to follow in the sense that each year is different than the one before, but thematically we stuck to the plan. It’s not that he was off in the past (it would not have been surprising if he’d won in either of the past 2 years), but Saturday was sure his day.”