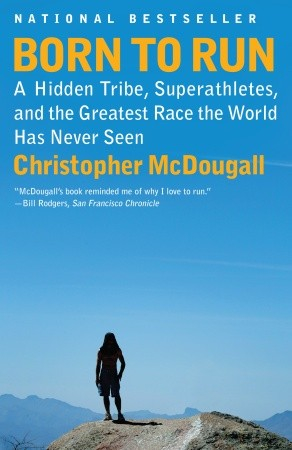 A Hidden Tribe, Superathletes, and the Greatest Race the World Has Never Seen.

I sit blurry-eyed watching planes take off through the floor-to-ceiling wall of windows framed in chrome and glass. I am sort of contemplating paganism, minimalism…bagism. Perhaps John Lennon should have added the former two isms, to his indelible anthem Give Peace a Chance. I am reading former war correspondent Chris McDougall’s book, Born to Run and I can’t put it down, hence the reason for the blurred vision and the reference to minimalism.

Born to Run begins with McDougall struggling on his runs, suffering multiple injuries due, he believes, to shoes that rather than support and protect his feet, cause injuries. His own physician told him to find another sport. Not willing to give up that easily, McDougall visited several practitioners before serendipitously accepting the assignment (from Runner’s World Magazine) to locate the lost tribe of super athletes, the Tarahumara Indians of Mexico and the potentially mythical ghost Caballo Blanco, also known as The White Horse, all located deep in the Mexican state of Chihuahua in a land-bound region known as the Copper Canyons where the Tarahumara live just as they did 500 years ago. They are so reclusive, people from the outside world have rarely ever seen them. In fact, McDougall only eerily discovered a Tarahumara tribesman when he found himself nearly standing on top of his hut.

McDougall sets out to tackle the precarious notion that the mega-dollar running shoe companies like Nike, create more problems than solutions by manufacturing their technical shoes with too much cushioning, unnecessary stabilization and heel counters.

Having just finished chapters 21 through 24, I am agog from an intense session of reading that I dove into between flights, I have to get up and have my goods x-rayed by airport security before I am to wait again, this time in the boarding area, to listen to final announcements over the PA system – and continue reading. I am fitting in as much time with the book as I can before getting onto the next plane. I will then quickly open the book again in my window seat. Forget the breathtaking vistas that we will travel over – 600kms of snow-capped Canadian Rocky Mountains and the safety announcement from the in-flight crew, I am bent on getting lost in the story again; it’s just that good.

Chapter 24 follows introductions from chapter 20-on, of new and prominent real-life characters who turn the anticipated ultra-race of the century into a kind of pre-expedition Fear and Loathing nightmare for fine-tuned athletes and the entrenched author. By the way, his own character never overshadows the point of the story, however, the young and wild Jenn ‘Mookie’ Shelton and Billy ‘Bonehead’ Barnett take the stage when they end up partying late into the night, disturbing hotel staff to the point of nearly getting the boot by management. At this time, McDougall introduces the greatest ultra-runner of our time, Scott Jurek who will take on the Tarahumara, toe-to-toe, in the greatest ultra race never to be seen. Also another of the long cast of characters, ‘Barefoot Ted’, an attention-seeking barefoot proponent from LA who is rather annoying. He plays the bad guy, if there is to be a bad guy, it should be Barefoot Ted, he’s just that annoying.

McDougall dives into ultra-racing lore when he takes the reader to the Leadville 100 Trail Race and the media spectacle that it became when organizers pitted the miss-managed Tarahumara against Ann Trason the queen of ultras or bruja. The tribesman’s manager Rick Fisher motivated the tribesmen by referring to Trason as a “bruja”, which is Spanish for witch.

Before commencing the final leg of their journey to the bottom of the Copper Canyons to start the ultra race, McDougall who was about to climb into the rattly bus, discovers his main character, Caballo Blanco sitting on the roof planning to ride with the luggage while the bus trundles down the treacherous road, a road that has taken lives; carcasses of vehicles that have steered too close the edge lay strewn about the canyon floor, which the passengers lay witness to as they descend to their destination – an ancient mining town eight thousand feet below the lip of the canyon, McDougall writes:

‘Caballo was on top of the bus, catching bags for the driver. Jenn and Billy were already beside him, lounging in a cushy pile of baggage. “You’ll never get a ride like this again.

No wonder the Tarahumara thought Caballo was a ghost. There was no telling what this guy would do, or where he would turn up. “Forget it,” I said. “I’ve seen this road. I’m getting in the crash-ready position inside between the two fattest guys I can find’.

McDougall’s writing style is somewhat reminiscent of Jon Krakauer (Into Thin Air), he also writes with a hint of Gonzo, perhaps testing the genre. It all balances well within the parameters of the story. McDougall breaks off into very informative vignettes that introduce us to the aforementioned world-class ultra-runners and the brilliant coach, Dr. Joe Vigil. McDougall admirably brings them to life on the pages, effortlessly.

McDougall’s encounter with the Tarahumara was fruitful in that they demonstrate that running for hours at a time is completely doable, even barefoot. In fact, the tribe proves that running daily is cathartic, healthy and spiritual. Running long distances is man’s history: persistence hunting, running for transportation purposes and of course for survival. He successfully finds, with additional subsequent research, that we were born to run, meanwhile, he tells this story in a way that will surely coax the most sedentary and devoted couch potato to get up and run out the door towards freedom.

As the plane landed at my final destination, I lent back in the seat and reluctantly closed the book, but I had to deplane. I was the first to jump up into the center aisle to avoid the claustrophobic feeling I get when having to hunch in the queue of passengers struggling to pull baggage from the overhead compartments. The need to exit was highly magnified as Born to Run was motivating me to bolt for the tarmac, gallop across the runway and into the alpine forest. I almost did, the book was just that good.