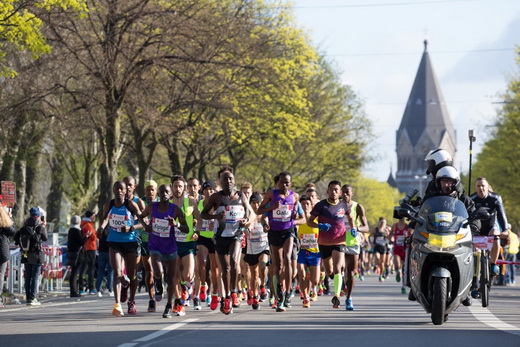 Both Olympic Marathon champions from London 2012 will be on the start line for the Haspa Marathon Hamburg on April 23: after Stephen Kiprotich’s participation was confirmed last month, Tiki Gelana has completed the duo by confirming her entry for Germany’s biggest spring Marathon. Their presence represents an unprecedented quality in Hamburg’s elite field since never before has one Olympic gold medallist competed here. In terms of the overall field, at present more than 15,000 runners have entered for the 32nd edition. Places remain available and registration can be made by going to the website: www.haspa-marathon-hamburg.de

„This is probably the best elite field in the history of the races which began more than 30 years ago. The strong elite fields and the current entry figures promise a great Haspa Marathon Hamburg,“ said race organiser Frank Thaleiser.

Tiki Gelana’s national record of 2:18:58 makes her the fastest woman runner to have entered the Haspa Marathon Hamburg by a considerable margin since she is the first sub-2:20 performer to compete. In 2011 and 2012 she was unbeaten over the classic distance. After winning in Amsterdam, Gelana, who is now 29, won the Rotterdam title and set the current Ethiopian record. This sequence of success was crowned by her Olympic triumph in London.

Her personal best in Rotterdam in 2012 makes her the fourth fastest woman marathon runner of all time. In 2016 she suffered setbacks and the fast course of the Haspa Marathon Hamburg offers a good platform to show her true capabilities once more. Her strongest rivals on April 23 are likely to be Jessica Augusto of Portugal and possibly the Kenyan Viola Kibiwot who is making her debut at the distance.

The participation of the men’s Olympic champion Stephen Kiprotich of Uganda, whose best is 2:06:33, and Ethiopia’s Tsegaye Mekonnen has been known for some time. Mekonnen’s personal best of 2:04:32 makes him the fastest man ever on the Hamburg start list. Two more talented Ethiopian runners have now been added to the mix: Tsegaye Kebede, the 2008 Olympic bronze medallist and Tadesse Tola. Kebede’s impressive career so far includes victories against high-quality fields in London and Chicago. He ran his personal best of 2:04:38 in winning Chicago and has broken 2:06 on three other occasions. At 29, Tola is one year younger and won a bronze medal in the 2013 World Championship marathon. He ran his best time of 2:04:49 in finishing third in Dubai in 2013.

Another athlete to watch should be Eric Ndiema who is making a return to Hamburg. The 24-year-old Kenyan has a good pedigree in the race, finishing second here in 2:07:00 in 2014. His current best is 2:06:07. A total of six athletes who have run under 2:07 are now on the start list for the April 23 race and that includes a trio who have broken 2:05. A clear sign that this is the best quality field ever assembled in the history of the Haspa Marathon Hamburg.