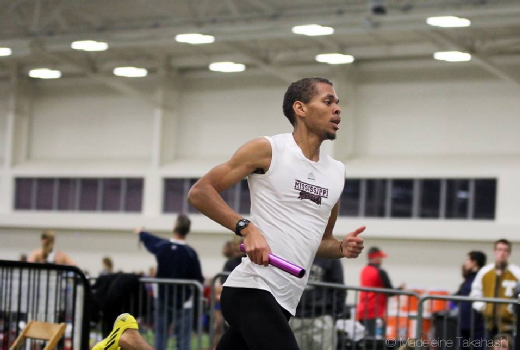 He is now the second fastest Canadian all-time behind Kamloops native Gary Reed, who ran 1:43.68 at the Monaco Herculis meet in July of 2008. Reed earned a silver medal at the 2007 Osaka IAAF World Track and Field Championships.

McBride ran alone for much of the two-lap race. The second place finisher was Raheem Skinner who was well back finishing in the time of 1:53.29.

“The race went well. It didn’t go exactly as planned. We wanted to be a little faster through 400m and 600m, but I finished strong though,” said the 21-year-old. “I am very happy.”

McBride is a former NCAA indoor and outdoor 800m champion. This race is the first time that he has run faster than 1:45.00. The 2016 Rio Olympic Standard is 1:46.00. The performance takes the pressure of McBride, who will now need to finish top-three at the National Olympic Trials that will be taking place in Edmonton, in July.

McBride told Athletics Illustrated, “It’s been a while since I ran a personal best. Based off my training, we knew I was in shape to potentially run a new best time. I can’t wait until we start the more specific training!”

The current world record is held by Kenyan, David Rudisha, who finished the 2012 London Olympic final in the time of 1:40.91.