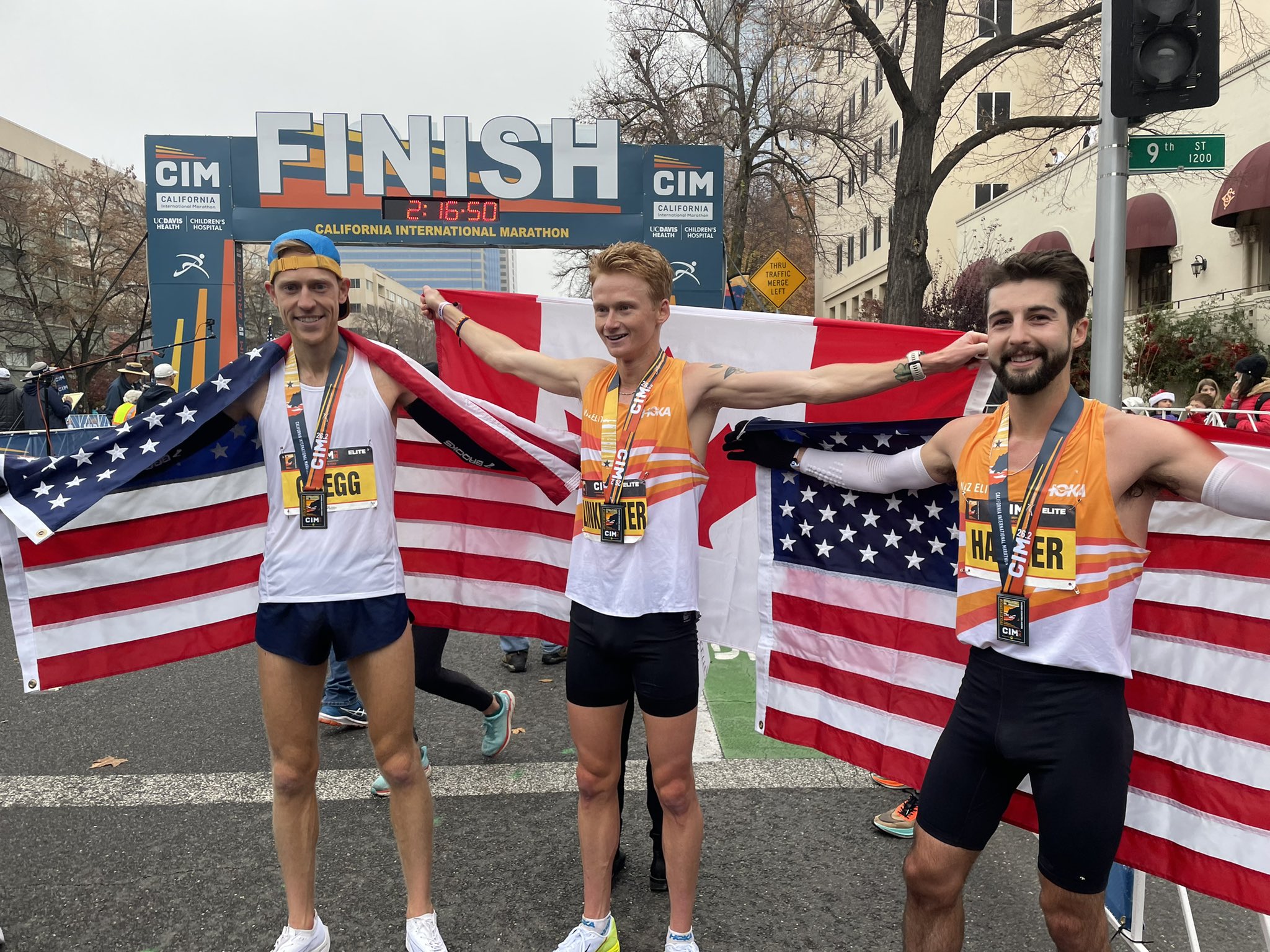 Sunday spelled the return of the California International Marathon. The race was cancelled in 2020 due to the coronavirus

Gregg ran the early stages of the race in the lead pack but pulled away past the half-marathon mark to finish in a personal best time of 2 hours, 11 minutes, and 21 seconds.

“I love coming back here,” Gregg said shortly after embracing his wife, father, and sister at the finish line. “I’ve done other marathons, but I always want to come back and do it at home at the people’s marathon.”

Canadian Rory Linkletter ran a personal best of 2:12:52. In his marathon debut, Nick Hauger, of Flagstaff, AZ, finished third in the time of 2:12:59. Both men are members of the Northern Arizona Elite training group.

Vaughn, of Boulder, Colo., had been a professional track runner for over a decade before deciding to attempt her first marathon just 12 weeks ago. A mother of four and a realtor by trade, Vaughn used her prior experiences in Sacramento as positive momentum in her marathon debut.

Vaughn, of Boulder, Colo., had been a professional track runner for over a decade before deciding to attempt her first marathon just 12 weeks ago. A mother of four and a realtor by trade, Vaughn used her prior experiences in Sacramento as positive momentum in her marathon debut.

“Sacramento has always been wonderful to me in my running career,” said Vaughn. “I made my first Team USA here at Sac State, and last time I was here, I won a race. I had to keep the streak going.”

Vaughn ran the first half of the race conservatively splitting 1:14:48 but turned on the jets to run nearly three minutes faster in the second half.

Vaughn’s finishing time of 2:26:53 is not only a CIM course record — eclipsing the prior record of 2:27:33 by Volha Mazuronak of Belarus — but is also the fifth-fastest debut marathon by an American woman.

San Diego native Molly Grabill set a six-minute personal best and finished in second place in 2:29:17, and Carrie Dimoff, of Portland, OR was third place in 2:29:33 — the first time three women have broken 2:30 in a single CIM race.

Both race winners, Gregg and Vaughn, take home $10,000 in prize money, plus performance bonuses. Prize money is divided equally between the men’s and women’s fields, with monetary prizes going to the top 10 finishers for each.

The California International Marathon is organized by the Sacramento Running Association, a nonprofit organization dedicated to finding ways to encourage people of all ages and abilities to run. SRA is committed to developing new, quality running events that appeal to a broad variety of runners.

“We were thrilled to be back this year with the ‘comeback edition’ of the California International Marathon,” said Scott Abbott, executive director of the Sacramento Running Association. “The SRA team knows how much this event means to the greater Sacramento community, and it was so meaningful to see community members gather along the marathon course to cheer on the thousands of runners embarking on running the marathon.”

The field of more than 9,000 marathon runners and nearly 1,000 CIM relay runners was expected to fill 7,500 hotel room nights and provide an estimated $10 million economic impact to the Sacramento region. In addition to the impact on local hotels, restaurants and retailers, the event raises more than $500,000 for local charities and community organizations through leveraged fundraising and direct giving every year.