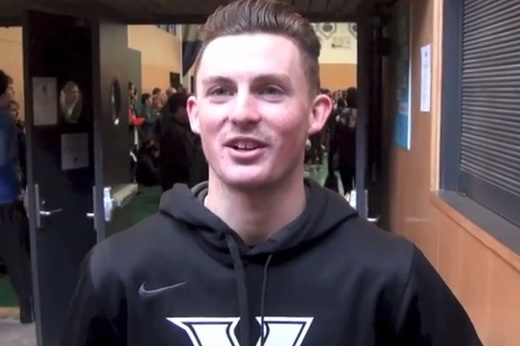 Brendan Hoff, who is in his final year of high school at Reynolds Senior Secondary in Victoria, BC, just broke Vancouver Island middle-distance track records in the 1500 and 3,000-metre distance events. This bodes well for his Canadian Interuniversity Sport (CIS) career starting next season.

He was competing in the 2016 Island high school track and field championships that took place Wednesday and Thursday, May 18 and 19 at the University of Victoria’s Centennial Stadium.

The 3,000m record was previously held by his future teammate Thomas Getty, who competes for the UVic Vikes. In 2013, Getty set the Island record with his performance of 8:34.93. Hoff narrowly improved on it, in windy conditions. Incidentally, both Getty and Griffin ran for the Mount Douglas Rams.

“The plan going into the 3k on Wednesday was to go after the record, but not go too crazy, considering the 1500m was where I really wanted to hammer down,” said the Campbell River native. “But I ended up leading end-to-end with not so great conditions. The wind was not my friend that day but I knew I had to fight through it when I heard my split was 8:04 (200m to go). So I closed hard and finished in a time of 8:34.70.”

Hoff ran the 3,000m on Wednesday and the 1500m on Thursday under similar conditions; mild with strong winds.

Hoff is no stranger to success; the Vikes, already a successful program are likely quite pleased with that they see.

“Crossing the line felt pretty good knowing now that I own every single island record in the 1500m and 3000m events from grade nine all the way to senior. On top of that I won top male athlete and ran a 49-second 400m as the anchor leg of my relay team placing second,” Said Hoff.

After listening to many different NCAA school offers, Hoff announced in December of 2015 that he will be attending the University of Victoria. Victoria is an attractive place to compete for any Canadian and bolstering his decision was the fact that his Coach Heather Henniger is based in the city.

In December Hoff told Athletics Illustrated, “I’m very excited to join the program at the University of Victoria. I am proud to be able to contribute to an already amazing program. I love everything about UVic and I look forward to representing the Vikes on an international and national level.”