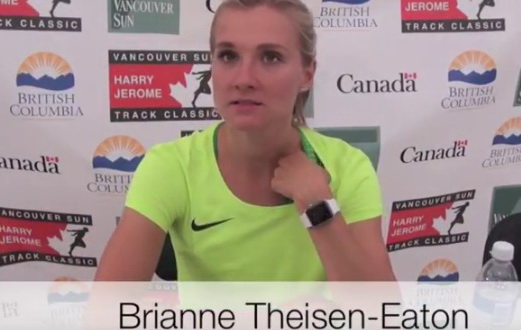 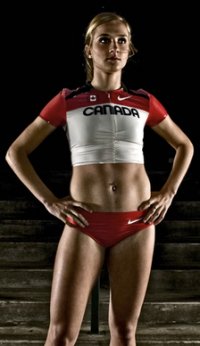 Twenty-four-year-old Brianne Theisen is one of Canada’s top heptathletes. She was the national champion in 2009 and competed in the IAAF World Track and Field Championships that same year. She owns the Canadian indoor record with her 4555 points. She grew up in Humboldt, Saskatchewan and later attended the University of Oregon.

Theisen is also one of the best NCAA division 1 athletes. She broke several school records and won back-to-back NCAA heptathlon titles in 2009 and 2010. She is a five-time NCAA champion including being a part of the winning 4 x 400 metre relay team. More recently she scored 6,376 points to win the prestigious Hypo Meeting heptathlon on Sunday, May 27th in Goetzis, Austria.

Christopher Kelsall: Was growing up in Humboldt, Saskatchewan conducive to developing as an athlete? What other sports did you take up as a child, there?

Brianne Theisen: Yes, I think it was conducive to developing as an athlete. Humboldt was great to grow up in because it’s a tight knit community that loves sports. There were always fans out watching and supporting events (whether it is t-ball, high school sports, or the Humboldt Broncos). I’ve found that whenever someone in Humboldt is doing something great (and not just in sports, but in all areas of life) the community gets behind that individuals and does whatever they can to help them. I think Humboldt is a community that is very proud, and with good reason.

I played pretty much every sport while I was living in Humboldt. As I got older I had to dwindle it down to just a couple of sports. In elementary school I played soccer, volleyball, basketball, badminton, and track and field. Then in high school, because I was starting to drive to Saskatoon four times a week to do track with the club team there, I just played soccer and volleyball, and by grade 11 I was only playing volleyball.

CK: Alexander von Humboldt, would be proud. Saskatoon is over an hour each way, yes? Did you end up moving there to train before college?

BT: I usually lived there in the summer with a relative. But during the school year, I just commuted four days a week with three or four other track athletes in the Humboldt area. We would carpool and take turns driving, so that made it a lot better.

CK: Did having a Junior A level team (Broncos) turn you into a hockey fan? If so, who do you follow?

BT: No, it hasn’t really turned me into a hockey fan. Although I went to a few games while I was in elementary school and high school, I was so busy with my own sports that I never really had time to go to games or follow it.

CK: You competed at a young age (20) in your first IAAF World Track and Field Championships. Was the process of competing in Beijing and Marakesh at the World Junior Championships a good stepping-stone process for you?

BT: I think that World Youth and World Junior events set young athletes up nicely for what’s to come in the future. These events are basically the same thing, just with younger athletes. But most of the athletes that I competed against at these events, I’m not seeing at the World Championships and Olympics.

CK: What events before the Moscow Worlds this summer do you have on your schedule?

BT: I will go to Moncton to compete in the Canadian World Trials. I have to get top three in the heptathlon there to advance to the World Championships. I will probably train pretty hard all the way through this event and just focus on getting through this event with as little effort as possible since getting top three won’t be too hard, and I really want to be sharp and focused for Worlds. Then after this, we will take a slight recovery, I am getting married July 13th, and then a week after the wedding, we will leave for Tallin, Estonia for a training camp and a small meet right before heading over to Moscow.

CK: Do you have any National Track League events on the radar?

BT: I don’t this year. We competed so much in April and May that my coach just wants me to spend June at home training, and I didn’t disagree with that because after spending the last three months living out of a suitcase, it’s nice to have your clothes put away in your closet for more than 3 days 🙂 I hope to compete in a few of those meets next year however.

CK: How does being the first Canadian (along with fellow Canadian decathlete Damian Warner) to win at the Hypo meet since 1966 rank in your accomplishments?

BT: I never go into a meet looking at the history and records and saying to myself, “I am going to beat all those records and I want to become the first lady to win the Hypo Meeting.” Usually I just try to compete hard and have fun and whatever happens, happens. I still don’t think it’s really sunk in for me, and don’t think it will until I’m older and look back on it. As an athlete, sometimes it’s hard to realize the magnitude of a meet and what you’ve accomplished because in reality, it’s just another meet, it’s what you train for. I think if you went into a meet feeling the full impact of how big an accomplishment it really is to win it, you’d feel a whole lot more pressure than you’d need to feel.

With that said, I was extremely happy to win, and it was the coolest thing winning it and standing on the podium with another Canadian in Damian. This is a huge step in my career, especially since I just made my step from a college level athlete to a professional athlete. The fans were great, and I’m happy that they enjoyed watching the competition because I definitely loved competing there, and can’t wait to go back!