The British trials for the marathon and 20km race walk for the Tokyo Olympic Games, will take place this Friday, March 26 starting at 6:00 AM GMT. The marathons begin two hours after.

The trials will be streamed by BBC Sport and BBC iPlayer and through British Athletics’ website.

Ben Connor, 28, is the only British male to run faster than the World Athletics standard of 2:11:30 with his 2:11.20 from the London Marathon that took place in London’s St. James Park in October. With that performance, he now needs to only finish first or second regardless of the finish time, to be an automatic selection for Tokyo.

However, there is Nastasha Cockram winner of the 2020 London Marathon as well as Lily Partridge who owns a best of 2:29:24.

In the 20km race walks, Tom Bosworth (Andi Drake; Tonbridge) headlines the men’s contest and is currently the only British athlete who holds the standard for Tokyo. Callum Wilkinson (Rob Heffernan; Enfield & Haringey), who showed great form in clocking 39:05.85  in the 10,000m race walk earlier this month, will be chasing the 1:21.00 World Athletics qualifying mark having clocked a PB of 1:21.21 in Lithuania last September.

Sarah Inglis appears to be running under the radar. As a potential dark horse, she has run the marathon as fast as 2:29:41 in Chandler, AZ in December. It was her debut. The Scottish schoolteacher practicing in Greater Vancouver (Langley), has also run the half marathon in the time of 70:24. She is currently close and has every chance to finish top-three and under the standard. 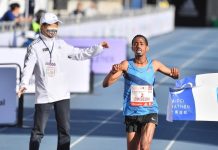