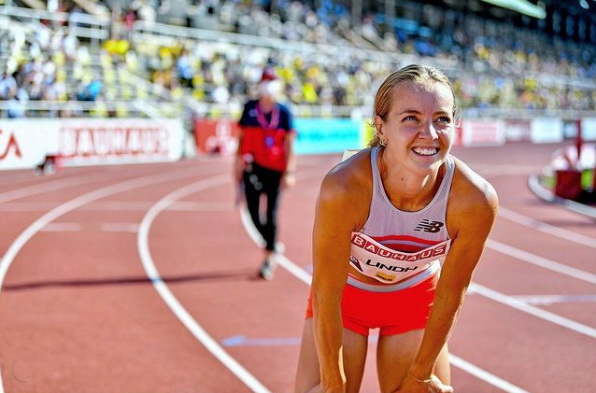 Lovisa Lindh of Sweden was left off the national team that competed at the Tokyo Olympic Games. She was world-ranked in the 800m event high enough to warrant the nod from the Swedish Athletics Association. They told her that she wasn’t going because she was not likely to finish at least top-eight. Only eight athletes toed the line in the Olympic final.

Her personal best (1:58.77) is faster than the times recorded during the preliminary rounds, by all 46 athletes and based on her PB, could have made the finals. Her performance Friday in Brussels at 1:59.49 is a season-best and qualifies for the World Athletics Championships. The time is also faster than all 46 athletes in the preliminaries and there would have been a good chance to make that final.

She finished in sixth position and just a little more than one second behind Keely Hodgkinson of Great Britain, who finished second in Brussels in 1:58.16 and earned a silver medal in Tokyo (1:55.88).

Natoya Goule of Jamaica won in the time of 1:58.09. Finishing third was Jemma Reekie of Great Britain, who finished fourth in Tokyo. Friday, she clocked the time of 1:58.77; the same as Lindh’s personal best.

Christine Mboma of Namibia clocked a solid 21.84 for the win in the women’s 200m event. The 18-year-old sensation is coming off of a silver medal performance from the Tokyo Olympic Games where she ran her personal best of 21.81.

The Tokyo performance is a women’s U20 world record and an area record. Friday she appeared to cruise to victory, ending the Jamaican juggernaut. Mboma bested Jamaican Shericka Jackson, who has been tearing up the tracks in 2021. She is a five-time Olympic medallist and earned bronze in the 100m in Tokyo behind Elaine Thompson-Herah and Shelly-Ann Fraser-Pryce, all Jamaicans, all the time.

Great Britain’s Dina Asher-Smith finished in third position. She recorded a season-best of 22.04. Asher-Smith set the national record at the 2019 Doha World Athletics Championships, clocking the time of 21.88.

The infamous American, Sha’Carri Richardson, put her money where her mouth is and established a little redemption from her last-place finish two weeks before in the 100m event. This time she clocked a respectable 22.45 and finish fourth. Her best is 22.00 from 2020. The 21-year-old was left off the team going to Tokyo due to testing positive for THC. After a month’s suspension, she returned by racing the Prefontaine Classic in Eugene, Oregon finishing last in the time of 11.14 — her best is 10.72.

Francine Niyonsaba from Burundi bettered the national record clocking a 14:25.34.

She has run seven national records as well as a national best, three in 2021.

Ejgayehu Taye of Ethiopia tried to make a race of it and finished in second and not far back at 14:25.64, but Niyonsaba simply ran just fast enough for the win. Taye owns a best of 14:14.09.

Finishing in third was Kenyan great, Hellen Obiri, who clocked a finish time of 14:26.23. The 31-year-old holds the Kenyan national record and is a two-time Olympic silver medallist. She earned silver in both the Rio and Tokyo Olympic Games.

Final Diamond League meet of 2021 is happening in Zurich>>

Chicago Marathon offers up a deep elite field for Sunday