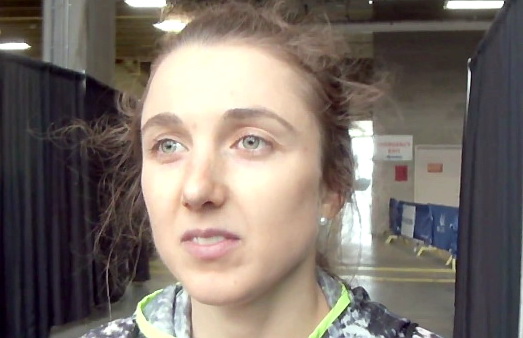 There must be something about the streets of Victoria, BC that suit Burnaby’s Lindsay Carson. The former Whitehorse, YT resident was back in the capital to win her fourth consecutive GoodLife Fitness Victoria 8K.

Sunday, she was pushed by Oak Bay High student Justine Stecko but managed to hold her off.

“I am happy with my performance and knew that there were changes to the race this year with a loop course and a later start,” shared the Environmental Engineer. “Justine (Stecko) kept me honest throughout the whole race; she has a bright future in the sport.”

Stecko runs with the Prairie Inn Harriers Youth Team, a successful program organised and coached by two-time Olympian Bruce Deacon, who had several other athletes in the race.

Stecko finished just 12 seconds back in the time of 27:38 for 17th overall, which is a very strong performance for the teenager.

“I couldn’t ask for better weather, all and all it was another great Thanksgiving weekend spent in Victoria. I am now looking forward to cross-country season and my end goal will be the Canadian Championships that are taking place in Kingston, Ontario.

Former UVic Vike athlete Brittany Therrien had a great performance finishing third and second in the 25-29 age-category in the time of 28:28.

Amanda Johnson was the first master to cross the line, she finished in the time of 32:35. Johnson competes in the 40-44 age-group.

In the men’s race, it was another Burnaby resident who won. Justin Kent nearly cracked the 23-minute benchmark with his 24:04 finish time. It was a very strong performance. Former Vike Thomas Riva, who was the national 1500-metre champion in 2016 finished second in 24:35.

Alex Cameron finished third in the time of 24:49.

“The race went well. I was hoping to get under 24-minutes Sunday, but other than that I felt it was a solid effort,” Shared Kent. “Next up is the provincial and then national cross-country championships. In the long run, the big focus is for me to get a big base of training for track season.”

The first master was Craig Odermatt of Victoria; he finished in the time of 26:34 for sixth overall. Odermatt (45-59) is gearing up for a strong cross-country season.

“I am pleased, it was a solid performance and quite a bit faster than last year,” said Odermatt.