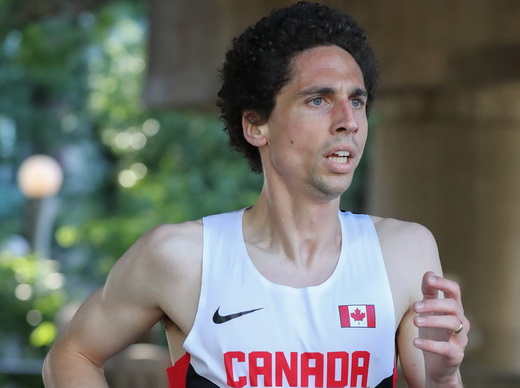 In what could be a massive boost for Canadian marathoning, Cam Levins has announced he will tackle the half marathon at the Scotiabank Toronto Waterfront Marathon October 22nd.

The former Canadian 10,000m record holder at 27:07.92 has extraordinary credentials on the track, and coupled with his appetite for high mileage training volume it is only a matter of time before he makes an impact in the full marathon distance. His debut at the half marathon in Toronto is a giant leap towards that goal.

Now 28 years old, the native of Black Creek, B.C. had surgery in July 2016 to correct ongoing problems in his foot. Since then he has been especially cautious though he has set an ambitious goal for Toronto.

“My plan is to go out with the marathon pace group at 63 minutes,” he reveals. “What I would like to do is try and qualify for the 2018 IAAF World Half Marathon Championships. So whatever it takes to do that at the very least and if I am feeling good (I will) knock it out of the park. That’s sort of my main goal going into this.”

At a Portland Twilight meet in June, Levins took to the track and ran 5000m in 14:10.92 which is almost a minute slower than his personal best. But it was a starting point.  In August, he raced the Beach to Beacon 10K in 29:24. More recently, he won the Canadian 5K Championship. Being selected to represent Canada at the half-marathon championships in Valencia, Spain, on March 24th, is therefore, a tangible goal.

The comeback has been mounted with an enormous change in his coaching situation. In July he left the Nike Oregon Project, the Alberto Salazar coached group which includes Olympic medalists Mo Farah, Matthew Centrowitz and Galen Rupp, to return to his former college coach, Eric Houle of Southern Utah University.

Reuniting with Houle, who is a proponent of very high training volumes, has seen him head up to Utah’s high altitude for weeks at a time. Cedar City is at roughly 6,000 feet above sea level and some of his longer runs have taken place at 9,000 feet.

“I spent all of July, a bit of June and a bit of August up there getting on the same page as Coach Houle,” he explains. “I don’t feel necessarily the need to be there right now. I think he understands where I am. He continues to give me workouts from a distance. I have been able to train with Ryan Vail here. My plan is to hop back and forth.”

Levins also moved homes during the summer and discovered, to his delight, that American marathoner Ryan Vail was a neighbour. They have been training together up until Vail’s 8th place finish at the Berlin Marathon on September 24th. Levins is relatively pleased with his training.

“I think it’s coming along pretty well, some hiccups here and there,” Levins says. “I feel pretty good about it. It has just been forward momentum, not incredibly fast, but I think I am continuing to improve, so I am happy with that.

“Coach Houle and I have agreed to that (high mileage) and we have been doing it as much as I have been able to. That’s the idea for sure. I have done some 20 mile runs pretty consistently. I live just a couple of blocks from Ryan Vail and he has been a fantastic training partner.”

Levins had originally entertained the idea of running a full marathon but realized he must contain his enthusiasm somewhat. He credits Eric Houle for providing a solid ground on which to build for the future.

“Coach Houle and I think one of the big reasons it works is that we have a really good athlete-coach relationship which I didn’t realize was so important until I left (Utah),” he explains. “I didn’t realize how good ours was. Now, going back, there is a lot of trust there.

“If he tells me to do something, whether I have a discussion about it or not, I will do it. And, he will listen to me. The communication is there. He certainly believes in me. I trust him and if he pushes back on it, its ok. It’s a good dynamic, ultimately, that I just never really developed with the coaching of the Oregon Project.”

Leaving the Nike Oregon Project meant leaving Nike. Running fans have noticed him racing in all sorts of clothing, often his 2012 Canadian Olympic singlet and a variety of training shoes.

For the most part, his foot is no longer troubling him although he sometimes feels an ache. He had been told that it might take a year or more for the pain to be completely gone. He puts this down to nerve damage from the surgery. But he is optimistic about the Scotiabank Toronto Waterfront Marathon. The half marathon distance will prove a good test of his fitness level and provide an indication of what he might expect in 2018.

“I am looking forward to a good track season next year. That is my plan right now, and using that strength and fitness to go into a marathon and knock it out of the park next year,” he says before unleashing specific goals.

“I want to qualify for the World Indoors. My focus will be at the 3000m and mile. Outdoors the 5K and 10K are obviously the big ones for me. I am not counting out anything.”