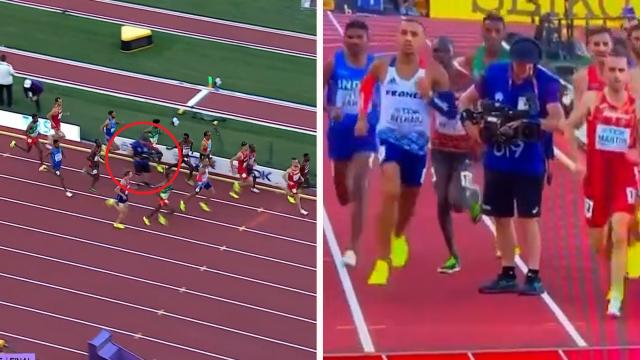 A cameraman shooting video stood on the track at Hayward Field in lane two like it was nobody’s business. Oddly, he simply did not have the common sense to move out to lane five or completely off the track. Additionally, he was pointing the camera the wrong way, unless, getting the backsides of the men was a directive from the studio — likely not.

Apparently, he was video-capturing the women’s triple jump. An experienced track videographer would have heard the starting gun and would have spun on his heel to find out what just started. Not this guy.

What the…?!?! Lol my hat is off to ⁦@karagoucher⁩ for not losing her cool on the live broadcast when the cameraman… became the 29th barrier of the men’s steeple final!? 😳 #wcoregon22 pic.twitter.com/zx00UpdFxL

Hilary Bor competing in the event for Team USA said, “Thank God he was in the second lane, so we tried to stay away from him. I don’t know what he was doing.”

The athletes were moving fast enough that if hit, the cameraman would have sustained an injury as would have any athlete involved in the collision. American Evan Jagr has returned after years of injury. It has taken some time to come back and his return this season has been watched closely.

Tokyo 2020 champion Soufiane El Bakkali of Morocco won the race in the time of 8:25.13. He won bronze during the 2019 Doha Championships.