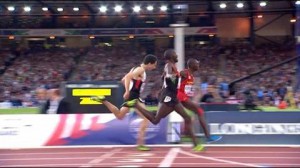 Cameron Levins is about to embark on two seasons of racing that will provide several excellent opportunities for him to take another step forward on the international racing scene.

After his college career where he represented NCAA Division 1 Southern Utah University, he competed in the 2012 London Olympic Games in both the 5,000m and 10,000m distances. He raced the 2013 IAAF World Cross Country Championships that took place in Bydgoszcz, Poland. During 2014 he took in both the IAAF World Indoor Track and Field Championships and the Glasgow Commonwealth Games, where he ended up in a thrilling bronze medal finish in the time of 27:56.23. “The bronze in Glasgow gives me confidence moving forward towards the World Championships in August,” shared Levins.

In 2012 he won The Bowerman as the NCAA’s most outstanding track and field athlete. He earned the respect of his peers by winning the Mt. SAC Relays, where he achieved the NCAA’s best time of the season in the 5,000m event with his performance of 13:18.47—which is fifth fastest all-time in college rankings and the fastest by a college athlete since 2008 and the second-fastest Canadian performance, all-time. At the Payton Jordan Invitational meet, Levins outpaced both collegiate and professional runners to complete the 10,000m in 27:27.96—the second fastest time in NCAA and Canadian history.

This year, to cap off his 2015 outdoor track season he plans to compete in both the 2015 Toronto Pan-American Games in July, then he will follow that up with the 2015 Beijing IAAF World Track and Field Championships. Asked if he will compete in both the 5,000m and 10,000m distances in those events, as he did in the Olympics, he said, “this far out I don’t know. We will have to make a decision closer to the date. We will see how fit I am at that time, but the 10,000m for now will be more of a focus.”

As for range, he is not averse to racing middle-distances, for example Saturday, January 31st he will be racing in the Armory Track Invitational in New York. He will contest both the mile and the two mile races. Levins told Athletics Illustrated, “I am looking to run a really fast mile, first off. I plan to go through the half split in 1:57, which is plenty fast enough and if I am feeling good I might try to go for the Canadian indoor mile record of 3:54.32.” His personal best is 3:57.16. Nathan Brannen set the Canadian record on the same track during the Millrose Games that took place on February 15th last year.

Levins ran his season opener in Washington last week and finished second to training partner Matt Centrowitz in 3:58.75, Centrowitz finished in 3:58.60. The Washington meet was run on a 300m track, whereas the Armory event is on a 200m banked track. The mile Armory Invitational race goes at 5:12 PM EST/2:12 PM PST.

“Alberto (Salazar) feels for a distance runner like me, that the splits should be even in this mile race,” shared Levins. He added, “The New York Road Runners always put on good meets and the track is fast, but I won’t necessarily chase a record, but of course if I am on pace and things are going well and I am feeling good, then I should be prepared to go for it.” At 5:44 he is set to compete in the two mile race.

Levins is known for being able to handle high mileage in training. He has trained as high as 160 weekly miles (260km), however, has pared that down under Coach Salazar to 120 weekly miles through the late fall and early winter. Asked if he feels he possess the speed at this time to compete in the middle-distances, he said, “Through December and January we have gotten into some pretty fast stuff. We will be ready to go. I am ready to run fast.”

For Levins the focus for the indoor season is the February 14th Millrose Games 5,000m, “A lot of very good athletes will be there. I would like to get in a great 5,000m and go after my own Canadian Record.” Levins’s current Canadian indoor 5,000m record is 13:19.16 that he set in Boston in January of 2014.

Additionally, Levins will race as short as 800m at the Canadian indoor nationals, where he will double in the 800m and 1500m events. Currently, Canada is competitive in these distances and the under-distance races will be challenging for Levins, whereas if he races the 5,000m and 10,000m at nationals, he would not be challenged. “I will race at nationals and see how I stack up at the short distances. When Alberto told me I was doing those distances I thought he was kidding. I actually asked him if he was for real,” said Levins.

“It will be good to get some under-distance speed work in. We feel that those events in Canada will be the most competitive distances for me; a good challenge. I will come in as an underdog and see where my speed is. Canada is deeper in those events.”

When asked about his fall mileage and the quality of his workouts, he said, “I am in very good shape now and feel that my sessions are the best ever, so I am fit. Right before the Canadian Cross Country Championship in late November is the last time that I felt I may have had any type of injury. And now my speed training is as good as ever. Really any sort of workouts that we have had, I feel have been better than in the past. The workouts show that. Maybe the races will say something else, but we will see on race day.”

Levins will seek to be in his best form for the late summer Diamond League meets as well as the Pan Ams and World championships. “For indoors we peak at the end of February or early March, then take a little break, after that we are not looking to peak until summer. I have already qualified for Worlds in the 10,000m from my Glasgow race, so then I will be focusing on getting a 5,000m qualification standard.”

Asked how the experiences compare between the 2012 London Olympic Games and the 2014 Glasgow Commonwealth Games, he said, “It was competitive at Glasgow. Part of me was thinking that I wasn’t going against training partners from the US and we were missing the Ethiopians, but the competition is still very good. The performance certainly gave me confidence going into other global type events. Commonwealths were a competitive stepping stone towards Worlds, and I hope the Worlds is also a stepping stone towards the 2016 Rio Games,” shared the 25-year-old.

Asked if he will make an effort to take the Canadian records in the 5,000m and 10,000m this summer, Levins said, “If there is a chance in this outdoor season we would look at, but the 5,000m is perhaps a better opportunity for me. If I am feeling fit, I will take multiple cracks at the 5,000m, as there are always more opportunities to race that distance.”

The IAAF is rumoured to be looking at removing the shot-put as well as the 10,000m distance events from future Olympics. The distance is competed less often and is currently a little less competitive than it has been in the past. Currently the very best distance runners from East Africa move directly to the marathon, where the money is. This is a new phenomenon, as standard practise in the past was to run the 10,000m distance until the athletes felt that they no longer possessed the speed for the distance, then they would move up to the marathon. This new practise of going straight to the marathon may have softened the global competitiveness in the distance.

The jump from the 5,000m to the marathon is a long way – if the 10,000m was removed. Levins agreed, “I can kind of understand where they are coming from, but I would like to keep it in the Olympics, obviously because I am an athlete that competes over the distance, but there is also rumour of moving it to the road, which is interesting. I will tell you right now that the fans in Glasgow were amazing. They told me how exciting the race was. They said it was the most exciting event of the games.”

It does help of course to have a competitive race to thrill the fans. Levins was in the lead during the final lap and was only caught late by Uganda’s Moses Kipsiro and Kenya’s Josphat Bett, which made for a very exciting three-way sprint for gold. “There is a reason why athletics is one of the most watched sports in the Olympics. It can’t be that it is not exciting,” shared Levins.

Finally, asked about the notion of running cross country in the winter Olympics, Levins thinks that is a good idea, as it is currently not in the summer games. Cross country as an event has waned in recent years at the international level. Lord Sebastion Coe, who is a two-time Olympic champion and is seeking the presidency of the IAAF, is campaigning on the idea of cross country being added to the winter games, which has generated fan interest. “I would like to be a winter Olympian. Especially the winter Olympics where it won’t be interrupting the summer track and field events, I can imagine every country will send their best athletes. I am sure without other competing athletics events during the winter, all athletes would want to make the team. Think of how many more countries and how many more fans that do not watch the winter games now, would have a reason to tune in. I have yet to meet anyone who would say, ‘be an Olympian? No I don’t want to do that,’ chuckled Levins.

All that Levins has to train and race for in the near future: potential national indoor and outdoor records, Pan-American Games, IAAF World Championships and some Diamond League meets, he is still very focussed on his 2015 indoor season, with his dual race today at the Armory, as well as the Millrose Games and finally national indoors at the Hershey Indoor Championships in Montreal, QC, that take place February 20, 21 and 22.

“It will be an exciting race. Like I said, they put on a good event and the track is fast.”