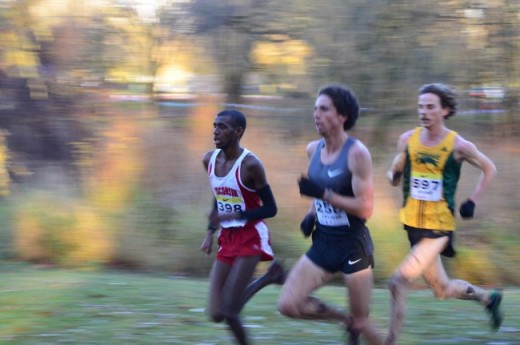 Levins (29:25.7) finished 24 seconds ahead of the favoured, Rob Watson and 39 seconds ahead of Canada’s fastest marathon runner, Reid Coolsaet, both of whom train with the Speed River Track Club in Guelph.

He is currently red-shirting at NCAA Div 1, Southern Utah University where he is working on his degree in Exercise Science.

Levins had multiple injury problems since running the Canadian Cross Country Championships, but the main one was due to a knee issue that lasted nearly the entire month of January. Two weeks before NACAC XC he finally could begin training again.

A couple of years ago I asked Cameron how easy of a decision was it for him to choose Southern Utah. His answer is below. As he has gotten faster each successive season and every year, it appears he made the right decision.

“Choosing Southern Utah was actually a pretty easy decision. I had scholarship offers from a lot of Div 2 schools, and I had Div 1 Universities interested in me, but I wasn’t being offered enough to go to them. Then one of the coaches at Southern Utah contacted me, and it just seemed to be exactly the kind of school I was looking for. Division 1, small school (I like small class sizes and being able to walk from one class to another easily), but still a very good track and cross-country program, and they were offering me a good enough scholarship for me to afford to go”.

The following interview happened shortly after Cameron’s Canadian Cross Country Championships win. Most of the interview ran in the March issue of Canadian Running Magazine. The final question was added in May 2011.

Cameron Levins: It still feels amazing to be called that. I’m sure the euphoria will wear off eventually, but it hasn’t yet.

CK: After winning, how was the reception when you arrived back to school?

CK: Can you take us through the race?

CL: I positioned myself near the front of the lead pack of runners almost immediately, and from there I just made sure I stayed relatively close to Rob Watson before catching him on the final lap. Early in the race, I planned on trying to out-sprint him at the final hill. He looked so strong that I assumed it would be my only shot. I’d like to think I have better finishing speed than a marathoner. However, he faded earlier than I anticipated and I was able to overtake him before the final hill.

CK: Have you done anything different in training to get to this new level of competitiveness?

CL: I just continue to increase my mileage every year. I look to train more and harder every year, and I have continued to improve each season. I understand there has to be a limit on the amount of running I do eventually, but so far my body has been able to handle it. Anyway, I had my largest base ever which I think really helped over the longer distances that you face racing cross-country.

CK: Two years ago you talked about 100-mile weeks in summer. When you say, “largest base ever,” how large?

CK: What goals do you have for the coming track season?

CL: Coach (Eric) Houle and I decided to really focus on the 5000m this year and I am looking to run 13:2x. I have been successful in the 1500m and the mile so far in my collegiate career and I like to consider myself a miler, but Coach has always figured I’m more of a 5000m runner. I have always raced well in the 5000m despite not tailoring my training for it. I missed the indoor season to train for both the NACAC and World Cross Country Championships, but I‘m back running track for Southern Utah University in the outdoor season.

CK: During our interview shortly after you won the Canadian Cross Country Championships you said that for this track season, you would like to run a 13:2X 5000m. How has the season gone so far, this spring?