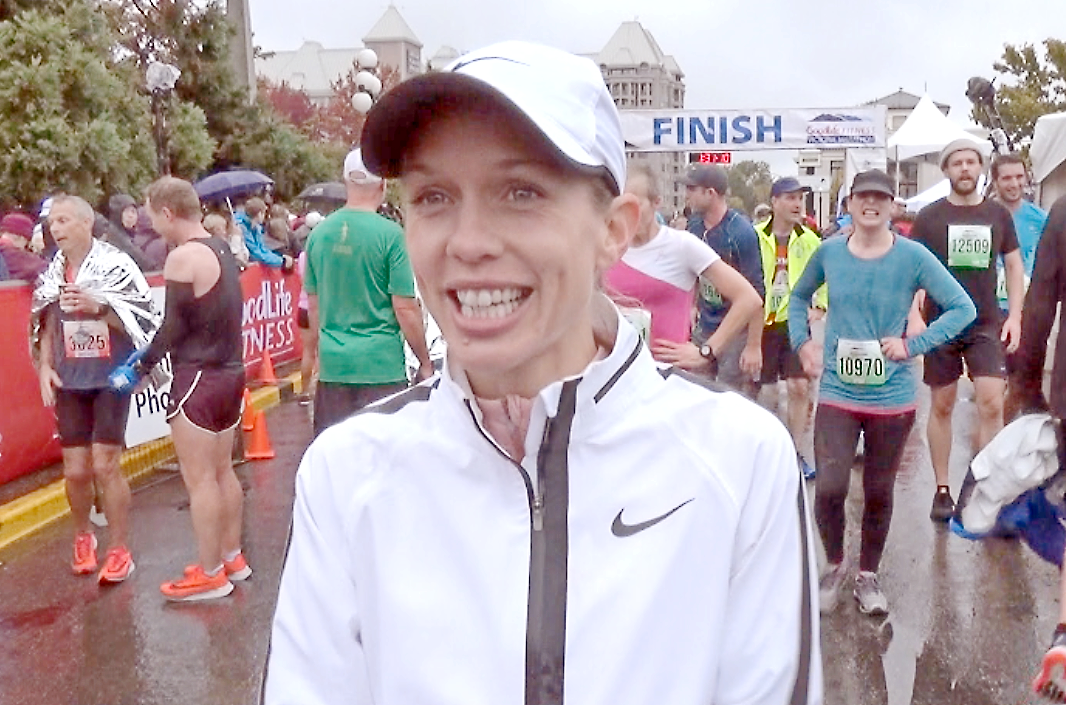 Natasha Wodak of Vancouver currently owns two national distance running records. In 2013, she set the 8K road record with her 25:28 finish time during the Prairie Inn Harriers Pioneer 8K. She finished fifth overall and was the first woman across the line.

Two years later, she set the national 10,000-metre record with her Payton Jordan Invitational time of 31:41.59. Both records still stand.

She currently owns one of the fastest half-marathon performances by a Canadian with her 1:11:20 from New York in 2015. The national record is held by Vancouver’s Rachel Cliff, who set the time of 1:10:08 in Woodlands, TX in March of this year.

Cliff’s 10,000-metre best isn’t far off of Wodak’s having run 31:56.86 at this year’s Payton Jordan Invitational. The two have been occasional training partners and have been competitive with each other for over a decade.

At 37-years-of-age (in December.), will Wodak be able to take Cliff’s national half-marathon record?

The answer is yes she can, but will she? For any race to come together fully, several things have to work out in the athlete’s favour including lack of injury leading up, favourable weather during the race, appropriate competition and smart race tactics.

During the 2018 Gold Coast Commonwealth Games, she ran one of her best races all-time finishing in 31:50.18, just over six seconds faster than Cliff’s best and eight seconds off of her own national record – a strong showing in a global championships competition. A few months prior, she finished the Houston Half Marathon in the time of 1:11:31. Both results are not far off of her personal bests.

“I would love to break 70,” shared Wodak. “I will be running the Houston Half Marathon in January again.”

In addition to the Houston Half Marathon, she expects to compete in the 2019 IAAF World Cross Country Championships that are taking place in Aarhus, Denmark on March 30th. Following that, she hopes to return to the place where she set the national 10,000-metre record in Palo Alto, CA, to compete in the 2019 Payton Jordan Invitational. “That’s all that is set in stone; however, I might try getting into to some cross-country races in Europe.”

Asked about the marathon distance of which she has yet to seriously tackle, having run Toronto in 2:35:16 in 2013, she said, “a marathon would have to wait until after 2020,” which suggests that she will be looking to compete in her second Olympic Games. She competed in the 2016 Rio Olympics.

Wodak made a coaching change to Lynn Kanuka from Rich Lee with the BC Endurance Project. With that change, she has dropped her overall weekly training mileage to a maximum of 108K per week to a previous load of up to 115-130K weekly, but has increased her strength work that she does in the gym. She supplements her running with elliptical exercise and pool running.

Different athletes respond to different styles of coaching. It remains to be seen if the switch to Kanuka and slightly lower mileage will produce results in 2019, but it certainly didn’t hurt her during the spring of 2018.

“Lynn is also very much hands-on when it comes to coaching,” added Wodak. “She is very vocal at training sessions, guiding and supporting.”

According to the IAAF Scoring Tables, a document that provides comparable results correlated by a points ranking system for performances over varied distances, her 31:41.59 suggests a 69:37 half-marathon, while her 31:50.18 points to a 69:57. More impressive is her Ottawa 10K road best of 31:59 from 2015, which the IAAF document points to a 69:27 performance. It’s difficult to poke holes in that type of consistency; her 8K road record is at the exact same performance level as her 31:41.59.

She would be the first Canadian to break the 70-minute barrier in the half-marathon distance and it would set her up for a potential 2:27 marathon. The current marathon record is held by Lanni Marchant at 2:28:00 from Toronto 2013. Cliff ran an impressive debut of 2:28:53 in September of this year on the famous Berlin Marathon course. It is the fastest Canadian debut, all-time and suggests that Cliff is capable of much more.

For Canadian distance running fans, 2019 should provide exciting performances from Wodak and her competition like Cliff and a growing group of talent from across the country.