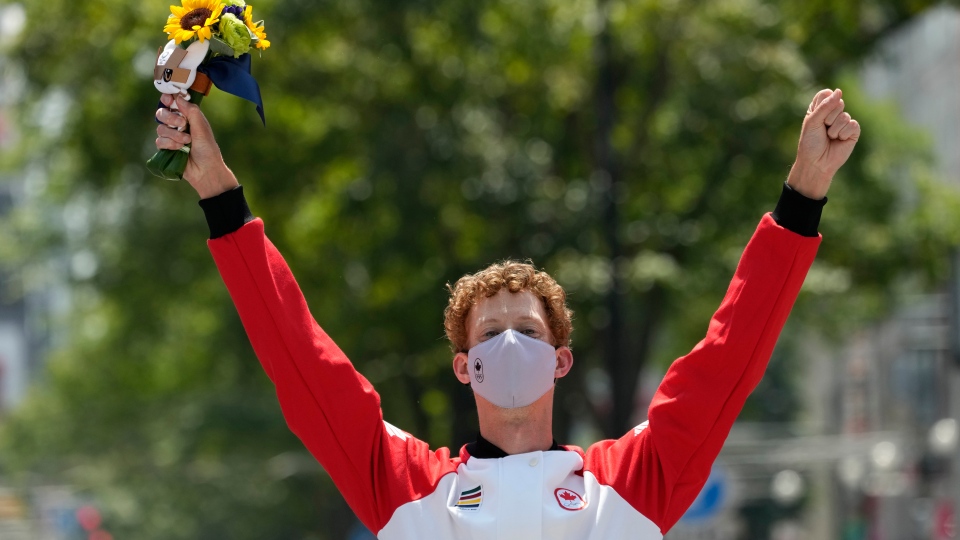 More than any other event, the Olympic Games are where history is made. The Games of the XXXIII Olympiad Tokyo 2020 were always going to be historic for many non sporting reasons, not the least of which was the global COVID pandemic.

Exhausted and thrilled! We ran our hearts and legs out out there today and were delighted with the results. Congrats to ⁦@ByGollyMolly12⁩ on her medal, ⁦@tasha_wodak⁩ on 13th! pic.twitter.com/jpLi0MURc5

What the Canadian athletics team was able to accomplish in Tokyo was arguably the team’s best performance in Olympic history. The team finished fifth out of 70 countries on the World Athletics Placing Table (ranks countries by top 8 finishes) ahead of major perennial athletics superpowers. The team also returns to Canada with two Olympic champions and six medals overall.

Postponed a year by the effects of the worldwide COVID-19 pandemic, these Games played out amid health and safety restrictions, empty stands, and a world in crisis eagerly watching from home in the hopes of inspiration.

“The experience in Japan has been very different from usual events,” said marathoner Malindi Elmore. “We didn’t stay in the Olympic Village and the COVID rules in Gifu (the site of Athletics Canada’s pre-Games training camp), and even more so in Sapporo, have been very strict. We have had a lot of quality time together as the Canadian team in our hotel rooms and training venue.”

“I think the Games were great. Japan did a really great job of making the best of the situation. I would have loved to see it in a non-COVID year,” said three-time Olympian Melissa Bishop-Nriagu. “Volunteers were extremely friendly and organized. Food was good in the Village and transportation was the best I’ve seen at a Games.”

Just like that after a extra year wait the Tokyo Olympic experience is over. Thank you everyone for all the love and support! pic.twitter.com/xkKCBhH7fX

On the field of play, the Games proceeded with the usual drama, inspirational moments, and historic results synonymous with Olympic events.

Whether it was the track, the field or the road, Canada’s athletics team represented our country with pride, dignity, and greatness.

“I’m extremely satisfied with the team performance,” said Athletics Canada’s High Performance Director Simon Nathan. “We are a high performance program with significant funding from Sport Canada and the Canadian Olympic Committee via Own The Podium. They demand medals and our two gold, one silver and three bronze are our team’s best performance at the Games since the 1930s.”

Decathlete Damian Warner’s historic performance in the men’s decathlon inspired his fellow athletes, and the whole country. His greatness over 10 events earned him the title of Flag Bearer for Team Canada at the closing ceremony, and the unofficial title of the ‘World’s Greatest Athlete’.

“Being named the Flag Bearer for this group of Team Canada athletes is a tremendous honour and an amazing way to cap what has been an unbelievable few days for me,” said Warner. “What each of us has gone through over the past 18 months to even get to these Games is what makes Tokyo 2020 all the more special.”

The team won six Olympic medals, two gold, one silver and three bronze. In a twist of fate, every Canadian athletics medallist was male, and they were the only medals won by male athletes of the 24 harvested by the Canadian Olympic Team in total.

For Andre De Grasse, it was a case of history repeating itself, plus a new chapter being written in the history books. For the second straight Games, De Grasse brought home three medals – one each in the 100 metres, 200 metres and 4×100-metre relay. He broke with history by winning his first Olympic gold medal in the 200 metres.

“I’m just proud – proud of this moment. I want everybody to know: I shocked the world. That’s what I came here to do. This is my moment. I knew I had it in me and I just wanted to come out here and get the job done,” said De Grasse following his 200-metre win.

Warner made a similar upgrade to the colour of his medal. After finishing fifth in London 2012 and earning bronze in Rio 2016, he set a new Olympic Record, scoring 9,018 points to secure his own gold medal.

Mohammed Ahmed came into Tokyo a bronze medallist in the 5,000 metres at the Doha 2019 World Athletics Championships and took another step forward with his silver-medal performance in Tokyo. “I’m elated. I was off the podium five years ago and it hasn’t been an easy five years for me. It’s been a lot of mental checks, a lot of doubt and uncertainty. I put a lot of work into this. That last 150 metres, that’s what I thought about,” said Ahmed post-race.

Evan Dunfee’s bronze medal in the 50-kilometre race walk came just in the nick of time. Dunfee famously was briefly awarded bronze in Rio before an appeal bumped him back down to fourth place. This time around, Dunfee made his move in the very last few metres of the race to score the bronze medal he had dreamed of. With the removal of the 50-kilometre race walk from the Olympic schedule, his late push was just in time.

The men’s 4×100-metre relay team of De Grasse, Aaron Brown, Jerome Blake and Brendon Rodney won bronze for the second Games in a row. “We came out of it with an Olympic medal for the second consecutive Olympics, so we’re proud of that achievement. This group of guys will be back, because we’re just going to get faster and stronger,” said Brown.

Record books were re-written in the Japanese capital, as the team registered new personal, Canadian and even Olympic records.

Geneviève Lalonde broke the women’s 3,000-metre steeplechase in her opening heat. Then she broke it again a few days later, setting the benchmark at 9:22.40 and earning Canada’s best-ever placing in the women’s event with an 11th place finish. Matthew Hughes set a new Canadian best placing in the men’s steeplechase with his sixth-place result.

Geneviève Lalonde just finished the 3,000-metre steeplechase in a NATIONAL RECORD time of 9:22.64, good for 4th place! She will wait to see if she qualifies for the final. Stay tuned!#ExperienceGreatness #Athletics #TeamCanada pic.twitter.com/XlGSu20VBl

“Anytime I get the chance to race against the best in the world, it’s an incredible opportunity,” said Lalonde following the 3,000-metre steeplechase final. “Being able to run my best, considering everything that’s going on in the world, I am just so lucky to be able to represent my country here and run two national records back-to-back.”

When Camryn Rogers finished fifth in the women’s hammer throw, she established a new Canadian best in that event. Competing in her first Games, the multiple NCAA champion looks to keep up the momentum, with Paris 2024 on the horizon.

De Grasse’s gold medal in the 200 metres was both a best finish in the event, but also set a new Canadian record time in the process (19.62 seconds). Ahmed’s silver medal was Canada’s best result in the 5,000 metres, as was Warner’s gold and Dunfee’s bronze.

The depth of the team was highlighted by 15 Top 8 placings, the best at a modern Games, placing Canada fifth on the overall athletics points table with 70 points, ahead of athletics powerhouses such as China, Great Britain, Australia and Germany. It was Canada’s best finish since 1928 when Canada placed fourth with 81 points, a feat that included four gold, two silver and two bronze medals.

“All of our superstars performed, the next generation of stars also showed their quality and will be hungry for the Paris Games in only three years. They can’t rest on their laurels, as others looked so comfortable in their first appearance at this level,” said Nathan

The women’s 4×400-metre relay team of Alicia Brown, Maddy Price, Kyra Constantine and Sage Watson pushed all the way to the line for fourth place, equalling their result from Rio. “I know all these ladies left it all on the track. I really wanted to bring home a medal. We got fourth in Rio, so I know how it feels – it hurts. I think the women in this track and field program just want to bring home a medal, just like the guys do. We’re getting so close and I promise Canada that we’re going to do it,” said Watson following relay.

Justyn Knight’s seventh-place result was noteworthy in the men’s 5,000-metre final, as was Django Lovett’s eighth-place finish in the men’s high jump.

The Olympic experience is more than just podiums, anthems and performances. History is not just statistics. History is stories passed down.

“The fighting spirit of the team, across every event group was just as pleasing,” said Nathan. “From John Gay’s motivational personal best on our first day in the Olympic Stadium, through to the sensational performance by our women’s 4×400-metre relay team on our last day in the stadium, athletes have demonstrated performance on demand.”

“The Canadian performances in athletics were so inspiring,” said marathon runner Malindi Elmore. “There were so many gutsy performances – some resulting in goals achieved and some not – but I know everyone went into their events giving it the best they could and that is inspiring.”

“I can’t possibly choose one performance. Within athletics, every single performance and medal we got was so well-deserved,” said Bishop-Nriagu. “Off the track, the women’s soccer and swim teams’ completely dominated.”

Team Canada is all of us

Without fans in the stands, athletes were faced with a very different atmosphere. But even without family and friends on site, the team felt the support of the entire country, even from thousands of kilometres away.

“Thank you to all the Canadians for the support and cheers. I knew how many people were back home supporting me and cheering for me and it really did make a difference in the last seven kilometres when I was starting to suffer. I knew my friends, family and fans were cheering me on, and I channeled that energy the best I could,” said Elmore.

“We felt your support all the way over in Japan,” said Bishop-Nriagu. “It was odd not to have fans in the stands, but everyone did a really great job staying connected and supportive at home.”

“Though I compete alone, I’ve never felt more support, not only from my coach, Gar, and our team, but from my community and everyone back home cheering us on. As a team, we had our respective challenges training through the pandemic and that collective experience will always be a part of our story. It is a journey that we can all be incredibly proud of,” said Warner.