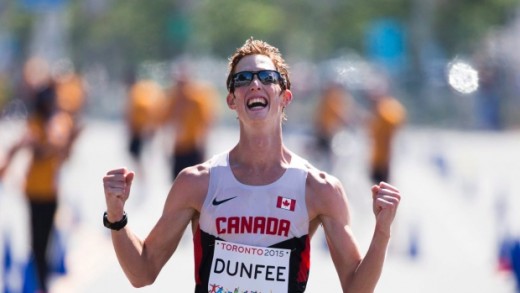 Canada’s Evan Dunfee earned the victory at the Australian 50-kilometre Road Walking Championships this weekend and set a new national record in the process.

Dunfee, from Richmond, B.C., finished first in three hours 43 minutes 45 seconds. He trimmed over four minutes off the previous national mark of 3:47:48 set by Marcel Jobin in 1981, nine years before Dunfee was born.

Dunfee’s time was the seventh-fastest in the world this year and was well inside the Canadian qualifying standard of 3:54:20 for the 2016 Rio Olympics. He also took over six minutes off the personal best he set at this year’s world championships in Beijing.

“I’m in really good shape, so I knew I was ready for a big one,” Dunfee said after Saturday’s race. “I wasn’t sure whether it would be a hard or fast race really, so I didn’t really make my decision until about three kilometres into the race and I thought I’d go for it. I’m really happy with it and it felt really good.