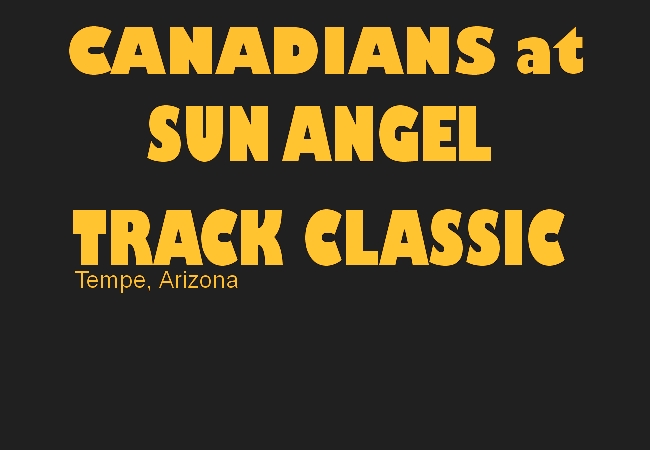 The road to the London Olympics began in earnest for Speed River Saturday in Tempe, Arizona. A group of seven athletes came down from a high altitude training camp in nearby Flagstaff for an early season test at the Arizona State Sun Angel Classic.

Hilary Stellingwerff kicked the action off with an outstanding third place finish in the women’s 800 metres.  Stellingwerff was part of a near blanket finish crossing the line in 2 minutes 2.94 seconds, a time that ranks her seventh in the world and is the third fastest performance of her lifetime.  Stellingwerff was racing down in distance and will shift to her primary focus the 1500 metres in two weeks time at the Mt. Sac Relays in Los Angeles.

Stellingwerff’s Speed River teammate Malindi Elmore captured the women’s 1500 metre title at the Sun Angel Classic with a time of 4 minutes 16.38 seconds. Elmore used a devastating kick to defeat a very strong field by over a second.  Steeplechaser Dana Buchanan was eighth in 4 minutes 21.73 seconds. Elmore will be looking to achieve Olympic standard in the 5000 metres at Mt Sac, while Buchanan will shift to the steeplechase.

In the men’s 1500 metres, Kyle Boorsma made his seasonal debut in a very strong 3 minutes 43.06 seconds, a performance that placed him fourth in the Premier race. Boorsma’s Speed River teammates Alex Genest and Chris Winter were eighth and 14th respectively, as both recorded lifetime bests.  Genest crossed the line in 3 minutes 47.06 seconds and Winter in 3 minutes 50.10 seconds. Boorsma will be racing the 5000 at Mt Sac, while Winter will be racing the steeplechase.  Genest who already has achieved Olympic A standard will race next at the Payton Jordan Invitational at the end of the month in Palo Alto, California.