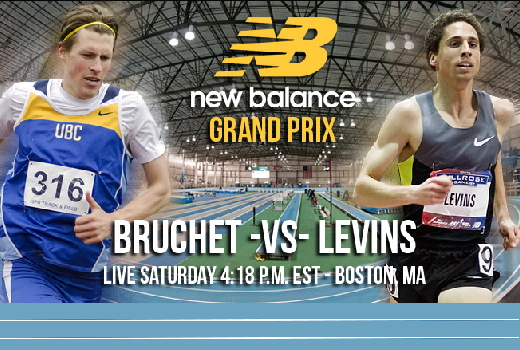 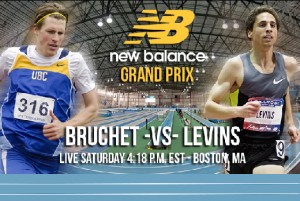 Vancouver’s Luc Bruchet is racing against fellow Canadian Cameron Levins Saturday, February 8th at the New Balance Indoor Grand Prix at Roxbury College in Boston, MASS. They will be contesting the 3000 metre distance against a strong field that also includes Kenya’s Sam Chelanga and several other competitive athletes. See the start list below.

Both Levins and Bruchet are running well for the first part of 2014. Bruchet is coming off of a win over American Evan Jager where he ran an indoor mile in the time of 3:57.71 for a new personal best, which he set February 1st at the Dempsey Indoor Meet in Seattle, WA. Two weeks before that the 24-year-old Levins broke the Canadian indoor 5000 metre record by running a 13:19.16 at the Boston University Multi-Team Meet on January 16th.

Levins’s indoor best is marginally better than Bruchet’s at 3:57.16 however; the gap between their 3000 and 5000 metre best times is larger. Levins has run as fast as 8:00.99 outdoors and indoors in 7:45.75, while Bruchet’s fastest is 8:08.77 outdoors. Expect both to run faster, Saturday. Bruchet told Athletics Illustrated, “My goal of the race is taking a shot at the world indoor standard, as well as getting out there and mixing it up. Regardless of the time I’m grateful for the experience,” said the twenty-three-year old. The IAAF World Indoor Track and Field Championships qualifying time is 7:50.00.

Levins said, “I am just looking to be competitive up front in this race. If the pace is fast enough, I would really like the Canadian record. However, I think that will happen if I execute good tactics and stay tough. I am going to have some fun, and see what happens!”  The Canadian record is currently held by legendary Kevin Sullivan of Brantford, Ontario and stands at 7:40.17.

Bruchet runs for the University of British Columbia under coach Marek Jedrzejek, he is also a member of the BC Endurance Project headed by Richard Lee, “In terms of fitness I think I’m pretty fit after the way the past two races have gone,” shared Bruchet.

Levins’s Alma mater is Southern Utah University; he run under Coach Eric Houle. Levins now runs for Nike with the famous Nike Oregon Project under Alberto Salazar. Levins competed in both the 5000 and 10,000 metre events at the 2012 London Olympic Games.

The race can be seen live at 4:18 PM EST at Trackie.ca