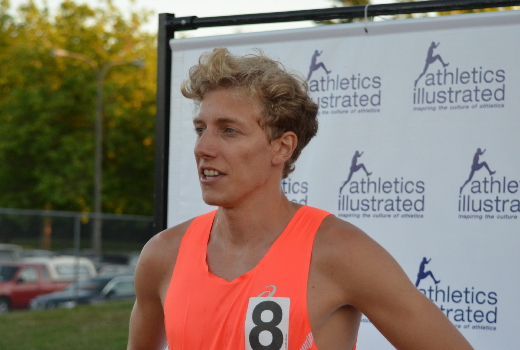 Canadian 1500m specialist Charles Philibert-Thiboutot won the B.A.A. 5K on Saturday. He won in the time of 13:35, which is a new Canadian road 5K record.

The Quebec City native took down Olympian Paul Williams’ record of 13:36 which was set in 1986 in Carlsbad, CA at the Carlsbad 5000.

“It’s always nice to get a win,” said the 2016 Canadian Olympian at 1500 meters. “It was a super fun race, too. I’ve been having my best workouts ever at altitude, and that doesn’t lie. I came down and I’m like, ‘you know what, I’m going to go for the win.’ I showed up to the front line with that confidence and I’m glad because it paid off.”

Philibert-Thiboutot set a new 28-second personal best and held off a late kick by New Zealand’s Geordie Beamish who settled for second place.

The University of Laval grad finished ahead of a rich field which included Beamish who took second place in the time of 13:36 and Zouhair Talbi of Morroco for third in 13:36 as well.

The top-three women were Senbere Tefere of Ethiopian for the win in 14:49. American Weini Kelati in 15:04 and the third-place finisher was Kenyan Sharon Lokedi clocking a 15:16 performance.

Teferi set a new B.A.A. 5K record in the process.

“My main goal was to break the world record, but I’m thinking it was a little bit windy,” said the two-time World Athletics Championships silver medalist, who came to Boston on the heels of a 1:07:34 win at last month’s NYC Half.  “I’m very happy to get the course record here.”