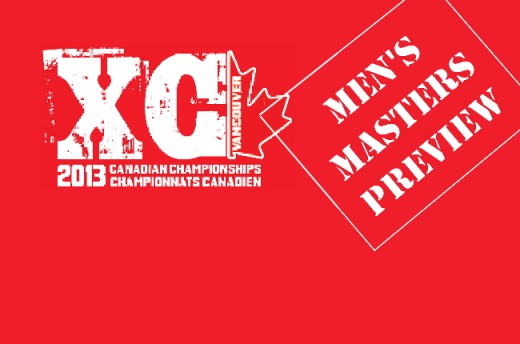 An exciting men’s master race will be taking place at Jericho Beach in Vancouver, November 30th at the Canadian Cross Country Championships. Several of Canada’s former elite athletes who are now over the age of 40 and 50 happen to remain in excellent form and will be battling for the national title starting at 10:00 AM on Saturday. They will compete over the two kilometre loop course for four laps completing a total of eight kilometres.

According to the International Association of Athletics Federations (IAAF) – the worldwide governing body of the sport, as well as Athletics Canada (AC), the national body, and the World Masters Association (WMA), masters age begins at 35, whereas amongst most athletes (the people doing the competing) 40 is the acknowledged age, as it was until 2006, where it was dropped officially to 35.

Steve Boyd, at age 50, finished ahead of all masters (over-35) during the 2012 Canadian Cross Country Championships. He is entered into the 2013 edition and if he is in the same fitness as last year, will be difficult to beat. Perhaps he will defeat some or all of the top-35-plus athletes, who plan to compete as “masters” this year – some of whom were not entered into the 2012 edition, let’s hope.

This rule was agreed upon by a majority to continue in 2011, and announced by César Moreno Bravo, a Council Member of the IAAF (and former 400m sprinter, where the age difference from 35 to 40 is likely much more apparent in performance than over long distances), that the IAAF Congress voted in favour of recovering Rule 141. Apparently the WMA supports the decision.

Oliver Utting, who on May 10th 2013, turned 40-years-of-age, will be difficult to beat, as he proved his fitness level at the 2013 GoodLife Fitness Victoria Marathon on Sunday, October 13th by finishing in 2:29:55. He will be one of or the youngest 40-plus athletes to compete on Saturday.

Two-time Olympian Bruce Deacon, age 46, will be competing. Deacon has also competed in three IAAF World Track and Field Championships. He is known primarily for his marathon success, having run 2:13 twice and 20 times under 2:20. Deacon’s form is looking good since he competed well during the 2013 BC 10000m Championships in Victoria, August 31st, finishing in 31:55.92 – a provincial 45-59 age-group record.

Fellow Victorian, Jim Finlayson, will toe-the-line. He is twice the Canadian Marathon Champion and has twice competed in the IAAF World Cross Country Championships. His 10km personal best is 29:21 and has competed consistently for over 22 years. At the 2013 BC 10000m Championships he won in 31:31.12.

Tyler Ginther won the 45-49 age-group at the BC Cross Country Championships by a fair margin and will be a challenger for a top position again at nationals.

Should Steve Boyd of Kingston, Ontario have competition in his 50-plus age category it should come from Vancouver’s, Norman Tinkham who handily won the BC Cross Country Championships by nearly two minutes.

The following are listed as registered at press time: