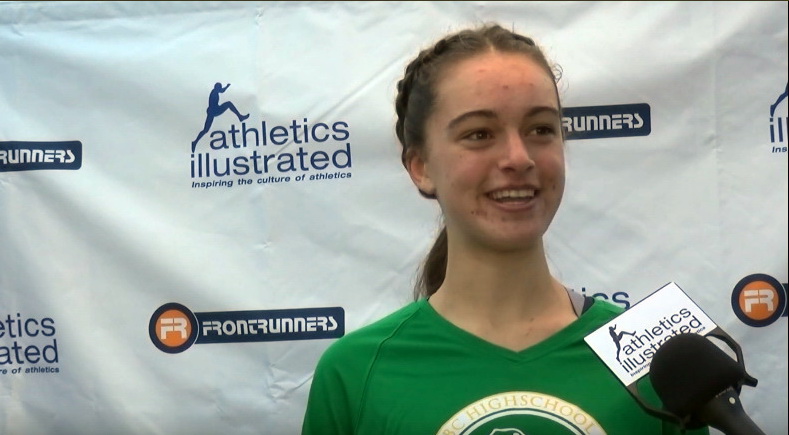 Reaching out to Christina Peet Williams, about flooding in her hometown of Chilliwack, BC, she replied, “our property is okay, but do you have access to a helicopter. There is no way out.”

The British Columbia coast had been hit days before and badly affected by a series of rainstorms. Environment Canada refers to the storms as Atmospheric Rivers. Chilliwack and nearby Abbotsford were cut off from the province as well as Greater Vancouver and Richmond where the airport is located. Under normal conditions, the drive from Chilliwack to Richmond takes 90 minutes.

On Wednesday, she said, “my flight leaves from Vancouver tomorrow and I have no way to get to the airport.”

Peet Williams earned her spot on Team BC to compete at the 2021 Canadian Cross Country Championships by finishing third at the provincial championships which were held in Saanich on Vancouver Island. It wasn’t the performance she was looking for. But the largely unknown Ruby Broadbent of Victoria surprised everyone with aggressive frontrunning from gun to tape, for the win.

Peet Williams did one better the following week when she finished second at the provincial high school championships in Vancouver at Jericho Beach. She closed the gap a little on Broadbent and raced tactically to overtake second place over the final km. The Chilliwack Secondary student kicked strongly as did third-place finisher Ella Ballard of Royal Bay Secondary on Vancouver Island who took third. The three finished in the times of 17:42, 18:20, and 18:22, respectively over the muddy 5K course.

“I have never been to Ottawa,” said Peet Williams after her high school’s race.

She was looking forward to her first national-level cross-country race. Having experienced the pandemic and the resulting cancellation of events in early 2021, she wanted to demonstrate her racing ability. She has heard from many universities in Canada’s USport league as well as the NCAA.

“I have not decided which school that I want to go to, yet.”

The environmental studies-interested 17-year-old says that a strong academic program will inform her decision as to where she goes to post-secondary school. Two front-running schools are the University of British Columbia, Okanagan in Kelowna, BC, which is led by head coach Malindi Elmore. Elmore is a two-time Olympian and the current national marathon record holder. The other school is the University of Victoria led by Hilary Stellingwerff, 2012 London Olympian. Both programs are good. It’s a tough choice. Kelowna offers small town and semi-desert conditions while Victoria offers island life in the temperate rain forest. Both are desirable. But the NCAA is not ruled out.

It’s ironic that it is the environment that was holding her back from getting to Ottawa.

At the 11th hour, her father arranged for Shawn Kumar who pilots for the Langley-based West Coast Pilot Club to fly her out. The club had been flying the area helping victims of the flooding. She was either in a Cessna or Piper Warrior prop plane when she sent the photo below.

The last time somebody not named Geneviève Lalonde won the ACXC women’s open title was in 2017.

The Moncton, N.B. native triumphed on Fort Henry’s foothills in Kingston in 2018, and then on Abbotsford’s twisty terrain in 2019, both times setting the tempo for much of the race. Now, one might expect the twice-defending ACXC champion to feel pressure as she prepares for Saturday’s championship in Ottawa Region’s Wesley Clover Parks. But for Lalonde, a cross-country veteran and two-time Olympian in the 3,000m steeplechase, competing is part of the fun.

“I have set the goal to enjoy the race. 10 km can be long, and if you aren’t having a good time it can be even longer, so why not make it enjoyable?” said the 30-year-old, who now lives and trains in Victoria, B.C.

Mike Tate does not have to venture farther than his own living room to remember that defending his national ACXC title will be no walk in the park.

Tate expects Bruchet to be back with a vengeance this year in the Ottawa region’s Wesley Clover Parks. Yet, the 26-year-old wonders if his roommates Connor Black or Phil Parrot-Migas, or another teammate like Jeremy Coughler or Jack Sheffar, all members of the London Western Track Club, pose the greatest threat to his title. After all, Black and Coughler got the best of him at the Athletics Ontario Championship in October.