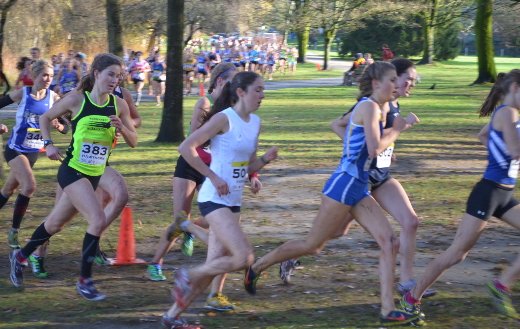 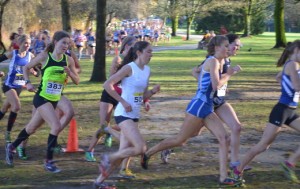 One of the more exciting races that will be happening at the Canadian Cross Country Championships on Saturday, November 29th in Vancouver may just be the junior women’s race. The field is full of talented returning runners. Based on birth year (95), roughly 35 of the top-50 finishers from 2013 will be returning, which bodes well for a very competitive 6K race that is scheduled to start at 11:45 AM PST.

Two of the favourites to win must be Ottawa’s Claire Smith and Victoriaville’s Jessy LaCourse. In the 2013 race they finished fourth and fifth, respectively. Now a year stronger, they also benefit as all three of the athletes that finished ahead of Smith in the 2013 edition now move up to the senior ranks. LaCourse is the 2014 Quebec junior champion.

Three runners that finished ahead of Smith in the 2014 Ontario championships (OFSAA) on November 1st,  that are listed as confirmed to race Saturday are Kingston, Ontario’s Branna MacDougall who finished first, Hannah Woodhouse who competes for Georgian Bay Secondary School, she finished second and Lucia Stafford of Toronto French School, who finished fourth.

MacDougall had a fantastic 2014 outdoor season where, as a grade 10 student, she broke the KASSAA (Kingston) 3,000m high school meet record with her winning time of 9:53.8. She attends Regiopolis – Notre Dame Catholic Secondary School.

Also in the top ten in the 2013 race, and returning this year are Regan Yee of the Bulkley Valley Athletic Club; she finished 8th and Sara Wismer of the Speed River Track and Field Club, who finished 10th. “We have three strong junior women Sarah Wismer, Rachyl MacPhail and Mackenzie Cameron,” said Speed River Track and Field Coach Chris Moulton, “Sarah made the world junior team in 2012 and was 10th last year.  Rachyl beat Sarah at the Wisconsin Invite and both girls are in very good shape. They were the 8th and 9th girls on our University of Guelph cross country team this fall.  Mackenzie was 14th last year as a 15-year-old.”

The championships include youth, junior, senior and master categories as well as a citizen’s non-championships event. Races start at 9:45 AM on Jericho Beach, first off will be the youth girls race, which will be 4K in length, followed by youth boys at 10:15. Full Schedule: