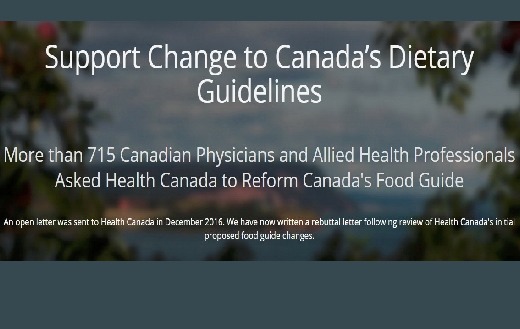 Below is a snippet from an open letter to the Office of Nutrition Policy and Promotion at the Laboratory Centre for Disease Control from at least 717 Canadian doctors and 2600 clinicians. It’s a rebuttal, to their efforts to continue to promote grains in the diet in the face of mounting evidence proving that sugar and other carbohydrates has led to a 40-year obesity and diabetes epidemic.

Coronary artery disease has also been linked to high carbohydrate living, although not directly pointed to below. There continues to be further research around the world with regards to Alzheimer’s, epilepsy and cancers as well as skin issues and mood and behaviors affected by the macro “nutrient”.

Dear Mr. Hutchinson, Dr. Philpott, and the Office of Nutrition Policy and Promotion;
During phase one of your public consultation on the new dietary guidelines, we submitted
an open letter on behalf of 190 Canadian physicians and allied health professionals
outlining our recommended changes to the food guide. Today we are submitting a revised
version of the letter, now signed by 717 physician and allied health professionals. We
actually represent a much larger group of approximately 2,600 Canadian clinicians, mostly
physicians, all whom are greatly concerned about the drastic deterioration in our nation’s
health over the last four decades of poor dietary advice. As such, we have been using food
as medicine to reverse disease.

We believe that our input, as doctors, is crucial for your committee to consider. Not only
are we on the frontlines of dealing with the epidemics of obesity and diabetes, but we
represent a group of doctors who have found a sustainable, evidence-based and
a groundbreaking way to successfully reverse these conditions through diet alone. If Canada
wants to begin reversing its epidemics of chronic diseases and restore the health of
Canadians using the most updated evidence available, authorities should at least hear the
testimony of doctors who are actually accomplishing that.

We would like to applaud you and your team for recognizing that sugar is a massive
problem in our population, especially for kids. We have reviewed the proposed changes to
the dietary guidelines; we believe that shifting the focus away from sugar and processed
food will have a dramatic impact on the incidence of obesity, diabetes and other nutritional
diseases. We also applaud the decision to start working towards legislation that would stop
the marketing of junk food to children. Rather than decide which food items are of concern,
we would encourage adopting the recommendations of the Canadian Heart and Stroke
Foundation, which are to eliminate the marketing of all food and beverage products to
children and youth under 17.

Although we see many positive and needed changes in your proposed guiding principles,

we feel that key critical areas are missing which should be addressed, specifically the
continued, perceived impact of saturated fats on cardiovascular risk, and the failure to
address the science demonstrating that high carbohydrate diets unfavorably impact
nutritional diseases. To issue guidelines which continue to caution against saturated fat
and which do not caution against excessive refined carbohydrates would be a tremendous
missed opportunity to give Canadians the advice they need to reverse our current
nutritional disease epidemic.

It appears that your committee remains focused on the perceived need to reduce saturated
fat. In the recent CBC report on food packaging planned by Health Canada (1), there was
report on front-of-package warnings for items containing sugar, salt and saturated fat.
While we absolutely agree with warnings on high-sugar items, we are greatly concerned
about the suggestion that warnings might be placed on nutrient dense whole dairy
products, such as full-fat cheese and yogurt. Sweetened yogurt should be cautioned based
on the sugar content, but unsweetened yogurt and other full-fat dairy products are not only
harmless, but very likely have a protective effect against heart disease (2, 3). One study
found that children are less likely to be obese later in life if they drink full-fat milk rather
than skim (4). This study showed a reduced incidence of Type 2 diabetes with increased
concentration of dairy fats (5). Numerous other studies have shown that higher dairy fat is
either associated with decreased obesity or is cardioprotective (6, 7, 8).