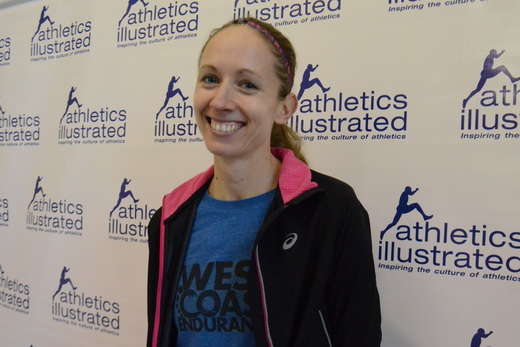 Athletics Canada re-released the highly anticipated qualification standards for the 2017 London IAAF World Track and Field Championships today. The marathon event may be the most affected by the new benchmarks.

The record has since been bettered by both Lanni Marchant who has run as fast as 2:28:00 and Krista DuChene with her 2:28:32 personal best.

The men‘s standard has been as fast as 2:11:28 for the 2012 London Olympics and 2013 IAAF World Track and Field Championships, which is one-minute and 19 seconds off of Jerome Drayton’s national record  from 1975.

The new standards are 2:19:00 for the men and 2:45 for the women. The window of opportunity to qualify for the championships started retroactively from January 1, 2016 and runs through to May 31, 2017. AC has announced that they will send a full team of athletes who qualify – up to three men and three women.

The new marathon standards reflect the International Association of Athletics Federations benchmarks for the event; an adjustment that Canadian athletes have been calling for, for years.

There are a few Canadian athletes currently capable of running the more difficult standards. There are several more that can run the IAAF standards or better. Having the softer standards will allow athletes to fill out the teams and get international experience.

Nanaimo’s Erin Burrett for example has run two marathons, winning her debut in Victoria in the time of 2:39:17 in October 2015, and then she ran a 2:37:50 in Rotterdam in April 2016. Currently she is the fifth fastest eligible Canadian.

Burrett told Athletics Illustrated, “I’m happy that Canada is finally using the IAAF standards and has promised to send a full team. It shows a promising future for Canadian marathoners. No longer are standards set where athletes practically have to run a Canadian record to qualify. Not only the time change, but extending the qualification period back to normal length. I personally think this is a really good thing and look forward to battling it out for one of those spots.”

After the Rio Olympic Games, Athletics Canada consulted with Canadian athletes and other stakeholders in the direction that the governing body was going. As a result, the national Head Coach Peter Eriksson was relieved of his duties.

Eriksson told Athletics Illustrated, when the previous 2017 IAAF Standards were announced, “The standard set by the IAAF (2:19 and 2:45) is not an internationally competitive standard and we are selecting athletes to perform internationally and our intent is not just to fill the quota in major championships – we have the same expectation for all events.”

Burrett added, “AC did a good job of discussing these changes with Canadian marathoners well before making them official, so that we could efficiently plan our spring races.”

Asked why the move to the IAAF standards AC’s CEO Rob Guy responded, “The IAAF is the governing body, most countries use them, why not us? This way, it’s in the hands of the athletes, not administrators.”

“I hope so. It’s up to the athletes. They need to get their standards and then in most cases perform well at nationals,” Guy added, when asked if the new standards will help fill the team.

Asked of his opinion of the previous performance standards, Toronto race director Alan Brookes said, “I think the marathon standards for London 2017 are very disappointing and disrespectful, both from a timing and content point of view. They also show a profound lack of understanding of the marathon event. They are discouraging and de-motivational — exactly the opposite of how we should be treating our athletes to develop the quality and depth in Canadian marathoning. I hope that Athletics Canada will re-visit the situation and give the standards the time and thoughtful consideration the athletes deserve.”

Burrett is expecting to race the Rotterdam Marathon in April to further improve her time.

“Currently I sit fifth in the country, so I will try to improve that this spring.”

Rachel Hannah of Toronto has competed in the Toronto Pan Am Games in the marathon distance. She owns a personal best of 2:32:09 from Houston 2016. She sees the new benchmarks as an opportunity to grow interest in the sport that has been viewed as too difficult to achieve.

“The new standards will fuel more possibility for athletes to train post-university and see the potential of racing for Canada,” said Hannah. “I expect this will likely increase participation in elite Canadian marathoning and will only elevate our performances at the international level.”

Hannah echoes Burrett’s comment of the governing body’s effort to engage the athletes in the process.

“Athletics Canada has been very supportive on getting feedback and discussing how to grow the marathon amongst domestic elites. I am very thankful for their support and openness.”

For Trevor Hofbauer of Calgary, who does not compete over the distance at this time, he also sees it as an opportunity for future athletes, “the new standards encourage participation in the marathon from athletes that have been pondering the jump and it allows other (non-Olympic) athletes to qualify for an international team. Athletes that are aiming for the 2020 Olympics will benefit from this opportunity to race internationally.”

Although he didn’t say it, perhaps in the future Hofbauer would be interested in running the marathon, this is probably less likely, if he would be required to run under 21:11:29 to make a Worlds team.

He added, “I like what AC has done with the marathon standard. The marathon cannot be run as frequently as other shorter events and there are more variables that come in play over the span of two-plus hours, so to see a more respectable standard will alleviate pre-race stress from athletes and it will allow them to run their own race, which could have been dictated by a difficult standard previously.”

It could be argued that Canada’s recent improvement in marathon depth has to do with the tougher standards. At this time, for example, Burrett would only have to be faster than DuChene’s current qualifying time of 2:34:00 (versus a standard). In theory, the athletes can just compete against each other, versus chasing a standard.

In the men’s field, Reid Coolsaet and Eric Gillis have run faster than the standards on more than one occasion. Coolsaet’s lifetime best is 2:10:28 from Berlin in 2015, while his current best is 2:10:55 from Fukuoka 2016. Coolseat is the all-time most consistent Canadian marathon runner.

Consider Jonathan Brown, who twice finished fourth in the Olympic marathon. He would not have qualified with the 2:11:29 standard during the latter part of his career, while he was representing Canada. He owns bests of 2:09:31 and 2:09:44.

It has yet to be proven that athletes would run slower with the softer standards, but AC’s move to the IAAF benchmarks is likely to invite more Canadians to move up to the marathon distance. Perhaps it will delay the retirement of others, for example two-time 2:13 marathon runner Rob Watson, who retired in 2016. He competed hard to better the international standards, but did not qualify – his bests are nearly four minutes faster than the 2:19:00 standard published today.