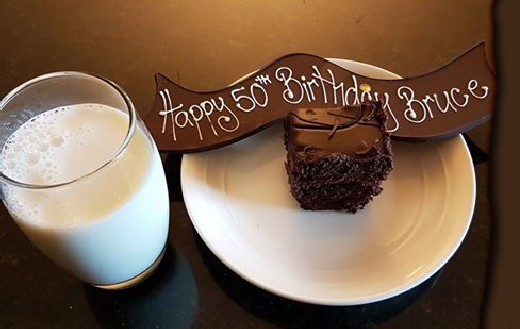 Abridged and edited from original that appeared in Victoria Sports News, Dec, 3, 2016

These days he can be found running through the trails of Greater Victoria, usually with a crew of teenage athletes in-tow. He leads the Prairie Inn Harriers Youth Team as their manager and coach, it is his brainchild; he founded PIHYT and then quickly acquired community, corporate and club support for the program.

At races, it is easy to pick out a member of Deacon’s clan as he chose the horizontal striped English-harrier-style singlets for the kids to race in. The look proved to be so popular that the club – the biggest club in all of Canada with over 800 members – started to wear them too.

They are the cool kids at the races.

As a kid himself, Deacon found running because he prayed for the opportunity to find a sport that he could beat the big kids in; everyone was big.

“I was one of the shortest kids in my school and really uncoordinated, said Deacon. “I was the kid who rushed for the outfield in gym class because I knew that no one could hit the ball that far and so I wouldn’t embarrass myself. I was not an athlete. In fact, if they had a vote in my school for the least likely to ever be an Olympian, I would have voted for myself.”

That self-doubt turned to confidence as he soon discovered distance running at a summer camp that was led by future Calgary Marathon champion and Frontrunners Footwear store owner Rob Reid.

He once told me, “I wasn’t last in my first races, but I was close enough to last to convince myself that longer distances, like the marathon, might be where I could best achieve a bit of sporting success. So, I did two marathons when I was 12. I would have done more, but for Bill Rodgers. I was a HUGE fan, and wrote him to tell him that I was running marathons. He was kind enough to write back, and wise enough to steer me towards track.” 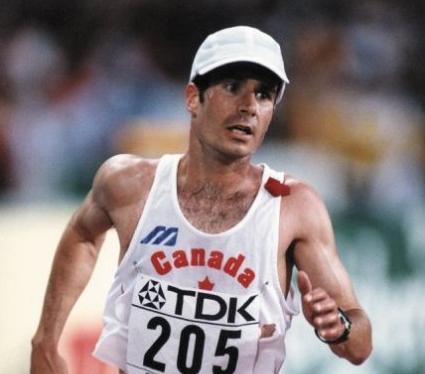 Deacon ended up seriously doing the marathon later and found success. He placed a very respectable 11th and 16th at the 1997 and 1995 IAAF World Track and Field Championships and competed four times in the event. He won silver at the 2003 Pan American Games and  is the only one to win the California International Marathon three times, once in a storm, besting Kenyan, Elly Rono (who owns a personal best time of 2:10:57) and he won another CIM in oppressive heat. Additionally, he has run at or under the 2:20:00 barrier over 20 times, with a personal best of 2:13, twice. He is also a two-time Olympian.

At 50, he continues to run and keep quite fit. At cross-country, never his forte, with his bouncing style, he can still put the scare into local masters. On the roads he continues to run well over shorter distances, for example at the age of 48, he ran the Bazan Bay 5K in the time of 15:51.

He has been married to Rosemary for nearly 21 years. They have two sons who also enjoy running Rob is 17, while John is 14.

“He doesn’t sit still well, he needs to constantly move and create” shared Rosemary. “He’s really a visionary at heart and is at his best when he can create something or help people.”

Apparently he loves to canoe. “Being from Ontario, Bruce is an excellent canoeist and his dream is to own a cedar strip canoe and to canoe the Bowron Lakes Circuit,” shared Rosemary. Bowron Lakes are located in the heart of the Cariboo Mountains in central, BC, pristine country that is known around the world for the circuit.

After retirement, Deacon was appointed to lead the Western office of the Canadian Olympic Committee in Vancouver. Under his guidance the office took care of the COC’s education program and community relations west of Toronto. His primary responsibility was the Canadian Olympic School Program, which provided Olympic-themed classroom activities for close to one million students.

Months later he had to correct that statement, “you may adjust the Canadian School Program numbers from 52,000 to 65,000. When we spoke, we were gaining upwards of 1500 new members/day…no kidding, it was crazy.”

These days what’s more important to him is how the kids he is coaching are doing. The results are stunning; he has turned out to be an effective coach too.

Liam Stanley competed in the 2016 Rio Paralympic Games and won a silver medal in the 1500-metre distance.

Kalum Delaney won the 2015 Junior Boys Vancouver Island Cross Country Championships – a regional event, then went onto virtually tie for first (credited with second) at the provincial championships in Nanaimo).

Deacon, doesn’t just plan his athlete’s workouts for them or order team singlets, he does a whole lot more. For example he started a successful Youth Endurance Camp, which he has put on two years in a row. He has brought out the likes of Olympians Cameron Levins, Hilary Stellingwerff, Lynn Kanuka as well as top coaches  like Heather Henniger of Athletics Canada’s West Hub and Canadian sport physiologist Trent Stellingwerff, to name a few.

He put on a silent auction at a local pub that raised money for a competitive trip – he took the kids to New York to compete in indoors. The northeast of the U.S. may be the mecca for indoor racing.

Not everyone wins every race that they compete in, but his entire team appreciates his hard work and dedication to the kids and the sport.

“Bruce is an amazing coach, not only because of his welcoming, dedicated and has a positive attitude, also, because he genuinely cares,” shared Bridget Cameron, one of his athletes.

“He cares about every single athlete who comes out to practice. Whether you are a beginner, the top runner in the country, injured or not having a great season, he is by your side, leading the way to victory.”

Cameron believes that his primary goal is to inspire running success, “…and happiness and safety in the minds and hearts of individuals,” she added.

Tyler Dozzi came to him two years ago at age 15 from Terrace, BC, a semi-remote northern town that is snow-bound most of the winter. His improvement has been nothing short of spectacular. During the 2016 cross-country season alone, Dozzi won the Island High School Championships, followed by the provincial club championships one week later, the week after that he took the provincial high school championships in Kelowna, in dramatic fashion. Saturday, November 26 for the first time he became a national champion at the Athletics Canada national club championships.

After his high school provincial championships title, Dozzi said. “I owe everything I have accomplished in running to Bruce. Ever since I have moved to Victoria, I have seen excellent improvements in my fitness. It’s really paying off right now and it’s a great group that we have.”