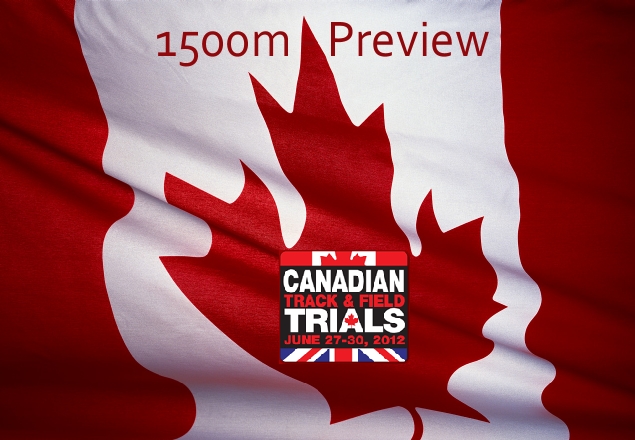 The Canadian Olympic Track and Field Trials start June 27th and finish June 30th. They take place in Calgary, Alberta and are viewable on CBC, on the final day of competition, and are being streamed throughout the competition at cbc.ca.

The 1500m men’s and women’s races will likely provide some exciting competition, as several athlete’s Olympic dreams ride completely on their performances at this meet. The pressure is now very much on. In both fields there are those who need to meet Canada’s top standard time and finish in the first three positions – meaning they have to have a heck of a race at this event – to qualify. The meet is located at semi-altitude at 1139 metres or 3740 feet above sea level, which provides implications of its own. And there are those that have already met Canada’s A+ Standard and now, in Calgary, simply need to finish top three.

Speed River’s Hilary Stellingwerff was leading the country for all of three weeks with her 1500m personal best and Canadian “A” standard time of 4:05.08 that she ran in Rome on May 31st. Less than a month later, on June 20th Nicole Sifuentes ran an outstanding race in San Diego, finishing in 4:04.70. According to Athletics Canada’s criteria, Sifuentes does not need a “repeat performance”. These two may be pulled to a fast effort by Malindi Elmore and Sheila Reid.

Malindi Elmore, who is from Calgary and now resides in Kelowna, BC comes to the meet with the “B” standard and is seeded third with her 4:07.90. Elmore is an experienced international athlete with a very strong resume, which includes her personal best time of 4:02.64. Elmore will need to have an outstanding performance to get on the team.

Sheila Reid of Toronto, Ontario has had a fantastic collegiate career, running for Villanova University. Her 4:07.77 personal best time was achieved at the same meet and in the same race as Nicole Sifuentes’s personal best performance that happened on June 20th in San Diego. Reid and Elmore may put on a show in this last chance Trials meet, in their efforts to qualify for the London Games.

Although the Trials website indicates that there could be up to 34 competitors at this distance, the potential list of contenders are rounded out by Carmen Douma-Hussar with her seed time of 4:11.20 however, like Elmore has an outstanding resume and a personal best of 4:02.29. Kate Van Buskirk with her 4:12.28, Julie Kawamoto and Karine Belleau-Béliveau may also be in the mix. The women’s 1500m race should be very exciting.

Cambridge, Ontario’s Nathan Brannen has run 3:34.22, which is faster than the A-standard of 3:35.50 and leads the country. He simply needs to finish top-three in Calgary, which shouldn’t be an issue. However, right behind him are two athletes who have not had the seasons that they had hoped for this year and will need to put on exceptional performances to make the Canadian Olympic team. Taylor Milne with Speed River Track Club is seeded second with his time of 3:36.71 this season. He has run slightly faster with his 3:36.00 from 2008. He will need to compete with Prince George’s Geoff Martinson. Martinson’s personal best time of 3:37.56 was run in 2011 at the Harry Jerome Track Classic in Burnaby, BC. The latter two athletes should make the finish of this race very exciting.

Speed River’s Kyle Boorsma is in the mix. He comes to the meet with a sub-3:40 as does Phoenix Running Club’s Matthew Lincoln. There are a total of five athletes with personal bests that are sub-3:42, including Peter Corrigan and Justin Marpole-Bird who round out the top 1500m runners.