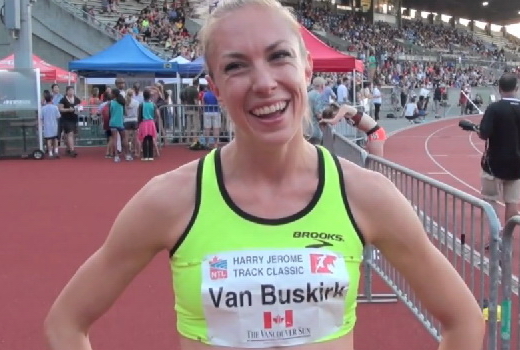 The Canadian Track and Field Championships are taking place this week n Edmonton, starting on July 2nd and wrapping up on July 5th. Canadians who are wishing to qualify to compete in this summer’s IAAF World Track and Field Championships taking place in Beijing, China starting August 22nd and finishing on August 30th will need to finish top-three and if they haven’t already they will need to run under the qualification standard in their respective event.

Edmonton plays host to three major track and field meets this spring and summer including hosting a National Track League event, Pan Am Junior Games and the national championships for both junior and senior athletes. Edmonton have dubbed themselves TrackTown, Canada.

One of the more intriguing events will be the women’s 1500-metre race, which will include three of Canada’s faster runners for the distance: Winnipeg’s Nicole Sifuentes, Brampton’s Kate Van Buskirk, Toronto’s Sheila Reid as well as Sasha Gollish also of Toronto – a 33-year-old triathlete.

Unfortunately 2012 London Olympian Hilary Stellingwerff of Victoria is on the sidelines with a stress fracture at this time.

Van Buskirk is the defending champion. Although she has had a challenging 2015, dealing with injury, she believes she is starting to round into form and is looking forward to Edmonton.

She had the kind of year in 2014 where it appeared that everything went well including winning a bronze medal at the Glasgow Commonwealth Games, winning the national championships in Moncton and setting her lifetime personal best of 4:05.38 in Belgium.

Van Buskirk told Athletics Illustrated, “Overall, I’m feeling good about Nationals. This has been a challenging year, both health-wise and with regards to some other environmental changes. But I’ve been coming into form over the last several weeks and feel really positive about the work that my support team and I have put in. I’m looking forward to toeing the line with Canada’s best in Edmonton and just really enjoying the competitive opportunity.”

Although her spring hasn’t gone as expected, she has demonstrated, that she is not too far away from mixing it up with the top Canadian athletes, for example on June 8th she ran the Harry Jerome Track Classic in Vancouver to third position in 4:09.48 behind Gollish and American Sarah Brown, who finished in 4:09.22 and 4:07.67, respectively.

“Finding a way to appreciate and enjoy the process is especially hard when things aren’t going the way you want them to, but I’ve been really trying to reconnect with the aspects of training and racing that I love and that keep me motivated through the successes and failures. My community is a huge part of this, and I’ll be racing for them next weekend,” she added. 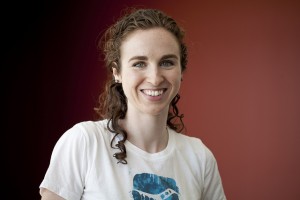 where she finished in the time of 4:07.61. Her personal best is a 4:04.65 (outdoors). “I’m excited and happy as I get ready for nationals. After a slow start to the season, I’ve just come off two season bests in a row and I’m building momentum. I’ve never enjoyed running as much as I do right now. I am looking forward to a great race in a great field,” shared the 28-year-old (she will be 29 on June 30th).

Sasha Gollis is an interesting athlete in this event as she is a triathlete who happens to possess middle-distance speed. Her personal best is 4:07.08, which she set in London, Ontario in June of 2015. Perhaps her 1500m potential has not yet been fully explored. On June 10th she ran the 800m distance in the Victoria International Track Classic and finished in the time of 2:02.90, which is less than two seconds off of the qualification standard to compete in the world championships.

Sheila Reid, after graduating from Villanova University in 2011 as the NCAA Division 1 champion in cross-country as well as in track in the 5,000m and 1500m distances was thought to be Canada’s next star of middle and long-distance track. She still has plenty of time to make that happen; however, she has had a rough couple of years with injury. She appears to be making a comeback at this time. The Toronto native’s season best is 4:09.14. Her personal best is a world-class time of 4:02.96. 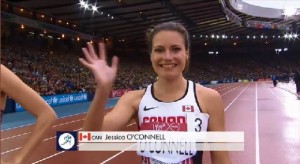 Jessica O’Connell is having her best season to date. During 2015, so far, she had run at least five new lifetime personal bests in the 1500m indoors, 3,000m indoors and outdoors and 5,000m. She set an eye-popping personal best in the 5,000m distance at the Payton Jordan Invitational finishing in the time of 15:06.44. Her 4:11.84 best outdoor time for the 1500m was set in 2014. Although her middle-distance times put her on the outside looking in, her 5,000m speaks otherwise. It will be interesting to see if she can mix it up with Canada’s best over the shorter distance.

Scotland’s Sarah Inglis is in the competition. She currently lives in Vancouver and attends Trinity Western University. She is coached by Mark Bomba, who recently made headlines with athlete Fiona Benson who became just the fifth Canadian all-time to eclipse the two-minute barrier in the 800m distance and running four big personal bests in a two-week span of time, down to 1:59.94.

Inglis’s best is 4:12.99. Although also on the periphery, she is in the shape of her life at this time and Coach Bomba suggests if the race conditions work in her favour, she could medal at nationals, which suggest a jaw-dropping personal best time, as none of the Canadian athletes have run under the world championships standard this year and will need to do exactly that in Edmonton – the women’s 1500m should prove to be a very exciting event to watch.

The entire nationals can be streamed live by AthleticsCanada.tv, here.