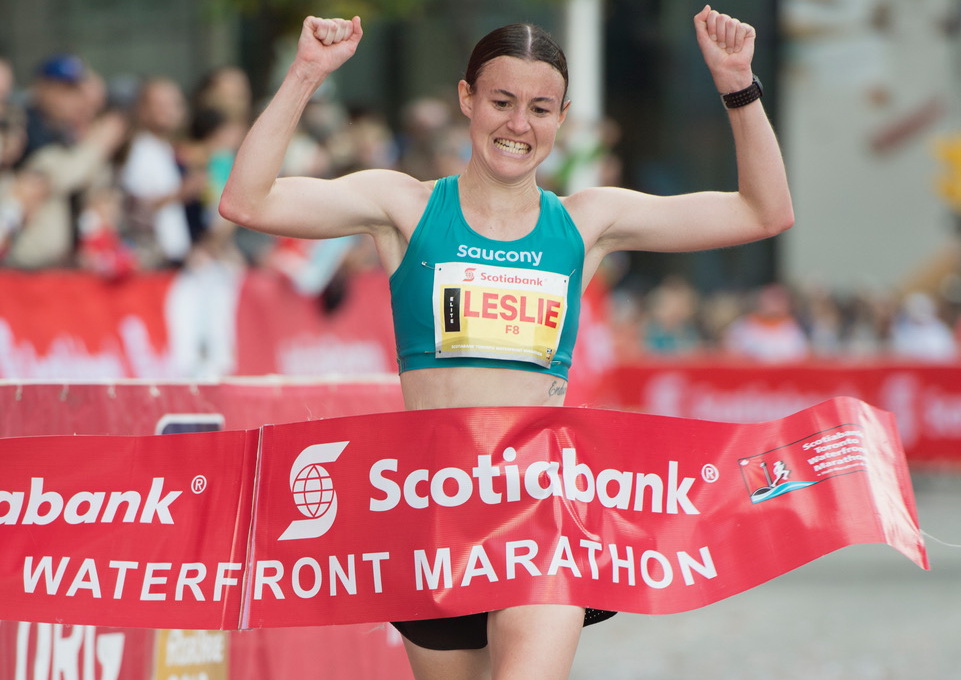 Leslie Sexton returns to the Scotiabank Toronto Waterfront Marathon on October 21st to defend the Canadian Championship title she earned a year ago. This IAAF Gold Label event will serve as Athletics Canada’s National Championship for the fourth consecutive year.

Although Sexton harbours no false illusions of challenging the stellar East African contingent near the front, improving her personal best and getting on that Canadian podium will be her primary objectives. The Canadian champion will earn CAD$5,000, if she runs 2:35:00 or faster, together with the gold medal.

“It’s definitely important,” she says of the Canadian title. “I guess I wouldn’t say it’s the ultimate focus. I want to go in just chasing a personal best and trying to run the best time I am capable of.

“I am still at the point where I want to run it evenly and smart. I can’t necessarily be looking for the win. If someone shows up, and they are a whole lot fitter, I am going to end up going out too fast. I want to be competitive in the championship and place well but my most important goal will be to run a personal best and just get a little bit faster over the next few marathons.”

The 2:35:47 she recorded to win the 2017 Canadian title earned her an additional $4,000 for fifth place overall. Known for piling on the mileage during her buildup, typically over 200 kilometres a week, three years ago she ran her personal best of 2:33:23 on the Toronto Waterfront. Ultimately, she wants to join Lanni Marchant (Canadian record holder at 2:28:00), Krista DuChene, Silvia Ruegger, Jaqueline Gareau and Lioudmila Kortchaguina in the Canadian sub 2:30 class.

“(The 2:30 barrier) is definitely a goal over the long term,” Sexton, a native of London, Ontario reveals. “I want to chase a time that reflects my recent training. I think it would be nice to be a sub 2:30 marathoner; it’s something I want to do over the next three or four years.

“Certainly next year when Olympic qualifying starts I want to get myself into the low 2:30 or sub-2:30 shape twice in a year and line up and do the best I can in marathons. For this one (Toronto Waterfront) I am looking more of bridging the gap between my time now and a sub 2:30, and hopefully taking a minute or so off.”

Standing between Sexton and her title defense is the formidable 41-year-old Krista DuChene, who stunned the running world with her third-place finish at the Boston Marathon in April. Although she appears content with her personal best of 2:28:32 from the 2013 Scotiabank Toronto Waterfront Marathon, she doesn’t seem to be looking over her shoulder at the up and comers.

“It’s definitely a great thing for Canadian women in the sport to have it more and more competitive,” the 2016 Canadian Olympian allows.
“Definitely that would be one of my goals to become Canadian champion but, like I have said since the Olympics, it’s like the less emotional energy I put into (racing) the better I do and the more I enjoy the process the better it goes. Training is going well and hopefully, it will continue to go well. And the sky is always the limit, but I think I am happy to still be at the sport in a competitive way,” says Krista.

While Sexton and DuChene are experienced marathon runners, a great deal of interest will be turned towards the little-known Kinsey Middleton, who represented Canada at the 2018 IAAF World Half Marathon Championships in Valencia in March. Toronto Waterfront will signal the 25-year-old’s marathon debut.

After graduating from the University of Idaho she moved east to Michigan where she joined the Brooks Hanson Project before moving back to Idaho to train.

“I was born in Coeur de L’ Alene, Idaho,” she reveals. “My mom is Canadian and when my brother and I were born my mother and grandmother were adamant that we would get dual citizenship. So we had an amazing opportunity to be a dual citizen of the US and Canada.”

Middleton enjoyed success at shorter distances including a personal best 10,000m time of 32:33.8 recorded at the 2018 Portland Track Classic. She also ran a credible 1:12:30 at the Houston Half Marathon in January, which resulted in her receiving an invitation to run for Canada at the IAAF World Half Marathon Championships. The marathon, she understands, is a different challenge entirely.

“I am trying not to put too much pressure on the very first one. I want to have a really good experience because it is so unknown,” she declares. “I would love to run below the (World Championships) ‘A’ standard which I think is 2:37. Aside from that, it’s just how I feel on that day because it’s such a new event.

“From the 10k to the Half Marathon they get more comfortable as they get longer which is something that made me think that the marathon is a step in the right direction. But there is such a question mark because I have never done one before.”

Middleton chose Scotiabank Toronto Waterfront because it fits into her plans for an autumn marathon. She was also encouraged by Canadian 10,000m record holder, Natasha Wodak, who was a fellow Canadian team member in Valencia.

“I heard from Natasha Wodak that they really cater to Canadians and that it’s an awesome event,” she explains. “So that was definitely one of the reasons I wanted to run it. I do love racing and so much about the marathon is people are racing for time but when it is a Canadian Championships you are also racing for place so that really appealed to me as well. I couldn’t really pass it up.”

With this trio of talented Canadian women already confirmed this year’s fight for Canadian championships medals promises to be a classic.

For further information and entry to Scotiabank Toronto Waterfront Marathon see STWM.ca and connect with the hashtag #STWM.