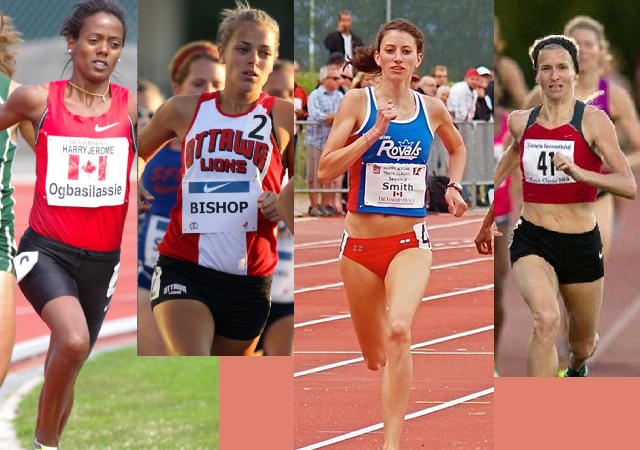 The Canadian Women’s 800m team will likely include the maximum three athletes that are permitted for each country, per event, at the 2012 London Olympic Games. The decision will come down to one fateful race that will happen at the Canadian Olympic Track and Field Trials in Calgary, Alberta, June 27th to June 30th.

Until this year, it had been assumed that just one and maybe a second athlete would run the required Canadian Olympic Standards in the women’s 800m event. Currently there are four athletes that have run better than the Canadian B-standard of 2:01.30 and two that have run faster than the A-standard of 1:59.90. The Canadian standards match the International Association of Athletics Federations (IAAF) standards.

Diane Cummins has been the lone competitor over the past three Olympiads in the 800m distance. She owns a personal best of 1:58.39, which is the current Canadian record. Cummins set the record over 11 years ago in Rieti on February 9th 2001. Cummins and Charmaine Crooks (1:58.52), until 2012, were the only Canadian 800m runners to best the 2:00 barrier, now there are four.

At the age of 38, Cummins continues to compete at a high level. She has bettered the Olympic B standard of 2:01.30 with her 2:01.11 performance in Vancouver at the Harry Jerome Track Classic, June 10, 2012. Cummins told the Times Colonist, “I remember racing against Charmaine Crooks in 1997 when I was young and thinking it was special and I hope this is special for these girls, as well.”

Twenty-five-year-old Lemlem Bereket (Ogbasilassie), has run slightly faster than Diane Cummins this season with her 2:00.82 personal best also at Harry Jerome. Bereket’s times have been progressing steadily and gradually over recent years, with the expectation of taking at least the B standard this year, as she works towards qualifying for the 2012 London Olympic Games. She has done that however, few expected Bereket to be surpassed by two other Canadians. She has said, “As part of this elite training group of dedicated coaches, support and athletes (in Victoria, BC), I am in the best training environment possible where I can maximize my performances in the 800m.”

Melissa Bishop of Windsor, Ontario is a 24-year-old student with a degree in Human Kinetics. Less than a year ago she stewed over the decision on whether to move onto graduate school or attack the Olympic dream. “School will always be there, but this is a once-in-a-lifetime opportunity,” said Bishop. Continuing to work with her University of Windsor coach Dennis Fairall, while training full-time, Bishop narrowly ran better than the A standard of 1:59.90 with her 1:59.89 at the Prefontaine Classic at Hayward Field, June 1st of this year.

North Vancouver’s Jessica Smith ran the fastest of this group with her run at the Harry Jerome Track Classic June 10th. Smith also narrowly eclipsed the A standard with her 1:59.86. Smith told the IAAF, “I’m kind of like, beyond belief right now. For days I’ve been like, ‘oh it’s coming on Sunday, that’s where I’ll do it.’ And to finally break that barrier, it’s incredible.”

It will all come down to one race where for two of the athletes time will be irrelevant, placing will mean everything. For Smith and Bishop they just need to finish in the top three to secure their place in the London Olympics. For Ogbasilassie and Cummins they need to run the A standard (break 1:59.90) as well as finish top three. The Canadian Track and Field Olympic Trials are taking place in Calgary between June 27th and June 30th.