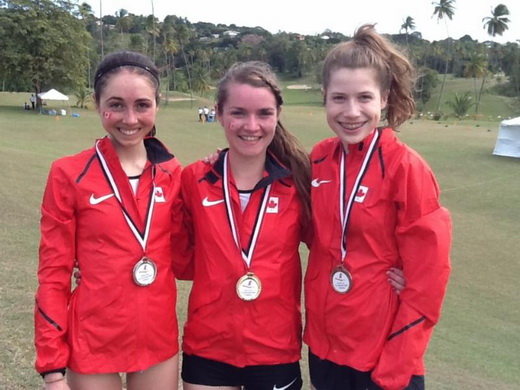 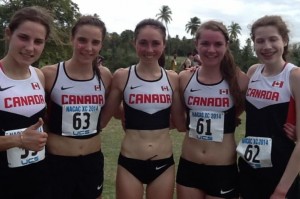 Most impressive were the Canadian Junior women who won team gold, with their first three finishers going 1-2-3, led by University of Michigan’s Jaimie Phelan from Kitchener, Ontario, who finished the four kilometre race in 13:38.93, while Stephenville, Newfoundland’s Jillian Forsey finished second in 13:39.91 and third was Claire Smith of Ottawa, Ontario with her finish time of 13:43.27. Smith competes for the Ottawa Lions, while Forsey attends West Virginia University. Rounding out the Canadian junior women are Aurilla Wilson and Jessy Lacourse.

Canadian senior women entered the event as the defending champions from 2013. They finished on the podium again, this time by earning a silver medal. Team gold went Team USA. The Canadians were led by Guelph, Ontario’s Rachel Hannah who finished the hilly and tough six kilometre course in 20:29.79, followed by Jessica O’Connell of Calgary, Alberta in 20:45.27 and Vancouver’s Sabrina Wilkie in 21:19.37. Tenth overall and fourth team counter was Nanaimo’s Erin Burrett who finished in 21:22.80, “It was hot, humid and hilly. The senior women went out somewhat conservative on the first loop and then things began to speed up. I honestly do not remember exact details of the race, but I did my best to hold on in the conditions,” said Burrett. Rounding out the senior Canadian women was London, Ontario’s Leslie Sexton in 12th position with her finish time of 22:38.42. Red Deer, Alberta’s Jodi Nesbitt collapsed with less than one kilometre remaining in the race due to what was believed to be dehydration and did not finish.

University of Michigan. Meanwhile Toronto, Ontario native Justyn Knight finished in fifth. The two battled hard at the Canadian championships on November, 30th 2013, with Knight prevailing, this time the results were reversed, “It was a good race. All of our athletes did well representing our country! The course was interesting because the majority of it was uphill! I found this race to be enjoyable, as I like a challenge,” said Knight. In eighth spot was Nova Scotian Mike Tate. Tate has followed in the footsteps of Cameron Levins by attending Southern Utah University. Tate was followed in by University of Victoria Vike Thomas Getty in 13th, Oshawa, Ontario’s Isaac Dobos, 14th and Miles Matthews in 18th. The 16-year-old Matthews hails from Windsor, Ontario. The junior men also raced six kilometres.

Barry Britt finished in 24:40.70. Britt attends Georgia State competing for the Vandals.  Second went to Kyle O’Neill who is from Vienna, Ontario and attends the University of Western Ontario, he finished in 25:00.96 and was sixth overall. Finishing third was Vancouver’s Theo Hunt, who

was followed in by Toronto’s Saheed Khan, who represents Central Toronto Athletic Club, while Ryan Cassidy, a New Brunswick native running for the University of Victoria Vikes, did not finish.