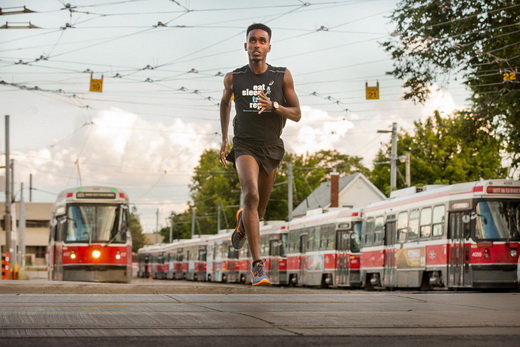 History will be made at this year’s Scotiabank Toronto Waterfront Marathon October 18th as the event will serve as the Canadian Marathon Championships for the very first time.

The race has also been honoured with IAAF Gold Label status joining Boston, New York and Chicago as the only marathons to enjoy such stature in The Americas.

Canadian citizens will be eligible for Canadian Championship prize money with the first domestic male and female runner earning $5,000 each – in addition to the open prize money. Medals are also at stake.

The fields are superb and with several athletes eyeing the Rio Olympic standards the Canadians are likely to battle each other while offering the foreign contingent all they can handle.

Leading the Canadian women is Lanni Marchant who set a national record of 2:28:00 here two years ago. She was third overall on that occasion earning $8,000 for her position and another $28,000 bonus for beating Sylvia Ruegger’s 28 year old record. Scotiabank has put up another $30,000 for a new record this year.

The 31 year old Marchant, who works part time as a criminal lawyer in Chattanooga, Tennessee, needs to run under 2:29:50 in order to be eligible for the Rio Olympics.

At present only Krista DuChene of Brantford, Ontario has the standard having raced to a 2:29:38 clocking at the Rotterdam Marathon this past April 12th. Unfortunately, DuChene will not be running Toronto having suffered a stress fracture of a metatarsal bone. She will, however, be on site as part of the “live” broadcast team for the race.

Marchant, who earned a Pan Am Games bronze medal in the 10,000m and also finished 18th in the IAAF World Championships 10,000m in Beijing announced her participation at a Toronto press luncheon earlier this month. She noted the strength of Canadian women’s distance running which has surged since 2012 when she and DuChene narrowly missed the Olympic standard.

“I don’t think Krista or I ever expected that we would help ignite a spark in women’s marathoning in Canada when we lined up at the 2012 Rotterdam Marathon,” she said. “We had some great ladies before us – obviously Sylvia but also Nicole Stephenson and Tara Quinn-smith. But women on the road hadn’t really gained the same following the men had.

“Now, just looking back over these years since 2012 we have seen more and more women line up and debut with some pretty amazing marathon performances. I think right now is the best time to be part of the Canadian running scene as there is such a charge of Canadian women absolutely killing it on the roads and I’m excited to see what will happen next.”

Marchant also said she doesn’t expect her record to stand nearly as long as Ruegger’s did. That record lasted twenty-eight years until Marchant and DuChene bettered it in Toronto. DuChene, a Brantford, Ontario resident, ran her personal best that day with 2:28:32.

Amongst those expected to challenge for medals are two female marathon debutants who have excelled on the roads in the Canada Running Series, Tarah McKay-Korir and Dayna Pidhoresky. The latter is finally healthy after several injuries and appears ready to perform to her potential. After all she ran an excellent 1:11:46 half marathon in 2011.

Another promising talent is Natasha Labeaud who debuted on the streets of Toronto a year ago finishing in 2:35:33. That earned her 8th place overall. She focused on 5,000m this past summer finishing 8th at the Pan Am Games.

Not to be forgotten is the 2014 Canadian marathon champion, Rhiannon Johns who, at the age of 23, ran cautiously to a 2:40:24 debut in Birmingham, Alabama. The fight for medal podium places is sure to be epic.

Thirty-five year old Eric Gillis will also be seeking the Rio Olympic standard and a berth on what could be his third Olympic team. The men’s standard is 2:12:50. Gillis represented Canada in the 10,000m in Beijing eight years ago and in the marathon in 2012. A year ago he raced to a new personal best of 2:11:21 in this race earning 9th place.

If everything goes according to plan Gillis will follow specially assigned pacemakers through 30 kilometres and defend the Canadian title he won a year ago in Ottawa. But should he falter both Kip Kangogo (2:15:35 PB) a Kenyan born resident of Lethbridge, Alberta, who acquired Canadian citizenship just a year ago, and Toronto’s Matt Loiselle could be there to claim his medal.

Though Loiselle’s personal best is just 2:16:01 he is determined to produce a great race when it counts.

“I have got up to about 30k at 2:12 pace. Both times that I ran the Scotiabank Toronto Waterfront Marathon I got to 30k at 2:12 flat pace. That’s when the pacemaker dropped out,” says Loiselle.

“If you look at my best half marathon time, which is under 1:04, I think it’s doable. I just believe in myself and I believe we will get good training in. And, it will help having Sami there too.”

“I am definitely aware of the Olympic standard,” says Jibril. “However, my goal for Toronto Waterfront, in my debut, is to run the best race I can and the rest will take care of itself.

“Matt and I do train three days a week when we can but not always, due to shift changes mainly on my part. However, we both have to do what we have to do in terms of getting miles in the legs. There is no short cut to a marathon.”

Competitive fields and a fast course await the entrants and when it is over will two new Canadian champions be crowned? The prospects of a memorable day are immense.