Several Canadians took in the 2016 Stanford Invitational track meet in Palo Alto, California on Friday, April 1st including many of the country’s Rio Olympic hopefuls. Personal bests and debuts at various distances made for an exciting meet.

Vancouver’s Maria Bernard representing Saucony finished fourth in the 3,000m steeplechase event with a finishing time of 9:59.31. Her personal best in the event happened at the Mt. Sac Relays last year, where she ran 9:53.71.

The top-three finishers were Harvard’s Paige Kouba who finished in 9:50.21, while Oiselle’s Mel Lawrence was hot on her heels finishing in 9:50.91, while Emily Oren representing Hillsdalem, just edged out Bernard with her 9:58.99 finishing time.

Robert McCann of  Mississauga won the men’s 3,000m steeplechase in the time of 8:47.35. He competes for the Drake University Bulldogs. Guelph’s Ben Preisner ran to sixth place with an 8:58.95 finish time. His career best is 8:53.14. Preisner attends the University of Tulsa.

The second place finisher was Nick Woolf of Cal Poly in 8:48.03 and third went to Forrest Shaffer of the Washington State Cougars who finished in 8:51.73.

Sasha Gollish of Toronto continues to improve; Friday she ran the 5,000-metre distance in the time of 15:35.45 for fourth place, which represents a new personal best. She finished one position behind Kiwi Olympic Marathon runner Kim Smith. The first place finisher was Dominique Scott who runs for the University of Arkansas Razorbacks and is from Cape Town, South Africa; she finished in the time of 15:25.09. Half a second back was Irish runner Mary Cullen, representing Brooks UK. Smith, who owns a personal best of 14:45.93 and is a three-time Olympian, finished third in 15:32.77. Cullen’s big year was in 2007, when most of her bests were set including her 5,000m pb of 15:19.04. She has been running well under 16-minutes for over 13 years.

“I’m really happy with my season opener. It’s tough to miss the Olympic Standard, but that was only my second 5000. It was a great learning experience, I learned a lot, I ran a lot faster than my 5000 last year (~27s faster) and I’m really looking forward to getting back out on the track again,” Shared Gollish.

Vancouver’s Erica Digby finished 16th in her debut at the distance with a solid  16:09.12. She was looking for a sub-16. Digby a former Idaho Vandal was coming off of a double win at the UBC Open, where she competed in the 800m and 1500m distances, leading both races from the gun.

Vancouver’s Rachel Cliff competed in the 10,000m event, it was her track debut running for the BC Endurance Project, however, she was listed as unattached. Cliff is known as a 5,000m specialist. Her best is 15:33.15 from the same meet last year. Friday she finished in the time of 32:38.83 for ninth place. According to the IAAF Scoring Tables, Cliff’s 10,000m performance is slightly better than her best 5,000m best, however, tactics, pacing and weather can influence results.

The winner of the race was Laura Thweatt of the Boulder Track Club. She finished in the time of 31:52.94, which represents a new personal best by 32 seconds and under the Rio Olympic standard of 32:15. She led from the gun and throughout the race.

The second place finisher was Alphine Bolton, who finished in 31:54.20. She was keeping the race close until there were just four laps to go and Thweatt, over that final mile, put a small amount of space between the two for the win.

During the women’s 1500m race, Canada had a few competitors including Erin Teschuk of Winnipeg who competes for the North Dakota State Bisons. She competed in the 2015 IAAF World Track and Field Championships in the steeplechase event. There was also 2014 Glasgow Commonwealth Games bronze medallist Kate Van Buskirk of Toronto and 2012 London Olympian Hilary Stellingwerff of Victoria. North Vancouver’s Jessica Smith, an 800m specialist competed, she too was a London Olympian. Also in the race was Vancouver’s Lindsay Butterworth.

Stellingwerff Tweeted, “Happy to get race season underway! Thankful to be feeling healthy and hungry and to race after injury and illness this winter; now off to Flag[staff]!”

Teschuk, defended her Stanford title and improved her own Bison’s school record by 1.80 seconds. Van Buskirk ran 4:15.65, and third place finisher Rebecca Tracy representing Oiselle crossed the line in 4:15.94. Stellingwerff finished in 4:16.09 and Butterworth, who runs for the Valley Royals and is a Simon Fraser University alum finished in 4:21.26.

In the men’s 1500m event Southern Utah University athlete Mike Tate, who hails from Heatherington, Nova Scotia finished third in the time of 3:44.80. Tate, who turned 21 on Friday, owns a personal best of 3:42.72.

Dan Gorman former Dalhousie University athlete competed in the first 1500m section, finishing 3:46.62 for seventh place. Gorman decided to take running seriously after graduating and has his eyes set on competing at the 2016 Rio Olympic Games. Gorman will need to run under 3:36.00 by or before the Edmonton Olympic selection trials taking place from July 7th to the 10th and will need to finish top-three at the event.

Jillian Forsey took in the second section of the 5,000m event. She is attending the University of West Virginia and is an All-American. She crossed the line in the time of 16:05.88 for 14th position. The 21-year-old from Kippens, Newfoundland owns a personal best from 2014 of 16:02.55, which she achieved later in the track season during July. The top-three finishers were Bethan Knights who finished in 15:52.91. Marisa Howard representing Oiselle was second in 15:54.06, while the third place finisher was Brenna Peloquin of Boise State crossed the line in the time of 15:55.43.

Twenty-year-old Knights competes for UCLA Berkley. Her personal best is 15:51.49. For an early April race, her performance Friday was one of her best at the distance.

Ottawa, Ontario’s Adam Palamar, who attends Syracuse University, raced the 5,000m event finishing in the time of 13:59.03 for 11th place achieving a new personal best. The top three finishers were Jeramy lkaim of the Oregon Ducks, who finished in the time of 13:47.40, while Colorado’s John Dressel crossed the line in 13:48.88 and Rorey Hunter representing Indiana finished in 13:50.09. 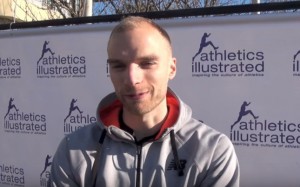 During the first section of the men’s 5,000m, Peter Corrigan, Ross Proudfoot and Chris Winter raced with Corrigan and Winter setting new personal best times for the distance. Corrigan who finished in seventh place improved his time by nearly two seconds. Previously his best was 13:44.63 from August last year. Friday he ran 13:42.88, while Proudfoot of Guelph finished in 13:51.47 and in 10th position. Last summer he set his current personal best in Europe with a 13:29.32 performance. Winter, one of Canada’s stronger 3,000m steeplechase specialists finished in 13:58.17 for 15th place.

“I’ve had shin splints/stress reaction type pain in my left tibia through the winter and so heading to Stanford, I was on four weeks of running and three weeks of workouts.” Said Proudfoot, a 23-year-old Speed River Track and Field Club athlete. “I always hope for the best and have been known to pull out surprise performances from time to time, so coming in I was still hoping to open in 13:45-ish. I wasn’t terribly far off of that on Friday, so I’m definitely happy with it. I think it was important for me to get on the line and feel out a race this early as after a month in Flagstaff I’ll be looking at some big races and be going for Olympic standard. Wouldn’t have been fitting to show up to Payton Jordan having the last 5,000m I had run be a pb from 9-10 months previous.”

Corrigan was also very happy with his race, “Race was really good. I felt really strong and in control the whole time.”

“Going into the race I didn’t really have much expectation. In talking with Wynn (Coach Gmitroski), my plan was just to race. I don’t have many 5,000s under my belt, and we just wanted to take advantage of getting into a good section and racing well. I feel like I accomplished that goal! That was tactically my best 5,000m ever, plus a two second PB, I can’t complain!”

When asked to describe the race, Corrigan added, “I have a tendency to get shot out that back at the start of races, so I wanted to get out strong. I ended up with the opposite problem and being in the lead, but only for a lap. I took it out kind of slow and after that two guys really took off, and another group of four went past and I stuck right on them. It actually ended up working perfectly, they were switching off leads and I got a free ride. At one point between the three and four km mark I let a little bit of separation happen. They actually caught up with the two guys who had really taken off somewhere around 2,000m to go. I worked hard and reconnected with about a mile to go and stuck back with the lead group until the last lap. I haven’t done any sharpening work yet, so when they really took off I wasn’t able to hang, but still closed in 61, which is decently solid.

I’m really happy with the race. It’s a great place to start off the season. Plus with a faster opening 800 and sharpening up, I’m confident I have a big PB in me. I’m excited to see what I can do after a month of altitude raining! I just have to hope I get into a good section at Payton Jordan!”

Winter was pleased, but not over the moon with his new personal best, “It wasn’t a home run but it was a decent result for this early in the year. I knew I could run under 14-minutes, but just didn’t know by how much. I was hoping for a bit of a quicker time but our first 800m was slow and that cost us a few seconds,” Said Winter. “Overall I am happy with my opener and looking forward to a good stint at altitude and opening up in the steeple at Payton Jordan.”

Full list of results from the meet are available: here.

Canadians wishing to compete in the 2016 Rio Olympic Games must compete in the 2016 National Olympic Trials taking place in Edmonton in July. The following text, from Athletics Canada’s selection criteria document explains how the top-two and a possible third athlete in their respective event may qualify for Rio:

4.1 All Events except Relays, Marathon, 10,000m, Race Walk and Combined Events Qualification System: The following steps will be followed until a maximum of 3 athletes have been nominated to the NTC in each event Automatic Qualification:

1. The top 2 finishers at the 2016 Canadian National Championships, provided they have achieved the necessary Qualifying Standard within the qualifying window for the event Additional Qualification:

1. The highest ranked* non-automatic qualifier who finishes in the top 8 or top half of their field (whichever is smaller) of their event at nationals having achieved the necessary Qualifying Standard within the qualifying window and has achieved their Competitive Readiness program may also be nominated for selection

2. If additional spots remain, nomination will be determined by the following order:
a. The next highest ranked* non-automatic qualifier who finishes in the top 8 or top half of their field (whichever is smaller) of their event at nationals having achieved the necessary Qualifying Standard within the qualifying window and has achieved their Competitive Readiness program may also be nominated for selection
b. Athletes with the Qualifying Standard within the qualifying period for their event may be included in the eligibility pool for nomination by the NTC at the sole discretion of the Head Coach **