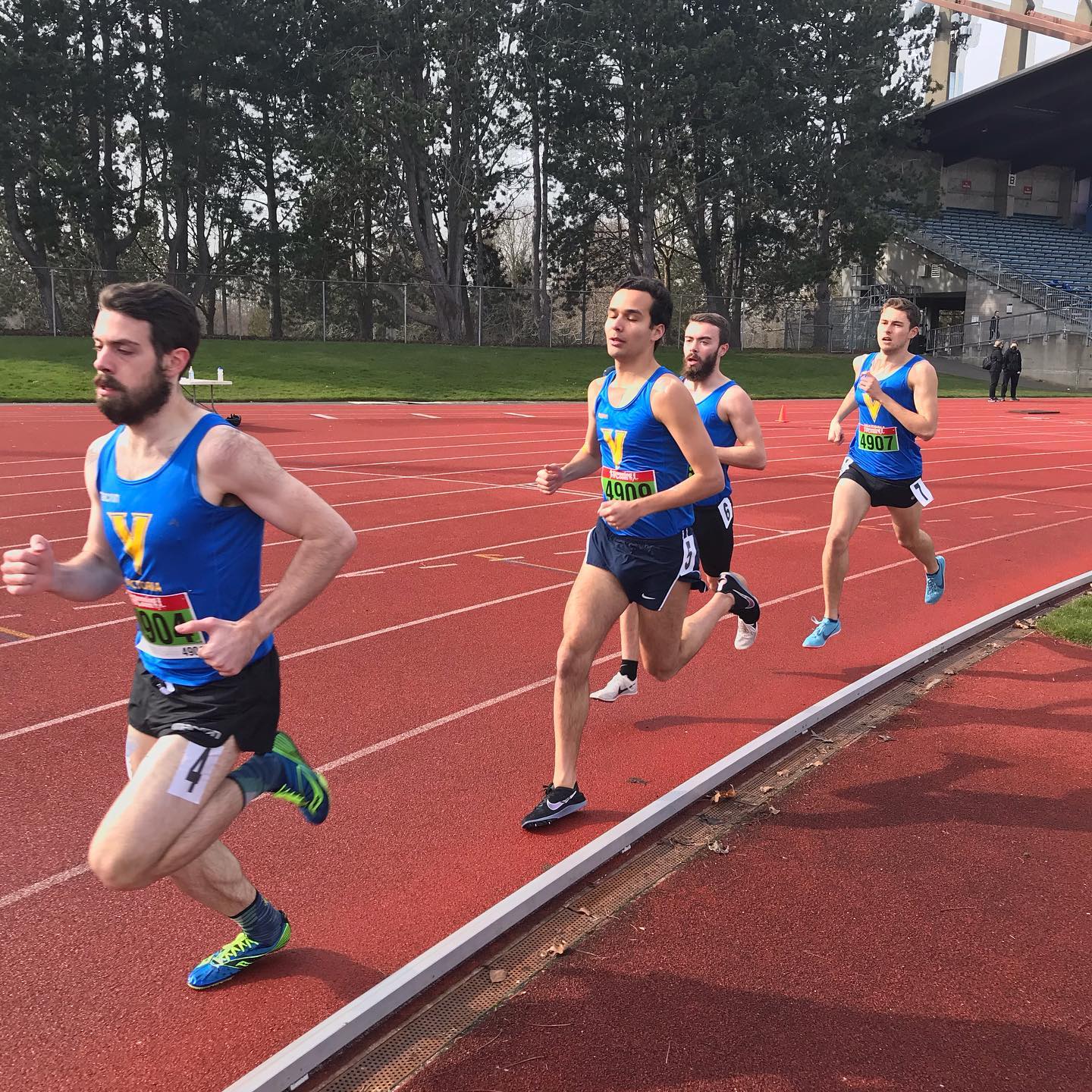 As widely reported, it has been difficult for elite Canadian athletes to find competition due to the pandemic. Canada’s strict rules on travel and safety protocols have been tougher than many other countries. And although none of the athletes are publically complaining, the government fumbling the vaccine rollout has put the athletes on their heels.

Saturday, the University of Victoria Vikes team that competes in USport took to their own Centennial Stadium to get in some early-season outdoor track racing. During the same evening, Athletics Canada’s West Hub fielded a number of local elite athletes. They competed under their club name Vic City Elite.

Media was strictly forbidden to be onsite at any time during the meet.

Erin Teschuck ran the 3000m in the time of 9:42.73, she finished solo as pacers dropped off. Hampered by the cool weather Teschuk was 30 seconds off her best performance which came in Göteborg, SWE in 2018 in the time of 9:12.75 — of course a late February race is early in the season.

Laurence Coté running for Vic City Elite clocked a 1:31.48 for the win over Olivia Romaniw and Angelina Shandro who finished in 1:34.28 and 1:43.61, respectively. Romaniw is the younger sister of 800m veteran Tony Romaniw who attended the University of Guelph and raced post-collegiate with the Speed River Track and Field Club.

Liam Stanley with the Prairie Inn Harriers and Nate Riech representing Vic City Elite went for an over-distance race supported by a bevy of Harrier pacers. Stanley is a 2016 Rio Paralympic silver medallist in the T37 1500m, while Riech is a 2019 IPC World Championships and Parapan American Games competitor as well as the 2019 Athletics Canada Ambulatory Athlete of the Year.

Former Team Canada member Peter Corrigan who helped put on the mini-meet told Athletics Illustrated by email, “We feel really lucky to have been able to put this event on for the athletes. Intra-squad time trials are great, but it doesn’t replace the feeling of putting on your full race kit with a bib and hip numbers and knowing you’re getting an official result. We were very lucky with the weather! It was a little chilly for the shorter events, but given that it’s February in Canada and we were running outdoors, the results were quite impressive!”

BC Athletics and their officials and Athletics Canada supported the meet.

“We would really like to thank them,” added Corrigan. “We look forward to meet #2 and #3 soon.

Natalia Hawthorn clocked a new personal best on the weekend running 32:37. Competing with her was Canadian marathon record holder Malindi Elmore (2:24:50, Houston, 2020) from Kelowna and Regan Yee of Langley. The final results will be certified official, however, the unofficial results are Hawthorn for the personal best in 32:37, Elmore 33:01 and Yee 33:16. Hawthorn’s previous best was 32:59 from Nov. 2020 run in nearby Abbotsford.

The three athletes started at roughly 3:15 pace and hung on through 7K before the split began.

According to Hawthorn’s Strava data, she ran nine of her 10 splits from 3:19 down to 3:13 with the final being 3:04. Four were run at 3:16. The course is in the Glen Valley Regional Park in Langley, just outside of Vancouver. The weather was cool and the season is early — the three efforts were strong performances.

According to her coach Chris Johnson, well-planned aerobic development has been key to her steady improvements. “We’ve carefully built her weekly training volume over the past few years,” he said. “We used to rely on cross-training quite a bit due to injury issues but we’re at the point now where she’s able to run pretty much daily. She doubles twice a week and her weekly long run ranges from 22-25km. We have one workout per week that is primarily aerobic in nature (tempo runs or long intervals at 10km pace) but we still keep speed development and race pace in play at all times.”