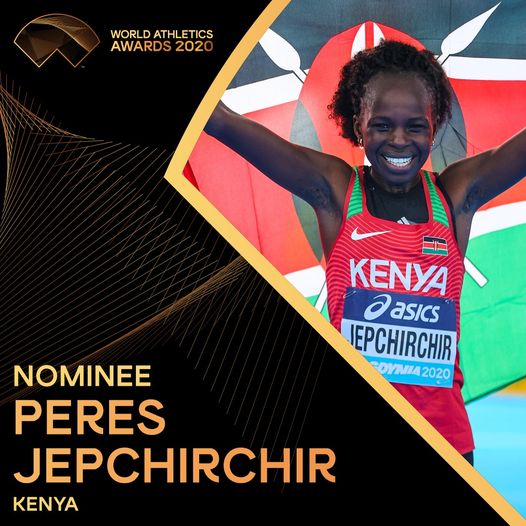 Throngs met Peres Jepchirchir at the Eldoret International Airport, as she deplaned on Thursday. It was a warm and boisterous welcome home for the 28-year-old Olympic gold medallist. She has run herself one of the all-time great years in athletics for Kenya.

Part of the welcome home at the airport was a large crowd of well-wishers made up by Athletics Kenya officials and staff, fellow athletes, coaches, administrators, many fans and family and friends.

The “year” started in October of 2020 when she set her second women’s only world half-marathon in Gdynia, Poland in the time of 65:16, it was also her second world marathon championships gold medal. Two months later, she won the Valencia Marathon in the time of 2:17:06, which is the fifth-fastest performance all-time.

After Gydnia, she Athletics Illustrated, “I would like to run personal bests in all distances in 2021, win the Valencia Marathon and compete for Kenya in the marathon at the Olympics.”

She certainly competed well at the Olympic Games, winning the gold medal on a hot day in Sapporo. She defeated fellow Kenyan and world record holder Brigid Kosgei (2:14:04), as well as surprise bronze medallist Molly Seidel of the US.

To turn around her training in time for the New York City Marathon on Nov. 6 and win the race, capped off 13 months of career running.

She won the 2017 Lisbon Half Marathon by one second in the time of 66:54. Three of her half-marathons are listed in the top-29 performances all-time.

Jepchirchir will now rest and recover from 13 months of world-class training and racing and plan to tackle marathons for 2022, which, we do not know just yet.