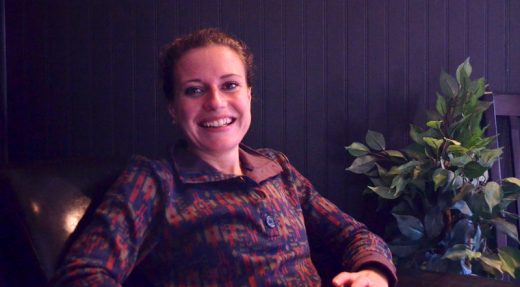 “If you can’t remember a runner’s name, ask them how their injury is.”
-Arthur Lydiard

Canada’s fastest 5,000-metre runner, Jessica O’Connell of Calgary, is coming out of the fall, fit with her recent injuries behind her. She is also symptom-free from a December 2016 concussion – well in advance of her prime racing season of outdoor track.

“Yes, I am finally injury free, touch wood,” shared the 28-year-old. “It has been two years of a pattern of injuries and I feel I am past the latest, which was a glute, lower-back issue.”

O’Connell, who has a master’s degree in exercise physiology, was in Victoria to spend time at the Canadian Sport Institute Pacific (CSI Pacific)to get an assessment and run some tests. Canada’s top exercise physiologist Trent Stellingwerff was part of that process.

“Trent is so great at explaining things in a way that it makes it easy to understand,” shared O’Connell. “I just had a good V02max test and the other day ran an interval session on the track that went well, so that was a check mark,” she added, waving the air as if to make an imaginary check mark on a list of things to accomplish before declaring herself healthy.

During her “bread and butter” interval sessions, O’Connell, coached by Mike Van Tighem, runs one-kilometre repetitions near 5K race pace off of three minutes of recovery. The fastest any time of year might be right at 3:00/per km. Her latest workout went well at approximately 3:05/per km.

She accomplished her personal best of 15:06.44 in May of 2015 at the Payton Jordan Invitational.

“That was a case of everything coming together in a race that had the right competition for me and a race where everyone went out to get a fast time. I had a consistent build-up to Payton and had just come down from altitude at Flagstaff, AZ,” she said.

O’Connell has since represented Canada at the 2016 Rio Olympic Games, 2017 London IAAF World Track and Field Championships and then she won a silver medal in the 2017 University Games (FISU), clocking a 15:50.96 in a tactical race.

“I wanted international experience, but where I wasn’t overwhelmed by the size of the event, like at the Rio Olympics or London Worlds. I wanted to have a sense of control, so I think FISU was a good experience for me. If the timing of it had been flipped (running FISU before Olympics) it would have been even more valuable,” she emphasized.

Laughing she said, “plus, I was about as old as I could possibly be to compete in the event. I felt like a grandmother out there,” (she looks like a teenager).

O’Connell has had the usual bout of injuries, hip flexor, calf and groin, but a concussion is more of a hockey or football injury.

“There was some confusion about who was in which lane at a workout and another athlete and I crashed into each other. After that I had a month of nothing, I wasn’t allowed to run at all, and then I had five weeks of easy jogging.”

Smiling for a photo she said, “I am missing a bottom tooth, I have to get it replaced, so I am hiding it from the picture.”

It gives the diminutive athlete a sense of character. She should smile at her competition to let them know she is there with a purpose.

Comparing Rio to London, it was about tactics, London went out pretty fast from the gun. Rio was slow to start, perhaps as slow as a 90-second first lap.

“I remember being fairly comfortable at the beginning of that race. London had a faster start for sure.”

Asked if Calgary is permanently home she said, “Yes. I have a great network set up there with a really good physio, some training partners and there is the speed-skating oval for indoor workouts. It is a 450m track. My parents are from the east, but I was born and raised in Calgary.”

Some of those training partners are well-known Canadian runners like Maria Bernard, Melissa Jones, Bridget Pyke and Shari Boyle.  “They are great and sometimes I work with the guys where I can.”

O’Connell runs up to approximately 135K/week but doesn’t love the long runs.

She won’t be targeting sub-15:00 specifically during the spring of 2018, but if the opportunity to race that fast comes, of course, she will go after it.

“Getting into a race that goes out at just under 15-minutes is difficult to find. There are a lot of races where the field goes after 15:10 to 15:20, or well under 15 in major competitions – those races would leave me in no man’s land.”

O’Connell may just find herself in the right situation this spring as she won’t be representing Canada in 2018. Due to injury as well as a qualification standard that was a moving target for Commonwealth Games, she is left on the sidelines. Another Payton Jordan is coming up in May – a notoriously fast event. Europe is calling and there are some fast races over there as well as money to be made.

“Yes, so this year is about getting a fast time.”

Commonwealth Games athletes had to be within 2% of the fifth-ranked person in the world, which ended up being about 15:04. “There is nothing I can do about it, so I am not dwelling on it.”

Typically, a set standard is indicated well in advance and as long as an athlete declares their intention to compete, clears the time barrier and is at least the third-fastest in the country, they get to go. It is not a perfect system as standards are set against current world best times and recent international competition, which is often accomplished by athletes who are drug cheats.

The 2% of the fifth-best in the world standard can be subject to drug-aided performances even more so, but it was not something that O’Connell was going to discuss.

The 2018 IAAF Continental Cup is coming up in Ostrava, Czech Republic. The two fastest athletes per continent can be nominated, which means one from Canada and one from the US.

Meanwhile, O’Connell is coaching on the side. With her international experience, master’s degree and relationship with Van Tighem and Stellingwerff amongst others, she is well versed in the sport.

“It’s called Grit Coaching. We do it online, so we can coach from anywhere, which works with my life schedule.  My partner is Faye Stenning. We met in junior high school. She is this crazy, world-class obstacle course racer and is on the pro Spartan Racing Team.”

The two coach a mix of marathon runners, Spartan or obstacle course racers as well as people just wanting to be fit runners.

As for O’Connell’s elite racing career, 2018 may be a big year for her – as long as she stays off the injury list.

“I put a lot of pressure on myself to have good workouts and to know that I am fit and ready and it is a relief to be injury free and moving towards good fitness.”

“I don’t think my best races are behind me.”